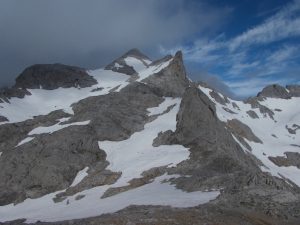 [Sorry for the lack of place-names, but this was written with super-slow internet access, because Ailefroide is like that. Also, not all the photos uploaded. — ed.]

This was supposed to be the day for me to climb Torrecerredo, the highest summit in Picos de Europa. However, a combination of a less-than-awesome map, unsettled weather, and general wussiness led me to instead tag this consolation peak, which had a good view of what I should have climbed. 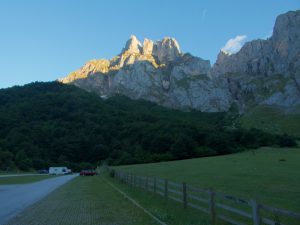 I picked up my rental car in León, then managed to escape the city without getting lost or in a wreck, no small feat. Once on the open road, I had a chance to relax a bit and get used to driving stick as I made my way to the eastern side of Picos de Europa. The first part of the drive was familiar, while the second part became new and interesting as I climbed the gradual side of a pass, then descended a windy, switchbacked, lane-and-a-half road down to the edge of the park. I wasn’t sure about the dirtbagging situation, as this part of the park seems more developed than Valdeón. I was momentarily dismayed to see a “no overnight RV parking” sign at the entrance to the large lot near the tram, but then I saw several RVs blatantly camping there, so I figured I would be fine curled in the back of my little Citroen. 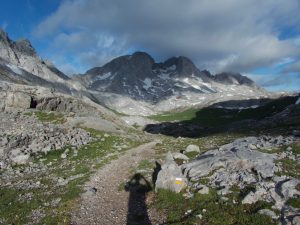 My crappy map (the “global topo” from Peakbagger) showed two similarly-long routes leading toward Torrecerredo from this side, and lacked contour lines over much of the relevant area. Somewhat arbitrarily, I chose the one to the west. It started out nicely, with efficient switchbacks leading through a break in the cliffs ringing the valley. I enjoyed a jog around a meadow in a high valley, home to some cows that I heard but did not see, then began regretting my route choice. 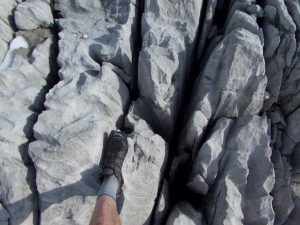 I passed a single man putting a junction sign back in place, then began climbing to a col. I quickly found myself on solid snow, reduced to following the line on my crappy map, an occasional cairn on an exposed outcropping, and bits of what might have been an old boot-pack. The route was up and down and generally slow: even when I was not trudging through snow, I was making my way across limestone slabs eroded into small, sharp fins that would do some serious damage if I tripped and fell. 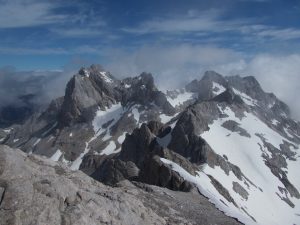 By the time I reached the col where I could finally see the semi-famous cliffs of Naranjo de Bulnes, it was late morning, I was low on food, and it looked like the forecast rain might arrive. Rather than simply head home, I decided to tag the peaks on either side of the col as a consolation prize, Torre de los Horcados Rojos and Pico Tesorero. The former was pretty lame, a minor bump on a ridge, while the latter was a semi-legitimate peak, with good views of Torre de la Pardida and Torrecerredo to the north, taunting me in the sun.

I took some frustrated photos, then boot-skied down to the trail, this time taking the eastern trail, which leads past the top of the tram. As I should have guessed, this trail was easier, better-maintained, and well-used, and I passed crowds of tourists as I drew close to the tram. Rather than doing the obvious thing and following the trail down from the tram station, I trusted my evil map again, taking a more direct “trail” that dropped basically straight down a narrow cleft that I would never have otherwise attempted. It was steep and slick, but efficient, and it even had a decent hand-line to get around a waterfall and chockstone. Below, I chased a chamois for a bit, then managed to touch some plant that gave me an itchy rash for the next hour before reaching the real trail. With my new firsthand knowledge, I could have stayed around another day to tag the highpoint, but I was getting impatient to reach the alps, and would have been bored hanging around an entire Spanish afternoon, so I decided to take a chunk out of the painful drive to eastern France instead.

Climb out of the valley