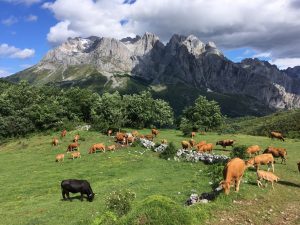 Picos de Europa’s highest peaks are somewhat of a slog from Posada de Valdeón, either from a low trailhead along the road to Caín, or by a circuitous route from the road to the northeast. However, I saw nearby Torre de Friero mentioned on a map in town, and the morning forecast looked okay, so I figured that Mike and I could knock it out in a morning. Things mostly worked as planned, and we made it back before the noon-ish checkout time. 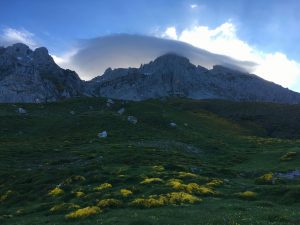 We hiked the familiar pavement up to Prada de Valdeón, dirt road/trail up past various huts, and various cow-trails roughly corresponding to the route on my map, sometimes following yellow and white stripes on rocks and trees. We continued past our previous highpoint to where there was supposed to be a trail junction, but found no sign of our desired route. There are many more cows than people in these hills, but unfortunately they just want to eat, so since there is vegetation everywhere, they are lazy and only create horizontal paths. We wanted a vertical path, so we had to make our own, stomping through obnoxious broom until we got into a steep, grassy gully.

We saw a few chamois higher up, and began to run into their faint trails and a few cairns. I continued following the supposed route, and was eventually rewarded by finding a faltering line of cairns and yellow paint dots a half a kilometer or so southeast of the summit. Things turned more fun, with some class 3 limestone in places, as we made our way up along the south ridge. 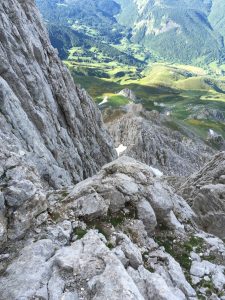 I lost the cairns at some point, and both Mike and I ended up facing unappealing options below the summit. It was getting near turn-around time but, traversing back right, I found a couple of cairns and a class 3 route that looked reasonable. The limestone was mostly solid and fun, but there were enough loose rocks lying around that the follower ran some risk of getting brained. At a short class 4 step, Mike decided that it was late enough, and/or that he did not want to get written up in Accidentes en Alpinismo de España for no lleva casco. 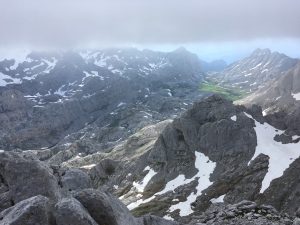 That was a shame, because it was only 6 minutes to the summit, with some fun class 3 above the step, followed by an easy boulder hop. It was cold, though, so I only stayed for a few seconds to snap a few photos before descending as quickly as possible, making sure that Mike was clear before raining death ahead of me. I eventually spotted him descending a grassy gully below our line of ascent. I am normally wary of blind descents, as they have a tendency to cliff out, but he thought this one would go, and was more direct. He was right on both counts, and with only a few slips on the grass and shrubbery, we made it back to the trail, then jogged the roads home in time to shower and pack without angering the housekeeping lady.