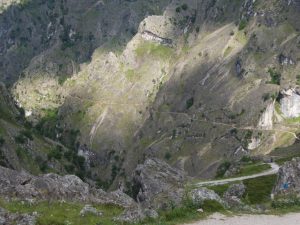 After taking care of various errands in León, we drove up to Picos de Europa, Europe’s oldest national park, arriving in Posada de Valdeón
sometime before Spanish dinner. The weekend forecast predicted a
significant amount of rain and thunderstorms, but I still hoped to get in some peak-bagging, or at least to see some peaks. While it would have been easy to dirtbag it by myself in the area, Mike and Linda would not have put up with it, so I stayed in a hotel and even had the prix fixe dinner at a restaurant. My chosen dessert course was a scoop of the local (and supposedly famous) Valdeón cheese, which was like a soft, pungent Roquefort, best eaten diluted onto crusty bread. 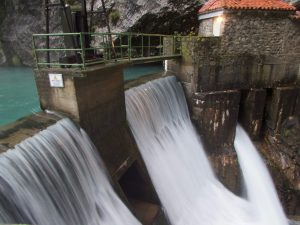 Saturday dawned looking like an indoor day, but Mike and I set out downhill anyways, first driving the steep, winding road down the narrowing canyon to Caín, then continuing along the Ruta del Cares, a trail along a canal mysteriously paralleling the Rio Cares toward the Atlantic. Both trail and tunnel were built around 1920; as was then typical with ambitious construction projects, around 40 people died in the process. As we started out, the river was clear and swift-flowing, with a tinge of the blue typical of a glacier-fed river: the Picos were home to some glaciers in the not-too-distant past. 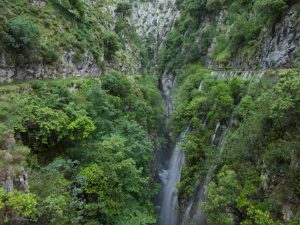 Both trail and canal are carved high into the walls of the narrow gorge, while the river drops away below. The trail starts off as a series of tunnels, with occasional tunnels and half-tunnels continuing along the way. The canal is similarly built, with overflow slots to limit the amount of water that makes it downstream. This being the melt season, many of those slots spouted waterfalls down to the river. The many warning signs along the canal alerted me to the fact that this would be an amazing inner-tube run later in the season, when the water might be low enough to avoid being drowned in the canal’s tunnel portions. 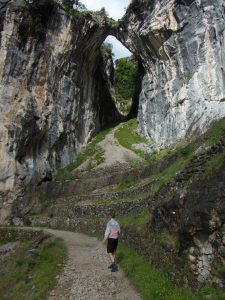 The rain started a short ways down the canyon, and soon became steady and drenching, filling the trail with puddles. I had fortunately brought my poncho, Mike had a semi-waterproof cycling jacket, and the air was warm down below 2000 feet. Still, I hate being wet, and probably would have turned around if Mike were not along. I am glad I did not, because the trail and gorge are both worth seeing, and because the rain stopped after about an hour, and mostly held off for the rest of the hike. 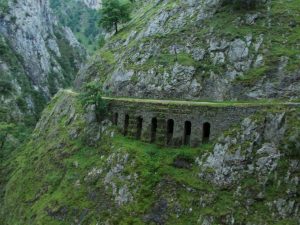 After contouring along above the river, the route drops about 1000 feet to the trailhead at its north end. A serious-looking ranger warned us about the rockfall danger along the trail, but couldn’t really do anything to us when we told him that we were returning to our car at Caín. We jogged many of the flat and downhill sections on the way back, passing many more tourists than on the way out, and reached the trailhead late in the morning. Despite the weather, the town was becoming overwhelmed, with groups of old Spaniards, some German-looking motorcyclists, and an American tour-guide explaining to her flock how to adjust a backpack. 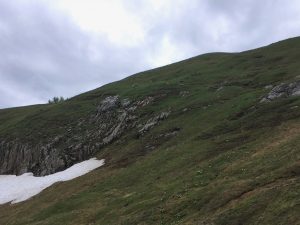 Afternoons are long in Spain this time of year — sunrise is around 7:00, sunset around 10:00 — so I decided to check out a trail I had seen across the river from Posada de Valdeón. Not sure what I was doing, I started out with just my phone and a water bottle in hand. Like many area trails, this one started out as an old roadbed to a water-tank, then became fainter as it continued above cow territory. However, it was extravagantly-cairned in most places, so I had little trouble following it as it traversed back south, then climbed up along a scree-chute and crossed to a bench hidden from town by some cliffs. 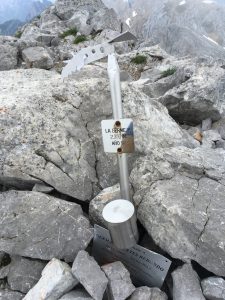 Near the top of the bench, I flushed a herd of Cantabrian chamois (rebeccos), which look like a cross between deer and bighorn sheep, and are remarkably fast on turf, scree, and rock. The weather continued to be iffy, but it did not look like serious rain, so I paged around the map on my phone, and decided to try climbing El Bermeja. The trail continued to a point south of the peak, going over and around some lingering snowfields, then faded without a line of cairns. I traversed and climbed around west, ascending a class 3-4 slot and class 2-3 ledges. While it creates imposing cliffs, the limestone also seems to create solutions to such problems.

The weather seemed to be turning as I topped out on a ridge near the summit, so I wasted little time jogging and scrambling to the top. I found a fake ice axe, a shiny summit plaque, and a register canister holding a few wet business cards, a novel yet reassuringly familiar marker for my first European summit. Worried about the rain and cold — I only had shorts and a t-shirt — I spent all of 30 seconds taking in the limited view before trying to lose elevation as quickly as possible.

I had seen a cairn near the top of a snowfield just below the summit, so I decided to descend that way, carefully sliding more-or-less directly toward my roundabout ascent route lower down. I made my way back to the trail on a mix of snowfields and horrible limestone scree, then hike-jogged past the chamois toward town, taking a more direct trail lower down. The whole descent took about 1h20 — not bad for 4300 feet — and landed me in town with a few hours to rest and clean up before dinner.