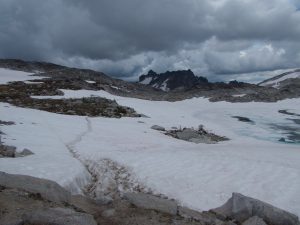 McClellan Peak, southeast of Asgard Pass, is one of the more remote peaks in the core Alpine Lakes Wilderness. It can apparently be approached either via the Snow Creek or Colchuck Lake trail; I chose the latter, because it is familiar and higher. To get my money’s worth from the approach, I had hoped to harvest neighboring Enchantment and Cannon Peaks as well; unfortunately, afternoon thunderstorms and a bit of a lazy start ruined that plan. 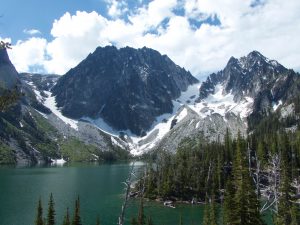 I made my way up the popular trail to Colchuck Lake, backed by the buttresses of Dragontail Peak’s big north face, passing several parties camped along the shore. Following some cairns through the boulder-field at the head of the lake, I lost and then picked up one of the numerous trails leading to Asgard Pass. I passed a couple of slow backpackers on the 2000-foot climb, then stopped at the top to eat, plan my route, and watch the too-friendly mountain goats common to the area. 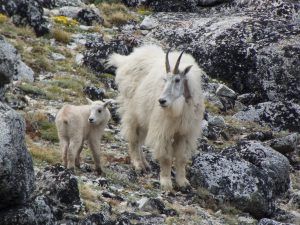 Beyond the pass, I began running into a surprising number of early-season campers, their tents perched on various rock outcrops peeking out from the snow. I followed bits of trail and boot-pack part of the time, and the path of least resistance otherwise. I had thought of tagging the poorly-named Little Annapurna on the way out, but it has less than 300 feet of prominence, and is so unremarkable from the north that I passed it before I noticed. 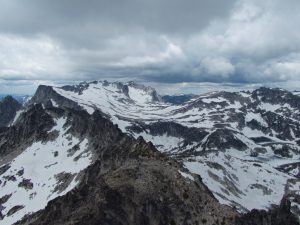 Once I realized this, I shrugged and continued toward McClellan, on the other side of Crystal and Perfection Lakes. There is a bit of a cliff band to negotiate on the direct line toward the peak, but it did not slow me down much, and I was soon diagonaling toward the north ridge across mostly snow. I followed either a boot- or goat-track to the ridge, then scrambled up rock as the snow steepened. From the top of the ridge, the summit is a short krummholtz-whack and a bit of class 3 scrambling away. Prusik Peak and the Snow Lakes looked particularly impressive from the summit, while Cannon just looked far away. 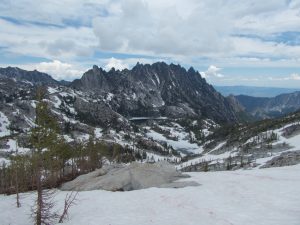 I retraced my route partway, then slid down to just below Sprite Lake, where I picked up the trail to the signed intersection with Prusik Pass. The weather was looking less-than-excellent, but I thought I might escape with just a minor shower. Sadly, it began raining in earnest as I reached the pass, with a long snow traverse remaining between me and Cannon. Fortunately, I ran into three guys who had just come off Prusik, sheltering under a bootied rain fly held aloft by a couple of trekking poles and various guy lines. I sat in their shelter and talked for a bit, hoping the showers would pass quickly. They told me there was another party climbing Prusik, whose leader at one point yelled that he “needed electrolytes!” That’s a new one…

When it looked like the storm would continue awhile, I put on my poncho and headed for home, feet unpleasantly cold as I postholed through the surface slush. I was cheered a bit by a nice boot-ski on the snowy side of Asgard Pass, where the rain had stopped, then wrung out my socks at the base and hike-jogged the miles back to the trailhead. The day ended up being about 18.5 miles, and would probably have been 20-21 with the other two peaks — not bad.

Cannon in the distance