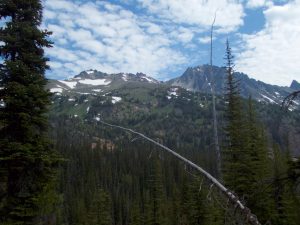 With unfriendly weather continuing for the foreseeable future in the Tetons, I made the long drive to the dry eastern side of the Cascades. It was more likely to be sunny, and rain wouldn’t matter as much with the lower elevation and warmer temperatures. The area around Leavenworth has both good camping and a number of easy unclimbed peaks on Washington’s top 100 list. Cashmere is probably the easiest, a hike up the trail toward Windy Pass followed by a bit of cross-country travel and a short class 3 scramble. Eightmile Creek has burned recently, so the generally east- and south-facing trail can be brutally hot. Fortunately, partial cloud-cover kept temperatures bearable on my visit. 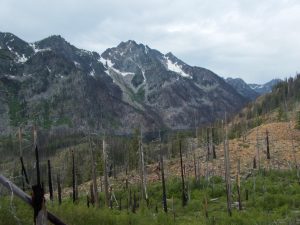 I got a bit of a late start from the popular trailhead, passing a couple of backpackers on the way up Eightmile Creek. I turned up the trail to Lake Caroline to grind out almost 2000 feet of elevation, reaching unburnt woods just before the lake. I passed a few tents at an established spot, then continued climbing gradually through the woods toward the pass. I finally left the trail in an open basin around 6800 feet, making my way toward Cashmere’s long west ridge near Point 7555′. 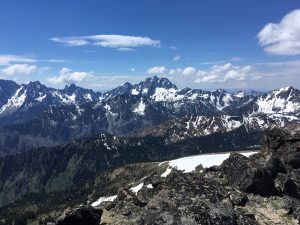 Here I found a faint trail, one of two leading toward the peak. It is still somewhat early season in the Cascades, especially in a normal-to-heavy snow year, so the ascending traverse was a mixture of well-consolidated snow, scree, and talus. The snow was welcome on the ridge, though slightly less so on the final summit scramble, where I sketched across a couple of couloirs and otherwise stuck to rock ribs on the peak’s north side. There was no register on the summit, but only a disgusting mass of (breeding?) ladybugs. I had a snack at a safe distance, then returned to the ridge. 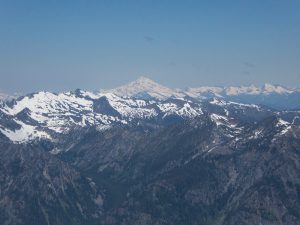 I had seen another trail on my way up, leading more directly toward the trail near Little Caroline Lake via the ridge extending south from the first bump west of the summit. The trail disappeared partway down, but it was easy cross-country travel back to the trail around 6800 feet. I made my life unnecessarily hard by “shortcutting” through the woods below that, but thanks to carrying a map and GPS these days, lost little time. There were more tents at Lake Caroline in the afternoon, but no people nearby. I met several groups making the now-baking commute up the Eightmile Creek trail, either for the day or overnight, and was back at the car by early afternoon, one more peak in the bag.

Enchantments from Dragontail to Stuart