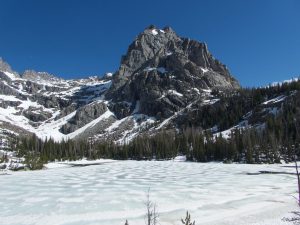 Mount Cowen is the highpoint of the western Beartooths, which line the eastern side of the Yellowstone River valley between Yellowstone National Park and the town of Livingston. It is the highest of a ring of granite spires, with a class 3-4 route to its summit on generally good rock. Many of the other spires are quite impressive, especially Point 10,814′, which rises over 1000 feet above Elbow Lake. 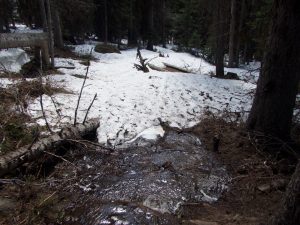 Sometimes the snow works to your advantage this time of year, covering scree or deadfall. This was not one of those times: though the trail was generally dry and well-maintained at first, the two miles or so of snow between where it enters the Elbow Creek drainage and the far side of Elbow Lake (8000-8500 feet) were posthole hell, ranging from ankle- to crotch-deep. This made a straightforward day a bit more of an ordeal than I had expected, but it was probably good for me, and the views were worth it. 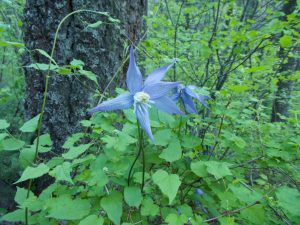 I started off from the East Mill Creek trailhead around 6:00, hiking the trail as it contours high on the south side of the “creek” to avoid a large inholding. Fortunately there is a sturdy bridge near the junction with the Elbow Creek trail 1.5 miles in, because there was no way I would ford Mill Creek. I had not paid much attention to distances, and was slightly nonplussed to discover that it was another 6 miles to Elbow Lake. 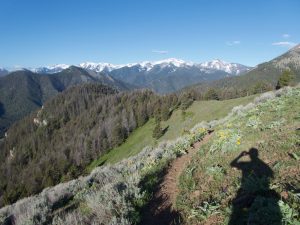 The first part went easily, as the trail steadily gained elevation up Upper Sage Creek, traversing the east side before crossing to switchback into open meadows on the west. The trail sees quite a bit of stock traffic, which means that there were few blowdowns, but also that the surface was destroyed where thoughtless equestrians had used it while muddy. There were also plenty of elk and bear prints, though none as big as the grizzly prints I recently saw on the way to Jackson. 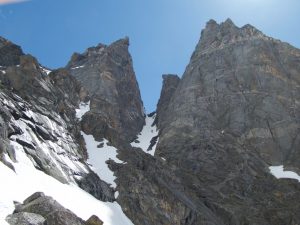 Things abruptly started to suck as the trail crossed over a promontory onto the north-facing slope above Elbow Creek. I managed to make my life slightly less wretched by trying to follow what looked like an old skin track, which hardened the surface of the snow enough that I often did not break through. The elk were apparently not smart enough to do this, so they simply postholed through. 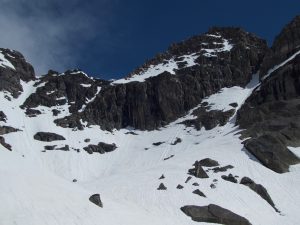 Finally reaching Elbow Lake, I was impressed by a sheer spire that I thought might be Cowen, but was actually the subsidiary 10,814′. I slogged around the lake, and finally saw my lot improve slightly as I reached the avalanche fans from the amphitheater above the lake. I followed one slide path toward the still-hidden summit, taking rock bypasses where I could, which were still faster than snow on the way up. Finally, less than 1000 feet below its summit, Cowen’s south face came into view, looking just as described online. 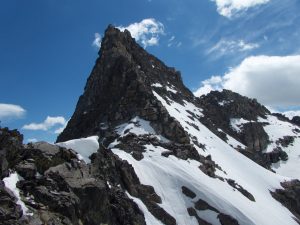 I thrashed up some softening snow to the base of the recommended couloir, then decided that I would prefer the rock to its left. This turned out to be some fun, solid class 3-4, and deposited me at the saddle before the final summit ridge. There is supposedly a mostly class 3 route on the south face, but it seemed like it might be more fun to stay on the ridge. I mostly succeeded, with a bit of extracurricular fifth class and a few deviations near the top.

The summit looked like it even had a Sierra-style fifth class summit boulder, which I climbed, only to see a cairn on a nearby, easier flat spot. I scrambled over there, then tried to enjoy the views quickly, as it looked like a storm might be coming in from the southwest. I tried to find the “standard” route on the way down, and though I found a few cairns, there did not seem to be an obvious easy line.

I took the couloir on the way down, carefully plunge-stepping the steep and inconsistent snow up high, bypassing a pinch point on rock, then plunge-stepping and occasionally boot-skiing back to the upper end of Elbow Lake. Maybe the intermittent clouds helped, because the snow in the woods had not deteriorated as much as I had feared. The slog back to dry land passed without too much pain, except for me getting stupidly lost in the woods when I tried to take a shortcut near the end. I wrung out my socks, switched to shorts, and had a fun run down the trail, continuing to mostly jog along Mill Creek to the car. Hopefully the weather will behave itself enough to get in a couple more days in the area…

Lots of that flower