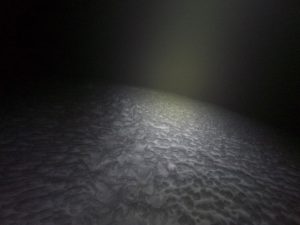 Cotopaxi is an almost-perfect cone rising 7000′ from a 12,000′ plain, clad in snow and shrinking glaciers. Though it is not Ecuador’s highest mountain, it may be its best known and most sought-after. It is also a fairly active volcano, and although it has been open to climbers since last October, the stink of sulfur was distinctly unpleasant even at the hut. I had about 3,500 feet to climb from the hut to its 19,300′ summit. Given my performance on Orizaba, and my understanding that the snow turned to horrible mashed potatoes once the sun hit it, I conservatively allotted four hours for the climb, starting at 2:30 AM. 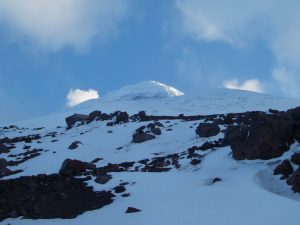 Burrowing into my bunk at 9:00, I set my alarm for 2:00 AM and pretended to get some sleep. This was of course impossible, since I had forgotten my ear plugs, and guides allocate 6+ hours to drag clients up the peak. So I lay in bed until 11:00, listened to people clomping up and down the stairs in rented plastic boots until 12:00, then lay in bed until 2:00 before suiting up for the climb. Unsure what to expect, I dressed more warmly than I had for just about anything else: long johns under soft-shell pants, four layers on top, double socks with bread bags in between on my feet, and chemical hand- and foot-warmers in my pack just in case. 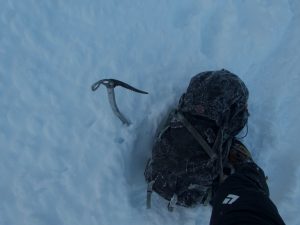 I moved fast through the common area, worried that some official-ish person would try to stop me, then stopped at the bucket-flushed toilets before heading up the boot-pack. There are two semi-standard route up the peak: a direct one through the crevasses, and a longer one to the right which mostly avoids them. Being solo, I started up the latter, but ended up following a slightly more direct boot-pack with only two crevasse crossings. I put on some aggressive music, and was prepared to try to outrun anyone who shouted at me for breaking made-up laws, but none of the groups I passed gave me any trouble. The lower climb was surreal, slogging up a high-altitude snow slope under the light of the moon, stars, and headlamps of the groups ahead of me. My super-bright BD Icon headlamp contended with my tinted goggles, and the swirling clouds deposited frost on my jacket.

I eventually passed the leading group, and was on my own below the northwest ridge. The big crevasse below the ridge was nicely bridged. I panted up the steep snow-slope above it, then continued to follow the tracks along the ridge’s right-hand side. The sulfur fumes were unpleasant, but not bad enough to make me gag or vomit. I suffered from the altitude on the steeper pitches, but the temperature was just about perfect, cold enough for the snow to remain solid, but warm enough for my hands and feet to be comfortable.

At around 5:20, I reached something that seemed like the summit, though it was both cloudy and dark. I had badly overestimated the time it would take me to complete the climb. Since I would never return to this place, and had plenty of warm clothing, I put on my down parka, turned off my headlamp, and sat on my pack to wait for sunrise. 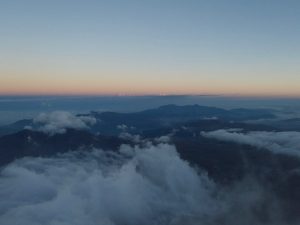 I stuck around the summit until about 6:00, occasionally stomping around to keep my feet warm. I had hoped to see the classic sunrise shadow on the plains below, but the peak was creating its own clouds, so I eventually gave up and started descending without even seeing the summit crater. I passed two Americans on the way, wearing masks against the sulfur, who were probably the only others to summit that day. The clouds broke up a bit at sunrise, allowing me to see some of the neighboring volcanoes, but it was getting colder as I descended, so I hurried back to the hut.

The Canadian woman was waiting outside the hut; she congratulated me on my summit and informed me that her Danish companion had succumbed to the altitude. His 30-year-old rented plastic boots, non-waterproof army suit, and wooden-framed pack might have also contributed. I hung out in the hut for awhile, eating an undeserved, weirdly meatless tamale, then embarked upon an odyssey toward civilization and the next mountain.

One response to “Cotopaxi”