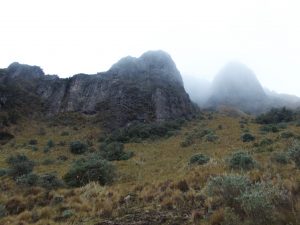 [I would have more photos for this mostly-boring entry, but my phone croaked. — ed.]

It started raining off and on around 2:30 AM at Laguna Mojanda, so for the rest of the night I did not sleep so much as cower in my bivy, managing the wetness trade-off between rain and condensation. During a short break in the rain around 7:00, I quickly packed up and hit the road, climbing one more rolling hill around the lake, then passing the turnoff to the refugio on the longer climb to the high-point near Cerro Negro. Near a shelter at the crest, I startled what I think were two Caracaras, a colorful type of Andean raptor, which flew off before I could get a photo. 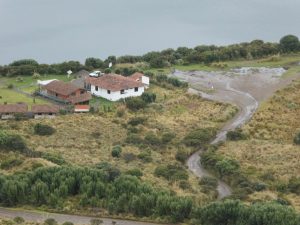 Just past the crest, I stashed my pack in the grass and carefully made my way up the pseudo-trail to Cerro Negro’s summit. This would normally be an easy climb, but with the fresh precipitation, it had turned into third class grass and mud, making the climb and especially the descent a bit tricky. The final ridge included several false summits and a bit of third class rock, tempting me to turn around early, but I persevered to the true summit, took in the non-view, then carefully returned to my pack. 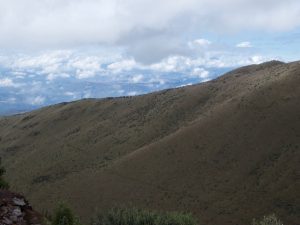 About half-way down the road-walk to Tabacundo, a rental car pulled over and the driver rolled down his window to ask a question. After a bit of language negotiation, we determined that our best means of communication was French — he and his wife were from Marseille. On the one hand, this helped us communicate, since my French is much better than my Spanish; on the other hand, this really messed up my Spanish-learning effort, refreshing my confusion of both vocabulary and pronunciation. It was worth it overall, though: after realizing that their rental car would not make it anywhere near the lake from this side, they gave me a ride about half-way back to Carcelen.

Returning to the airport earlier than expected, I took a shower, changed into street clothes, retrieved the BBoG, and hired a cab to the fancy downtown hotel Ted had arranged with point shenanigans. Thanks to the ride from the French couple, I had some daylight to kill, so I decided to do a couple errands. I quickly found cheap groceries along Avenida 6 de Diciembre then, with a bit more searching, found a mountaineering store that sold expensive gas canisters. I deposited my goods at the hotel, then went out to find dinner and check out the city. It was a Friday night, and Quito seemed to be a happening place, but I was there to stand on top of piles of dirt, not to party.