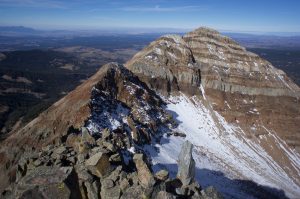 The La Platas are an isolated group of 13ers west of Durango, unconnected to the rest of the San Juans. The rock varies widely, from solid granite to nasty red and white choss. I had visited in May 2016, coming in a long dirt road from the west to climb Sharkstooth and Centennial in the snow before being defeated by the ridge between Centennial and Lavender. This time I came in from the east, ascending Tomahawk Basin and traversing across Moss and Lavender to reach Hesperus, the range highpoint. I was planning to also tag Babcock and Spiller, but lacked the energy after some route-finding shenanigans. 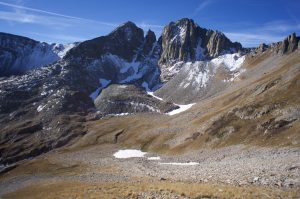 There is not much in the way of parking at the junction of the La Plata River and Basin Creek roads, but I found a wide flat spot to sleep, then got a lazy start around 8:00. It had reached 70 degrees in Durango the day before, and it was calm and pleasantly warm once I reached the sun. I followed the old road to the Tomahawk Mine, then found a faint, occasionally cairned trail continuing up the drainage to the Little Kate Mine. Expecting the choss-piles I had experienced on my last visit, I was surprised by Babcock’s sheer north face, and the cliffs and pillars on the ridge leading to Moss. 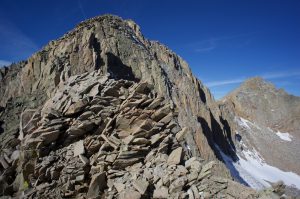 Trying to be clever and save time, I headed straight northwest toward Moss’s summit, finding mostly turf with only a bit of loose talus. Unfortunately, Moss’s east ridge and southeast face are quite steep. After some shenanigans along the ridge, I retreated a bit, then found some fun, steep, blocky low fifth class climbing on the southeast face leading to the summit. The descent toward Lavender was an easy talus-hop, as was most of the climb. Near the top, I found a short third class scramble and a move onto the summit block. Leafing through the register, I saw a couple familiar names (hi, Bob!), and was impressed that someone had apparently arrived via the north ridge, which had defeated me before and still looked intimidating. 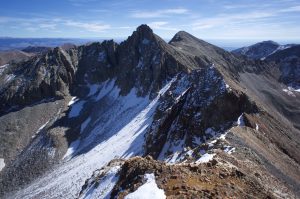 The traverse to Hesperus was supposed to be tricky, but I found it straightforward, with a bit of optional third class climbing getting through some notches. The rock sharply changes from nice granite to layered red and white choss partway along the traverse, so the best route stays near the crest to avoid sliding talus. I found a solid wind-break on the summit, and a bit of a trail for the standard route up the west ridge.

I retraced my route partway, then side-hilled across the south side of Lavender and Moss before descending Moss’s south ridge. I thought about climbing Babcock, but its northwest face looked steep and snowy, so I wussed out and dropped down a chute to Tomahawk Basin, taking the trail and road back to my car.