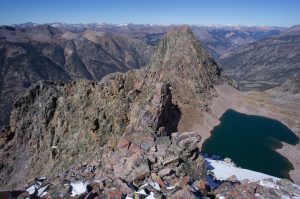 Unlike most of the rest of the San Juans, which are made of relatively recent volcanic choss, the Grenadiers are an uplift of ancient bedrock. This is most obvious when looking at the central peaks, Arrow, Vestal, and Trinity, in which the bent rock layers are clearly visible. They are also hard to reach, being separated from the road by the 1600-foot-deep Animas River valley, and not along any maintained trail or abandoned mining road. Though the climbers’ trail into Vestal Basin to the north is much easier to follow than it was when I first visited in 2012, there are no 14ers in the area, so it thankfully has not been “comfortized” by CFI. On my previous Grenadiers visits, I tagged Arrow, Vestal and Trinity, and the eastern peaks from Storm King through the Guardian. This time I came for the western peaks: Electric, Garfield, and Graystone. Being closer to the car, I thought these would be a shorter day, but thanks to some awful terrain, they took a bit longer than the central peaks. 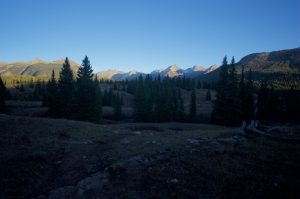 It was somewhat cold sleeping near Molas Lake, not enough for my water bottle to freeze, but enough to freeze my Camelback hose, frost the inside of my windows, and force me to fully mummify my sleeping bag. Still, I forced myself out of the car and onto the trail by 5:40 for the usual nighttime commute across the Animas. There was no one camped along the Colorado Trail, and no footprints in the dusting of fresh snow as I climbed to Vestal Basin — I had the range to myself. 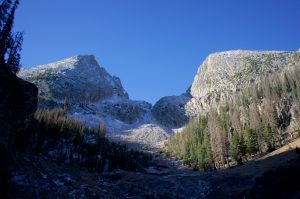 I left the trail where it turns east near Arrow, aiming up talus toward a notch between Arrow and Electric containing a permanent-looking snowfield. The talus started out well-behaved, but quickly turned awful. Not liking the look of the notch, I headed to the right, at one point comically falling off a beachball-sized boulder as it slowly rolled beneath me, bruising my thigh. The suck continued up Electric until I eventually gained a third class rib on the south side, which I followed to near the summit. I found two registers: a wad of wet but legible paper in a PVC tube, and some dry pages from a Simpsons calendar in a salsa jar. I have seen a similar Simpsons register on another peak in the area, but I don’t remember which. 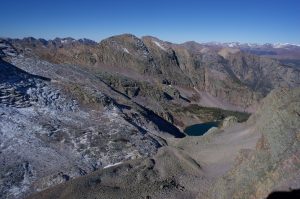 Garfield and talus-bowl from Electric

I made my way down the choss toward Graystone, then headed west through the talus-bowl toward its northwest side. Without the snow, I could probably have walked up slabs to its north ridge, but the fresh snow made them slick and impossible. I ended up walking all the way around, to a point where it made more sense to tag Garfield first, then traverse back east along the connecting ridge. I passed “Garfield Lake” on pleasant, dry slabs, then made my way up a turf-y gully to the ridge, where I finally found some fun. 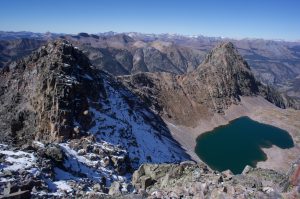 The traverse out to Garfield was mostly class 2-3, with one fourth class step that could probably be avoided to the right. I tagged the closer, higher-looking point, then spent 20 minutes tagging the farther one, which had a cairn. The traverse back to Graystone over “Point Pun” was mostly fun class 2-3 on solid rock, with the best line staying near the crest except for detours around a couple notches between Pun and Graystone. 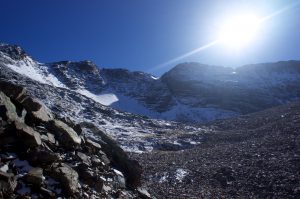 I planned to return by descending a snow gully between Graystone and Arrow. Unfortunately, I did not traverse far enough — the easiest gully descends from the low point of the ridge — and did some sketchy downclimbing on a mixture of crusty powder, choss, and hard older snow. It was slow, careful work, but I eventually made it back to the talus bowl, hacked through some ice to replenish my water, and made my miserable way back down the talus to the trail. I went straight through the notch this time, finding a suitable passage in the moat west of the permanent snowfield. I again had the trail to myself on the way home, reaching the car a bit after sunset, in time to eat dinner and watch some TV before another cold night at the pass.

Garfield and talus-bowl from Electric