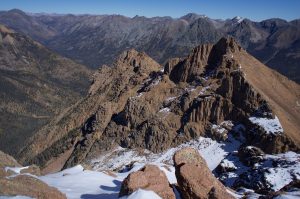 As is becoming tradition, I am spending some time in the best part of Colorado (the Weminuche) at its best time of year (late September and early October). I had been impressed by Organ Mountain on the hike up Johnson Creek last year, so I looked at how to tag it this year, and decided on an approach via Endlich Mesa, a new trailhead for me. The road was supposedly “4WD strongly recommended,” but I decided to give it a try anyways. While it is no Como Lake road, it turns out to be awful, with sharp rocks just large enough that I only managed two of ten miles before chickening out and sleeping in a pullout. There is apparently another approach from the west via easier roads, but it was too late for me to drive around. 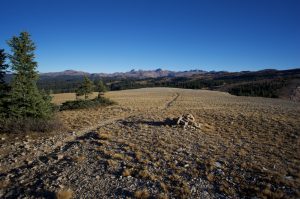 I woke at 5:00, and was on my way up the road by headlamp by 5:30. There is a use trail that shortcuts the road’s maddening switchbacks, but I did not find it in the dark, so I had a long walk before I even reached the official trailhead. The trail starts out somewhat confusing and badly rutted, but all trails seem to lead to the same place, and I eventually emerged from the trees to see a multi-lane pack trail snaking across the endless rolling grass of Endlich (“Endless”) Mesa. 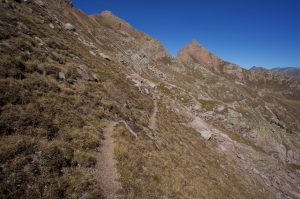 I hike-jogged along the trail to where it drops down to the Durango reservoir, then continued traversing on a well-defined trail to the saddle southwest of Sheridan Mountain. This trail continues through the saddle to traverse Sheridan’s east side to the saddle to its northeast. I could not tell if it was a use/pack trail or one of the area’s many well-defined game trails, which greatly eased my side-hilling on the return. 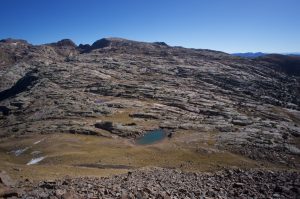 After crossing a false summit, I found a windbreak and register on the summit, added my name, and admired the glacier-planed slabs of Sheep Mountain’s southwest side. I contemplated the steep northeast side for a few minutes, then started down right, traversing back left on tussocks and faint goat paths. Though steep, the face proved much easier than it looked. Crossing the trail at the saddle, I began meandering toward Sheep, passing numerous streams and tarns as I tried to minimize the up-and-down. Though it looks a bit like a plain from above, the face is split by many crossing gullies, like Humphreys Basin in the Sierra, and progress toward the summit is tricky and frustrating. 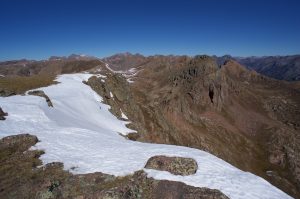 Not sure how much time and energy it would take to reach Organ, I aimed straight for the gap between Emerson and 13,085′, which looked from the topo to be the quickest route. Getting off the north side of Sheep involved some sketchy snow and dirt, but I didn’t cliff out, and soon found much easier terrain in the valley. Looking north from the saddle, I realized that this route would suck. Fortunately, the amazing game trail continued down east of the saddle south of Emerson, then contoured around. I took a sketchier high line on the way out, and found the correct, lower line on the way back. 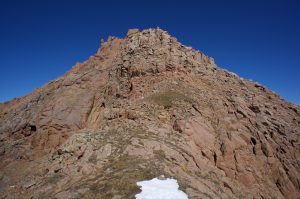 Amherst and Organ are classic Needles kitty-litter, a mixture of gravel slopes and decaying blobs. I made my way easily up the maze of Amherst’s south side, then found decent boot-skiing in the snow and gravel leading toward Organ. While Organ looks like an impenetrable collection of decaying pillars, there is an easy route on its east side, with a couple third class moves and a third class summit block.

I mostly followed the game trail on the way back, deviating to tag Emerson and 13,085′. I should have tagged 13,105′ while I was in the area, but I was eager to return and dreading my long road-walk. I cautiously cut the road switchbacks higher up, then picked up the well-established horse/use trail lower down, reaching my car after a bit over 12 hours. I drove down the nasty part of the road to get that out of the way, then made dinner and slept in a dispersed site off the smoother part of the road.

Needles from Pigeon to Echo

North side of Sheridan

Across Vallecito from Organ