Maidenform (and the Eclipse)

The total eclipse of August 21 was notable not just for crossing the whole contiguous United States, but also for the crossing several popular mountains, including Mount Jefferson, Mount Borah, and the Grand Teton. Jefferson was in the middle of a fire, and I suspected that any popular peak would be a zoo, as would the entire Wyoming side of the Tetons. Fortunately I have some obscure peaks on my to-do list, including Maidenform, reachable from a couple relatively obscure trailheads on the Idaho side of the range. This turned out to be a good choice — there were 40-50 cars at the North Leigh Creek trailhead, but I had my peak to myself for a once- or twice-in-a-lifetime event.

Dawn comes late on this side of the range, and I was coming from a timezone to the west, so I got an almost fatally late start a bit before 7:00 AM. There are two similar approaches to Maidenform, so for variety I took the Tin Cup trail to Granite Basin on the way out. I passed some cows and a group of dayhikers just above the trailhead, then a party camped on the trail at the pass over toward Granite Basin, hiking at a steady pace and feeling the altitude a bit after so long near sea level.

Granite Basin and the plateau north to Green Lakes remind me of the nicer parts of the Sierra, with granite slabs and boulders among grass and open woods, and plenty of lakes and tarns. I saw a few more campers in Granite Basin, then left humanity to head cross-country west to the ridge at the head of Leigh Canyon. When I finally got a look at the climb up Maidenform, it looked chossy and slow, and I was a bit worried about making it to the summit on time. I picked up the pace a bit, suffering up some fairly unpleasant class 2-3 choss, and made it to the summit a bit after 10:30, when the sun looked less than 25% occluded.

I had most of an hour to kill before the totality, so I alternately looked at the sun through my eclipse glasses, and experimented with trying to photograph it. I got some mediocre shots through the glasses using manual settings, though nothing spectacular with my wide-angle pancake lens. I tried taking some photos without the glasses, but even at over 90% occlusion, my lowest-light settings of f/22 and 1/4000 exposure were not good enough. I guess that demonstrates how it is a bad idea to watch a partial eclipse without proper glasses…

Maybe 5-10 minutes before totality, the light was noticeably dimmer than mid-day. Even before that, I could tell the eclipse was approaching by my camera’s settings on full auto: f/4 and 1/160 near mid-day, instead of a more normal f/4 and 1/2500 or so. I emerged from my sheltered spot just east of the summit, and prepared to try to capture the thing on video. Maidenform has a clear view of both the Idaho plains to the west, and the main Teton peaks to the south. I hoped to see a dark line approaching along the plains at over 1000 MPH, but the lingering forest fire smoke made that impossible, and it might not be visible even with clear air.

I got a couple of interesting videos, of the eclipse onset:

and of the eclipse end:


I tried to catch a still photo of the corona in between, as well as simply enjoying the brief period where I could stare at the sun without glasses. Those photos sucked, unfortunately. I notice that someone, in a particularly well-timed and baller move, had flown a jet around the Tetons right at totality: 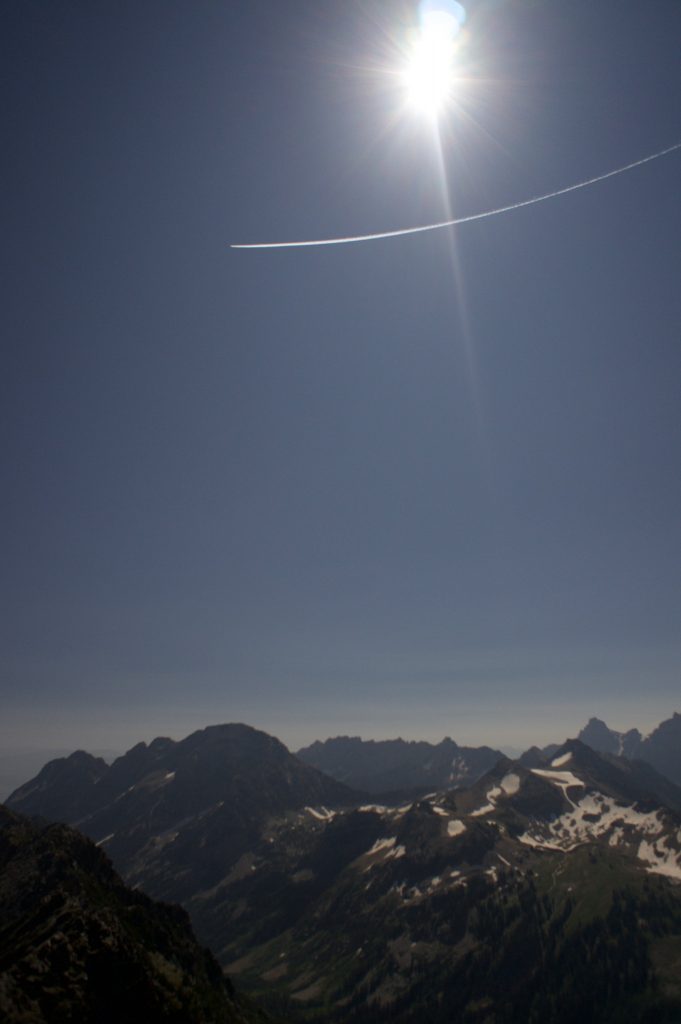 One thing I had not planned for is how much it would cool down during the eclipse. I had climbed in a t-shirt, and been fairly comfortable in an overshirt and windbreaker until totality, but my hands were aching by the time the sun returned, and it took awhile for the mostly-occluded sun to warm me back up afterward. It looks like temperatures dropped at least 5 degrees in Jackson, and may have cooled as much as 15 degrees on the peak. (Update: More on eclipse-related cooling.)

I had originally intended to tag Cleaver Peak as well, but by the time I had warmed back up, I lacked the energy to do the mile-plus brushy traverse. I returned to the plain above Granite Lakes instead, then took the Green Mountain trail back to the trailhead, meeting various eclipse-viewing parties instead. Since I had plenty of time, I enjoyed talking to a solo backpacker with his dog on the way down. The “crowd” was beginning to disperse as we reached the trailhead, but I decided to give things a bit more time to clear out. I washed up a bit in the creek, then found a quiet spot to camp for another night before heading back to civilization.

This entry was posted in Idaho, Tourism. Bookmark the permalink.

5 responses to “Maidenform (and the Eclipse)”