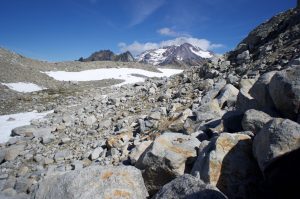 Glacier Peak is the most remote of Washington’s Pacific Rim volcanoes. I first climbed it in 2014, taking about 12 hours on a semi-casual outing, and found it to be one of the most scenic hikes in the Cascades. After about 5.5 miles passing through old-growth forest by the North Sauk River, the trail climbs to meet the PCT in alpine meadows near White Pass. From there, the route follows the Foam Creek trail (not on any maps) below White Peak, then leaves it to cross the ridge north before Point 7520’+. There are bits of climbers’ trail beyond the col, but since the talus plain is covered in snow for most of the summer, most of the long talus traverse is pathless. The summit, rising 1000′ or more above its neighbors in the center of the range, would have a great view on a clear day. 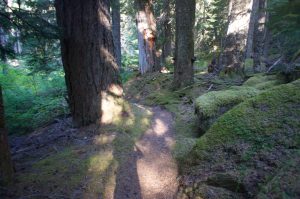 The FKT on Glacier, 7h58, was set by Doug McKeever back in 1998, using the now-abandoned White Chuck River trail to the Sitkum Glacier. The new standard route, via the North Sauk, is significantly longer, but I thought I had a chance to beat the venerable record. After a couple of easier days along the Mountain Loop, I settled in to sleep at the North Sauk trailhead. Sometime around 2:00 AM, I woke to the sound of a mouse in my car. Since I had not kept the mouse traps from the last time I had this problem (two years ago, also in the western Cascades), I lay awake until the mouse went to sleep around 5:00 AM, then got a couple more hours’ sleep before downing my beet-enhanced breakfast and hitting the trail at the ludicrous hour of 8:00 AM. 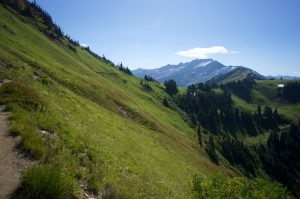 The mornings are surprisingly cool in the wet west-side valleys, so I was comfortable jogging the 5.5 miles to the cabin at the base of the climb, then hike-jogging the switchbacks to the PCT, reaching the junction in almost exactly two hours. I put on sunscreen, moved food to the front of my pack, then continued past a couple scruffy PCTers and a large cluster of mountaineers returning from Glacier with all sorts of heavy gear. The last of these, an attractive young woman putting on sunscreen at the pass, seemed concerned about my safety tagging Glacier with so little gear. She was not entirely convinced by my protests that I knew what I was doing, and skeptical of my fast-and-light evangelism. 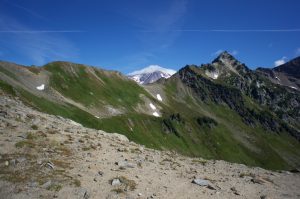 I continued mostly jogging along the Foam Creek trail, then left at a cairned junction to cross the ridge north, finally getting my first view of the peak. I was nonplussed to see the summit covered in a lenticular cloud, promising cold, wind, and no views. I had done the peak a month earlier in 2014, so the long snow traverse I remembered was mostly obnoxious moraine, barely runnable with extreme concentration. 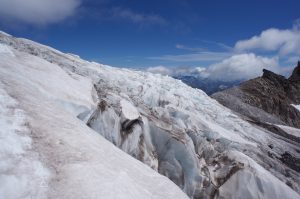 After some ups and downs around 6600′ below the much-diminished White Chuck Glacier, the route climbs to a popular camping site around 7200′, then over a minor ridge to finally reach the edge of the Gerdine Glacier. A well-worn track follows the lateral moraine to where it becomes nasty, then drops to the edge of the glacier. I followed the boot-pack left by the several recent parties, putting on crampons near the headwall where the snow is slightly steeper. I remembered the glacier climb as being mostly snow, with one easy crevasse to avoid, but found quite a bit of bare, broken ice on the saddle with the Cool Glacier, making me glad to have brought crampons. 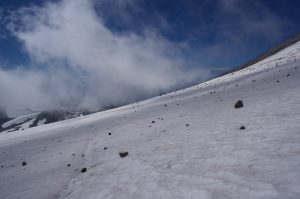 Continuing up the Cool, I jumped warily across one widening crevasse on the bootpack, then left my crampons near the summit ridge. It was slow going on the volcanic sand and loose boulders above, but I had no trouble avoiding snow on my way to the summit. I reached the top in almost exactly 5 hours, and spent about 30 seconds in the clouds before hurrying down to get out of the cold. I had both my overshirt and jacket on over shorts and a t-shirt, and was barely warm enough while moving. Also, while there was no way I could do the round trip in under 8 hours, I still wanted to put in a decent effort. 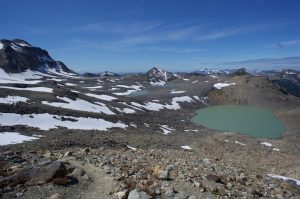 I jogged the upper glacier in crampons, then sat on a rock lower down to take them off and empty the volcanic sand from my shoes. I stopped again below the bivy site to refill my water at a stream and take off my overshirt, but otherwise maintained a steady effort on the return. It would have been hot if it had remained clear, but broken cloud-cover and a breeze kept temperatures comfortable as I descended back to the forest. I was slower than I probably should have been on the rolling downhill jog through the woods, but managed to reach the trailhead in a respectable 8h38. This is a runner’s course, so a better trail runner could probably do Glacier in under 8 hours.

I used the same setup for Glacier that I used for Olympus: running-shoe crampons and no ice axe. This is perfect for moderate-angle terrain that might include bare ice, as my crampons are light (600g) and compact enough to strap on my running pack. I thought about leaving the crampons at home, but am glad I did not, as it would have been difficult to work my way around the ice at the Gerdine-Cool glacier saddle, and incredibly sketchy to cross it in trail runners. Going crampon-free on Adams last year worked only because it is popular enough that other people put in stairs.

Sloan from near PCT

Sloan in the distance