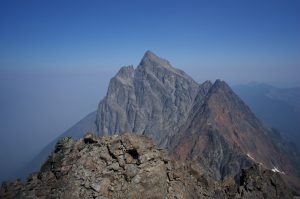 Hozomeen, Hozomeen, most beautiful mountain I ever seen. — Jack Kerouac 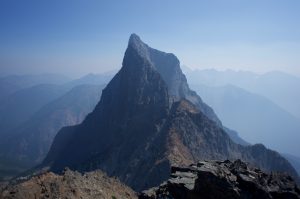 Welcome to the North Cascades. Have some choss and a face full of alders. — Hozomeen Mountain

Though not especially tall, Hozomeen’s sheer, isolated twin peaks draw the eye from many North Cascades summits. The peaks are normally reached from the north end of Ross Lake, at the end of a long Canadian dirt road. Since I was passing by on the Trans-Canada Highway, I decided this was my best chance to tag these hard-to-reach peaks. I had hoped to tag both the north (higher) and south (harder) summits, but thanks to some route-finding stupidity, I only climbed the north and lesser southwest peaks. Canada’s flagged climbers’ trails, and especially the Rogers Pass trail system, had made me complacent; Hozomeen reminded me that you need to bring your A game to the North Cascades. 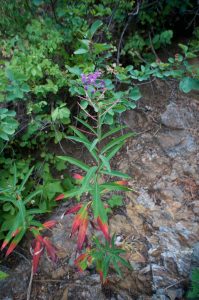 I found the dirt road to Ross Lake in surprisingly good condition, so it only took a bit over an hour to drive to the Hozomeen Lake trailhead, which has both water and nice free camping. I believe the normal route on Hozomeen these days goes up the border swath, but since I was thinking of doing both peaks, this route seemed to make more sense. I woke to horrible smoke, but started up anyways around 6:00, hiking a well-used trail to the lake. So far, so good. 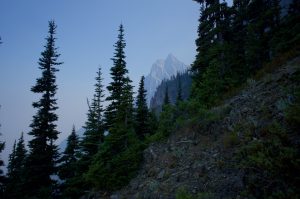 Beckey says to follow a trail around the east side of the lake to a prominent gully, but I found nothing, not even a fisherman’s trail. As expected, the ground near the lake is a miserable sea of deadfall and devil’s club, so I instead started climbing diagonally northeast, hoping to run into the obvious gully. I found a couple of smaller ravines, but no large, obvious gully, and between the vegetation and the smoke, I had no view of the peaks. It turns out that I should have followed the lake all the way around past its north end but, expecting a straightforward approach, I had not bothered to bring my map, and the guidebook’s aerial photos were not helpful. 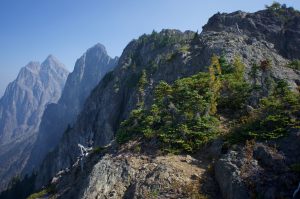 After quite a bit of brush-bashing, the trees finally thinned enough for me to figure out that I was well south of where I should be, on the southwest peak’s south ridge. I figured I might as well keep going, and eventually found a class 3-4 path up to the crest. The ridge was fairly pleasant, with fast travel along the crest mixed with short bits of class 3-4 climbing up some steps, and one short, unpleasantly rotten headwall below the summit. 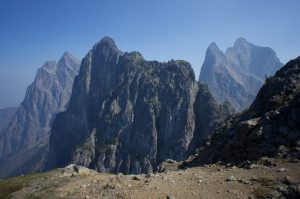 From my unexpected vantage point, I eyed the steep route on the south peak, then the long ridge to the north, and debated what to do. The south peak is a seldom-climbed Cascades prize, but the day had been longer and harder so far than I had anticipated, and it looked like there might be more difficulties getting to the north peak (and my best exit), so I decided to head directly to the north peak. I descended the horribly rotten ridge to the south-southwest saddle, then made a loose traverse on ledges to the ridge connecting the two main summits.

It turns out there is a reason that people don’t take this ridge. While never especially difficult, the climbing is loose and time-consuming, with several bumps to climb and descend along the way via often-rotten class 4-5.easy scrambling. I was tired but relieved to finally reach the base of Hozomeen’s southeast face, a straightforward third class scramble. Reaching the summit, I found a 1992 register showing only a couple parties a year visiting the peak, mostly via the border swath or northeast ridge. 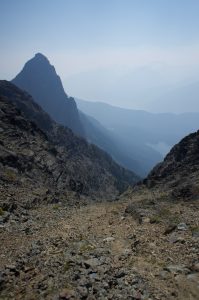 I returned to the base of the face, then started down Beckey’s “class 3” gully. It started out about the choss-fest one would expect from a gully filled with snow most of the year, and better than some I have seen. Lower down, however, I found some chockstones and wet steps that were definitely harder than class 3. I even found some remaining snow where I had to stem in the moat.

Beckey says to traverse to another gully farther south between 4000 and 4500 feet, but I was forced out of the main gully a bit higher, making a descending traverse through more- and less-pleasant woods. I did finally reach the other gully, somewhere below 4000 feet. It was blessedly free of vegetation, being filled with unstable talus, so it was faster than hopping blow-downs, but still slow. Where it flattens and becomes brushy near the lake, I angled out to the left, figuring I would hit the lakeshore. However, continuing the day’s theme of Doing It Wrong, I missed the lake entirely, finally following my GPS to bash through a swamp and pick up the trail below the Hozomeen Lake turnoff. What I had hoped would be the shorter of my two days out of this trailhead ended up being almost 12 hours. Ugh.