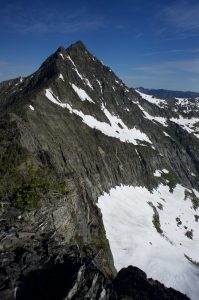 Ticking off “ultra-prominence” peaks is sort of silly, but it does lead me to ranges I would not normally visit. The Cabinet Mountains, in far northwest Montana, are not especially high, with generally poor rock and only one small glacier, so I would normally skip them. However, they are home to Snowshoe Peak, one of Montana’s four ultras, so I took the time to visit on my way to Canada, and was pleasantly surprised. The range reminded me a bit of the Cascades, with U-shaped glacial valleys, crappy rock, savage bush-whacking, and even a bit of devil’s club. It also feels much more “redneck” than other parts of the state I have visited. Snowshoe Peak, Mine, and Lake were all named by some miner who spent several frustrating hours nearby repairing his snowshoe. 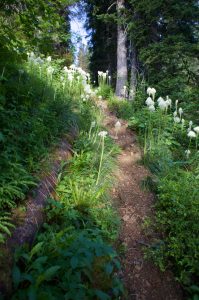 Driving to the trailhead in the endless evening light, I missed the Leigh Lake turnoff, found an unexpected gated inholding, and ended up at the Snowshoe Mine site. I could have driven back to find the correct trailhead, but I thought (incorrectly) that SummitPost listed a route starting where I was parked, and I was tired of driving. So I settled in and read a bit, then tried to sleep while it was still light out. 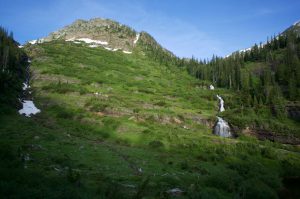 Expecting a short outing, I took my time in the morning, starting off around 6:30, which is really more like 5:30 or 6:00 this far west in the time zone. The Snowshoe Lake trail starts off promising enough, heading straight uphill along a pipe that was part of the old mine. Unfortunately, the trail peters out at the first lake, which is little more than a large mud-puddle. From there, a game trail with a few signs of human traffic heads north to a larger lake. I saw one of the white-tailed deer who maintain the trail as I wound through the brush. 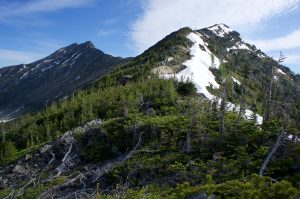 Any semblance of a trail ends in the bog near the upper lake. Embracing the suck, I continued north, eventually breaking out onto a plain of consolidated avalanche snow. Not sure of the best route, I climbed a steep chute west to a saddle, where I oriented myself and prepared for what looked like a long, frustrating traverse to Snowshoe. I followed goat trails through the krummholtz, finding a surprising cairn on 7718, and getting my first view of impressive Leigh Lake and its remaining icebergs. 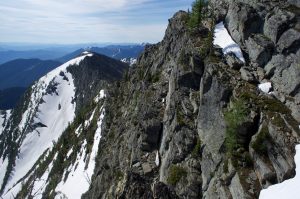 After descending to a saddle, things became more complicated. The uplift rock rises to the south or southeast, so the holds are favorable either along the ridge or to the right. However, this means that ledges tend to lose elevation; also, the crumbly towers frustrate attempts to stay on the crest. I ended up splitting my time between the crest and ledges to the right, occasionally doing some 4th class climbing to surmount towers or regain the ridge. It was mostly pleasant climbing on surprisingly good rock, and I couldn’t complain about the view of Leigh Lake cirque, but the constant fight against downward-sloping ledges got old. 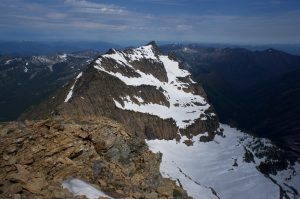 Where my ridge joined the standard Leigh Lake route the rock changed, and I found myself trying to follow goat paths through slightly-too-high cliff bands on the left side. After what felt like a few too many false summits, I finally reached the real one, where I was the first this year to sign the register. To the north, A Peak (yes, that’s its name) looked more impressive and just about as high; if I had not just suffered through so much ridge, I would have gone on to tag it. 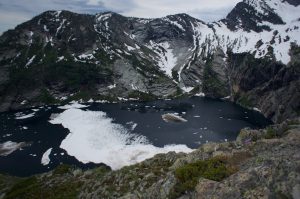 Retracing my route sounded miserable. There were a bunch of register entries mentioning the Leigh Lake route, so I decided to do that, then turn off my brain and hike/jog the road back to my car. After meandering back through the cliff bands, I found a cairn and a bit of trail, and started down the northeast ridge. The rock was not as good here, but the intermittent snow helped. I saw more cairns on the ridge, but lost whatever trail exists on the face, which was still mostly covered in snow. 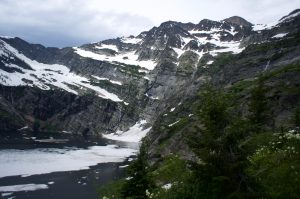 Crossing a stream down near the lake, I found what I hoped was the start of a robust use trail. However, it faded and I lost it again above the lake outlet, and suffered what felt like a lot of wretched bush-whacking through woody berries and downward-sloping, slippery grass. I clearly need to up my bushwhack game before I get to the Cascades. Just as I emerged onto the real trail near a well-developed campsite, I met a man out for a dayhike, who I greeted with a nonsensical remark about brush. The trail was not in great shape, but at least it was easy to follow, and I was soon back on the road, with nothing but some tedium between me and my car.

Things abruptly turned more redneck as I drove into Idaho, with a roadside quarry and a stack of rusting 1950s-era cars next to the road just past the border. Surprisingly, though, there is a nice trail up Scotchman Peak, reminiscent of the Washington “workout peaks” around Snoqualmie Pass. I had thought of doing this peak in the evening after Snowshoe, but I had had enough, so I saved it for the next morning. If you know roughly where to look, the trailhead is easy to find, with signs directing one to “Trail #65” from the forest road continuation of Main Street in Clark Fork. From the trailhead sign warning about mountain goats, a well-maintained trail climbs steadily to the summit, mostly in the woods.

Since I did this as a run, I did not carry a camera, but the views were partly obscured by clouds in any case. I managed about 3800 ft/hr on the meat of the climb, slower than I probably should be, but not far off expectations. The resident goats were waiting at the structure, and while they were clearly habituated, they were not aggressive, and moved out of the way for me to tag the summit and sign the register. As expected, there isn’t much Strava competition on this obscure peak, so I even nabbed the “record” on the descent, without taking the risks required to truly go fast.

7961 and Snowshoe from saddle

West to Ibex and Little Ibex

This entry was posted in Idaho, Montana. Bookmark the permalink.

One response to “Snowshoe; also Scotchman”