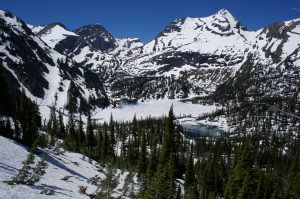 After some slow, unscheduled car maintenance in rural Idaho, I’m finally back on track… 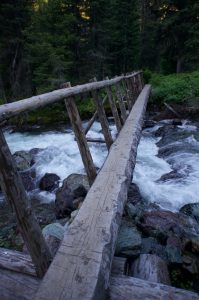 McDonald Peak, the highpoint of the Mission Range in northwest Montana, made its way onto my radar for being an ultra-prominence peak, one of only a few I have left to do. Nothing in Montana is really “on the way” to anything, but McDonald wasn’t too far out of the way to Canadia, so I added it to my itinerary. The peak can be approached from either side, and I chose the east to avoid dealing with Indian land. I haven’t spent much time in Montana, but I have enjoyed its wholesome atmosphere and well-kept public lands in the past, and this outing had a similar feel. 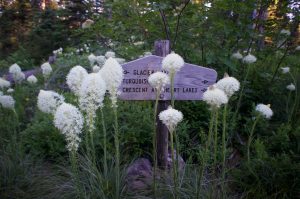 McDonald is closed from July 15 to September 30 to avoid harassing grizzly bears as they feed on moths on the summit. I tried not to think too much about where the bears might be now as I started up the trail around 6:00 with my headphones in and some probably-expired bear spray on my waist belt. I passed through some amazing fields of bear-grass, but they apparently don’t eat that, and I was soon at the end of the official trail at Heart Lake. 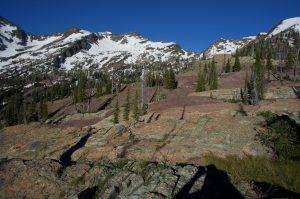 I barged through some people’s camp, then took what started out as a decent use trail. Not having a map of the area other than my road atlas, I didn’t know much about the route other than that I had to cross the ridge to the west, from which the peak would be obvious. As the use trail faded, I climbed northwest out of the trees, in what I realized on the return was the wrong direction. The scenery was nice, but the uplifted layers of limestone made for some obnoxious up-and-down. 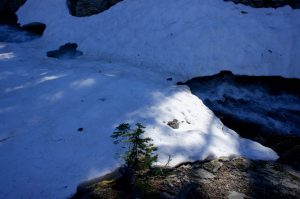 I reached the next side-ridge north, then took off for what looked like a manageable place to cross the ridge, realizing that I was probably off-course. At the crest, I saw I was a bit too far north, but fortunately the other side was wretched steep dirt and grass instead of a cliff, so I got down to the valley floor with only a bit of cursing. The majority of the basin was still covered in sun-cupped snow, but this worked in my favor, covering the bogs and brush, and providing a sketchy snow bridge over the main creek crossing. 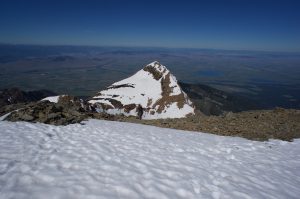 I think the “official” route goes all the way around the south side of the peak to the southwest face, but I took a more direct line up the southeast face on a mix of super-sticky limestone and snow (3-6″ of slurpee on top of harder stuff). I was hot and slow on the climb, but eventually reached the south ridge without using my crampons, and summited about 5h30 from the trailhead. There was still too much snow to see the extent of the glacier to the north, but I had fine views of the peaks to the south, and of West McDonald towering over the valley to the west. Far to the northeast I could make out the higher peaks of Glacier National Park and, possibly, Waterton up in Canada. 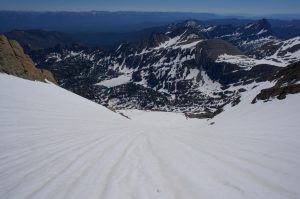 The return went much more smoothly, starting with a fairly epic boot-ski back down the southeast face. I broke through a snow bridge once, but had enough momentum to face-plant on the downhill side almost before my feet touched the stream. Fortunately the snowpack up here is not like Colorado in May, so I had almost no postholing on my way back to the even-sketchier snow bridge. The correct ridge crossing had been obvious from the summit, and I even found the use trail in a dry patch near the top.

After more glissading down nearly to Island Lake, I picked up a faint use trail around the north side, then left it to drop down some slabs northeast toward Heart Lake. I’m not sure what the best line would be through here, but after some thrashing, I found the continuation of the use trail around Heart’s west and north sides, eventually reaching the top of the official trail. I hiked a bit, then jogged out of impatience, reaching the car a bit under 9 hours after leaving. On to the next.

Bear grass is going off

More of the stuff