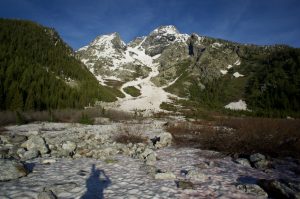 Base of the snow

Mount Moran rises 6000′ directly from Jackson Lake, and the Skillet Glacier and its snowfield cover most of the slope, offering up to 5000′ of continuous snow well into June. Unlike on my previous outing, snow conditions were wretched — loose and slushy up high, dirty and sun-cupped down low — but it is an iconic line, and I was glad to tick it off the list. The whole thing took 10 hours car-to-car, including 3-4 hours trail hiking, 3.5 hours boot-packing, 25 minutes skiing, and some time fighting brush with skis on my back. 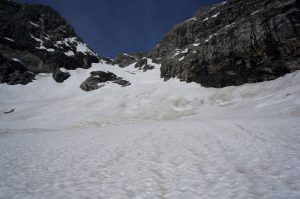 Climb from the pan

I woke at the stupid hour of 3:15, made myself a hot Cup of Sadness, and drank it on the drive up to String Lake. I started hiking by headlamp at 4:00, stashing the light at 5:00 near the north end of Leigh Lake. The commute to Bearpaw Bay normally takes me about an hour, but the skis on my back limited me to a fast walk. I had no trouble following the use trail to where it crosses the Skillet’s outlet stream, but foolishly decided to ascend the south side instead of crossing. After most of a frustrating hour of deadfall, pines, brush, and aspens, I finally emerged at the foot of the snow. 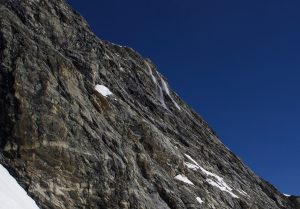 I tried skinning a bit, but soon lost traction on the hard, sun-cupped snow, and put my skis on my pack to boot the rest of the way. Someone had installed a boot-pack in the prior few days, saving me a bit of energy, but the Skillet is still an interminable climb. It was also intolerably hot. The Skillet is not just east-facing, but also sheltered from wind by ridges on both sides, so I was dripping sweat in a t-shirt nearly the whole way up. The snow also softened alarmingly fast, and I was treated to regular wet sloughs coming down the skillet handle’s central runnel, and even small projectile avalanches off the ridge to the north. 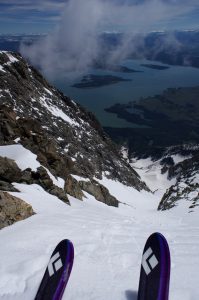 Time to drop in

Much wallowing later, I emerged on the summit ridge, where I dropped my pack to tag the summit, then put on my skis for the descent. The first few hundred yards are steep and narrow, but the slope quickly opens up. However, every turn kicked off a small wet slide, so I had to make a few turns, then traverse to one side to allow them to pass. I stayed left to the base of the handle, sending my sloughs into the convenient runnel, then crossed it to get around the bergschrund on steeper snow on the far right.

From the pan onward, I was out of sloughing territory, but skiing over sun-cups and around small rocks was still tiring, and my legs were shot from the hike up, so I still had to stop frequently. After taking off my skis, I easily found the faint trail on the valley’s north side, and only lost it a couple of times on the descent to the creek. From there, it was just a hot, thirsty walk to the car. Passing the tourists along Leigh Lake with their boats and swimsuits, I felt out of place and a bit foolish with skis on my back.

Base of the snow

Climb from the pan

Time to drop in

I caused some of that