I had done only cross-country skiing for over four years, but I needed to get out and try some new-to-me AT skis. With a decent forecast and a more experienced skier (Jack) around, I decided to remember how to turn by skiing the Middle Teton Glacier. This was perhaps not the best terrain on which to remember and practice, but my fun-to-fear ratio was at least as high as on a typical mountain bike ride. 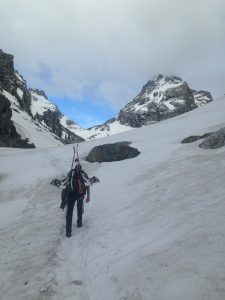 In previous years, I have laughed at the people toting skis up into Garnet Canyon in mid-June, but today I found myself one of them, leaving the Ranch at 5:00 with skis and boots strapped to my pack in an awkward A-frame. This meant not only that I was taller and wider than usual, but that I had to stride carefully to avoid bashing my calves against the skis’ tails. Fortunately the trail up to Garnet is relatively wide and smooth, so I made it to the snow without getting caught on too many obstacles. However, I quickly felt the unaccustomed weight of the tool-shed on my back. 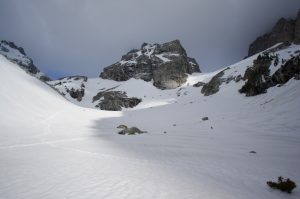 Once on solid snow at the boulder-field, Jack and I put on skis and skinned up through the meadows toward the winter route to the Lower Saddle. I much preferred having the extra weight on my feet instead of on my back, and didn’t mind the unavoidably slow pace. Someone had installed a convenient boot-pack the day before, so we could turn off our brains and plod on the climb to the moraine. 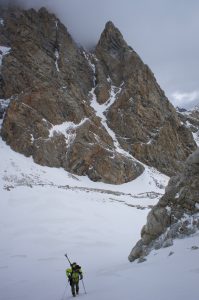 The boot-pack disappeared a bit below the glacier, and I began installing my own through the upper moraine and up the glacier. The snowpack was about what I had expected — 6-8″ powder over a rock-hard crust — but the powder was heavy and, perhaps thanks to the cloud cover, not yet prone to slide. The route up the glacier was a careful slog, meandering slightly to find snow deep enough to kick supportive steps without unnecessary wallowing. 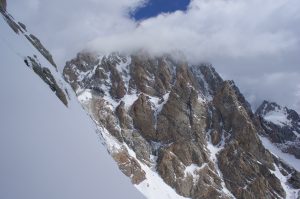 We took a break where the glacier turns west, then continued up steeper and more tiring terrain to the col between Dike Pinnacle and the Middle Teton. The sun came out near the col, revealing an impressive view of the Nez Perce to South Teton ridge to one side, and occasional glimpses of the Grand to the other. A helicopter which had ferried two loads of people to the Lower Saddle returned twice hauling supplies while we took pictures and switched to downhill mode. 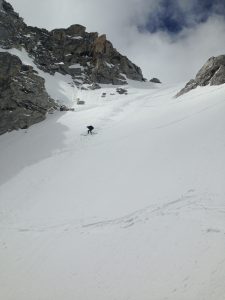 The upper glacier was definitely not a beginner run. Jack made it look doable, though not easy, making a series of traverses and jump-turns toward the bend. I was shamefully unmanned, making a turn or two and side-slipping most of the top part. Skiing is all about one’s confidence, and when faced with a rock wall on one side, a snow runnel on the other, and a small crevasse below, I found mine lacking. Below, however, I was in my comfort zone, linking turns down the broad glacier and snow-slope to the moraine. 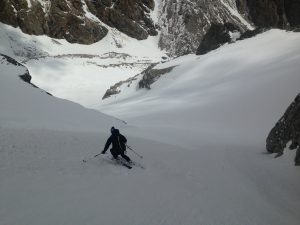 The snow below had softened alarmingly quickly in the sun, so our skis began to stick as we cruised across the flat and down the headwall to the Meadows. We took our skis off at one point in the boulder-field, then put them back on to glide a bit more and minimize the miles spent carrying them on our backs. I never enjoy the descent to the Ranch unless running, and it was far worse carrying skis. I resolved to avoid Burnt Wagon Gulch and Garnet Canyon for the rest of my visit.

My thanks to long-time (and sole) sponsor Scott, who provided the AT gear that made this possible. I doubt I will ever get into “extreme” skiing or randonée racing, but the new tools will give me more freedom in the hills. Plus, skiing is fun.

This entry was posted in Skiing. Bookmark the permalink.