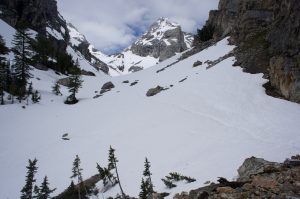 After bluebird skies and 80s in the valley for Work Week, the weather turned hostile, with rain in the valley and snow down below 9000′ on the peaks. With Sunday having the least-bad forecast for a few days, I decided to get out and try something in the hills instead of going insane in the Jackson library. I was somewhat at a loss for a suitable outing until Tim suggested the Chouinard Ridge on Middle Teton, a broken, south-facing 5.4 route. I had done nothing on that part of the mountain, so it would be somewhat new, and the rock would be mostly dry if the weather behaved itself. 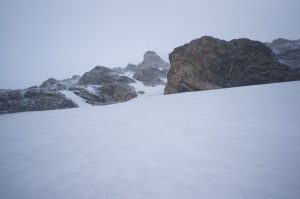 I put crampons and boots in my big pack and left the ranch in running shoes around 5:15, ignoring the clouds. Temperatures remained moderate as I climbed into Garnet Canyon, and I wore just a t-shirt until I stopped in the Meadows to switch to boots next to the army encampment. As I continued up the south fork, a combination of clouds and snow left me seeing very little, and considering other route options. Fortunately the clouds were patchy, so I managed to find my intended route without much difficulty. 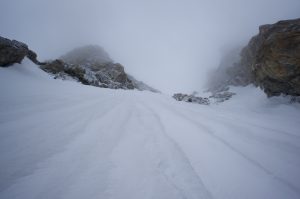 Seeing that the rocks were covered in icicles and a dusting of fresh snow, I decided that it might be wise to choose another route. The neighboring Ellingwood Couloir seemed perfect: it appeared to have already slid and consolidated, and the cloudcover was keeping the snow well-frozen. I put on my crampons, took out my one ice tool, and got to work. 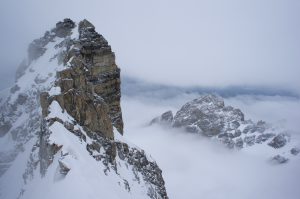 The couloir starts out flat enough to French-step, but soon becomes steep enough to require front-pointing. The old snow had formed multiple runnels, into which the fresh powder had drifted several inches deep. The old surface was mostly névé: perfect for daggering a tool, but requiring several kicks to create a step to rest my burning calves. Partway up, I looked back to see two people descending the south fork, and wondered what they had done to be coming down so early. 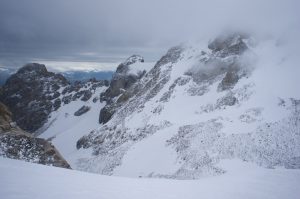 Though I was fairly certain I was in the correct couloir, it was still a relief to climb around the cornice and find myself looking at the familiar view of Dike Pinnacle and the Middle Teton Glacier. I also found myself between cloud layers, able to see between them and through the saddle between Nez Perce and Cloudveil Dome all the way to Jackson Peak and the Gros Ventres. I could have descended the glacier, but the day was young, and it seemed lame not to summit. 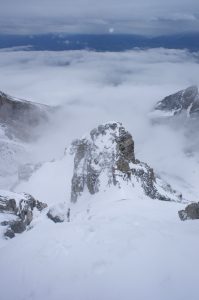 The final climb up the east side of Middle Teton can be a bit dicey, with snow falling away from slabs as spring turns to summer. After traversing right on snow under some rocks, I followed a runnel to the notch between the two summits on a messy mixture of snow types. A bit of clumsy mixed climbing got me out of the notch and onto the easy snowfield leading to the summit.

There wasn’t much to see, so I hardly paused before heading down the standard southwest couloir, where I passed 5-6 army guys belaying each other down. Unfortunately it was still cloudy, so the snow had not softened up enough to allow much plunge-stepping or boot-skiing. Back at the Meadows, I switched back into trail runners and talked to Eric, the Army instructor with whom I had climbed the previous summer. Then it was a tedious but sunny walk back to the Ranch, to eat glop on tortillas and catch up on my neglected chores.

Teewinot and Disappointment from near summit

Ridge and couloir on descent

What a beautiful day…