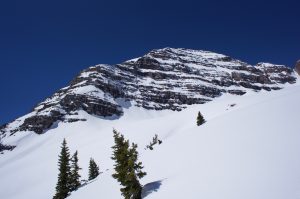 I had intended to do this the day before, but the weather was not cooperative. More significantly, I found a dead man. With ominous clouds overhead, I was the first person on the trail south toward Maroon Peak around 5:00. The tourists had beaten in a good path to Crater Lake the day before, but things were somewhat more confused beyond there, as several paths made their way through the willows. Re-emerging from the woods in the open area south of the lake, I saw a man lying on his back on the snow near the trail and creek. At first I thought he was some weird stoner meditating at 6:00 AM, but he seemed unnaturally still. Getting closer, I saw that he had tied a stick to one leg, there was blood and frost on his face, and one shoe was missing. He was dressed for a dayhike, with a low-top shoes and just an overshirt. I have no idea where or when he fell (I came down the same trail a bit before 5:00 PM the day before and saw nothing), but he seemed to have frozen overnight, perhaps after falling into the creek.

If this were Everest, I would just keep going, but the rules of civilization apply in the Bells, so I turned around to contact someone. I warned the few backpackers I passed on the way back, then had to drive all the way into Aspen to get a cell signal. (For future reference, the ranger camped in the overnight lot has a satellite phone.) It was raining in town by the time I explained the location to the mountain rescue people, and I didn’t feel much like climbing anyways, so I headed up to Basalt to wile away the day. 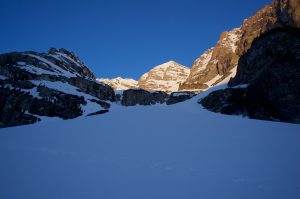 Looking up from apron

Back down on the Maroon Creek Road that evening, I got rousted from the overnight lot and found a semi-legal camping spot in the lowest campground (the ones above were full) for some mediocre sleep. The next morning, I was up and at the day use lot just before 5:00. There were already a dozen cars there, mostly people photographing the Bells and Maroon Lake, currently home to some Canada geese. I started off with two men from Carbondale who were headed for the standard route on North Maroon; I silently questioned their choice, but said nothing.

I left them when they stopped to shed a layer, continuing to the base of the Bell Cord, where I met a group of three skiers (Logan and two others whose names I missed) planning to ski the couloir. I am a bit slow now, and they were shockingly fast, keeping up with me on skins as I booted up the apron toward the first cliff band. Here they had to transition to crampons, though, and I stayed ahead for the rest of the day. 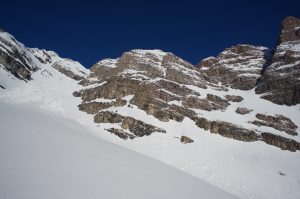 Bell Cord and Y to the right

As is often the case, the couloirs are not at all obvious from below. After passing through a break in the cliff band, South Maroon’s east face looks like it could be the Bell Cord. However, you actually need to traverse right, at which point the true Bell Cord becomes obvious. Fortunately I remembered the views from the Pyramid Traverse, and the angle at which the couloir should be visible. Several inches of fresh snow had fallen at this elevation, so I meandered back and forth some as I made my way up to the split between the Bell Cord, which leads to the saddle near South Maroon, and the Y, which leads to a point just below North Maroon’s summit. 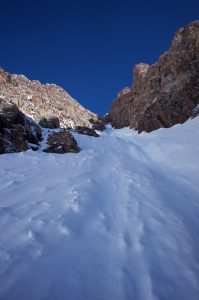 Up from base of Y

I was glad that the Y, much narrower and somewhat steeper than the Bell Cord, was still in the shade, as the day was already becoming uncomfortably hot on the east-facing slope. Normally I would climb the deep runnel in the couloir’s center, but 4-6″ of fresh snow had collected there, so I stayed mostly on one side or the other. The underlying snow was pleasantly crunchy, perfect for cramponing and daggering my axe. Had it been much steeper or icier, I would have wanted a second tool, but fortunately there were only a couple of short stretches steep and hard enough to merit an actual swing. The views across the Bells’ east face were impressively steep, with icicles hanging off overhangs in the stepped, rotten rock. 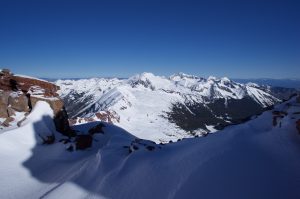 Snowmass and Capitol from ridge

Topping out, I got an impressive view of Snowmass and Capitol to the west, and saw that North Maroon’s summit was only a short distance away. The route stayed on the shaded west side of the ridge, where the snow was unpleasantly sugary until near the summit. With a couple 4th class moves and a bit of step-kicking, I reached the summit snow ridge, which I had to myself. 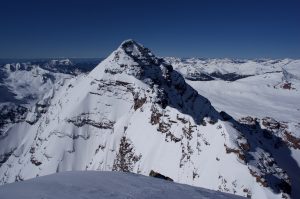 I looked at the traverse to South Maroon, which I had planned to do, but despite the perfect weather, I found no enthusiasm for wallowing through sugar on the shady side of the ridge. After snacking and vacillating, I started down the northeast ridge, expecting to run into my companions from the morning. I soon realized why they were so far behind: the face was covered in 6″ of heavy powder, fine for descending, but a misery to climb. 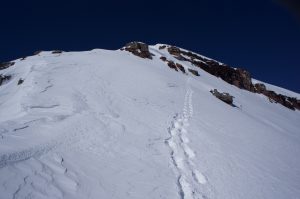 As the ridge started to become unpleasant, I looked west and saw some people booting up lower on the other side of the north face. They had made it that far, and hopefully knew what they were doing, so I began a long traverse toward them on a snow bench. The entire north face is a maze of small cliff bands, and I recognized nothing from when I descended it in summer 2010. After a couple short backtracks, I made it within hailing distance of the first climber, a skier stymied by the small cliff band between us. After a false start, I managed to stem down a short corner to the snow apron below, relying on snow and rock instead of the warming, rotten ice.

I finally met my companions from the morning below the cliff band. They were having a long day, being defeated by a line directly up the face before retreating to follow the skier’s path. I downclimbed and glissaded to the base of the face, then stripped down to a t-shirt for the toasty hike back to the parking lot. There were a few dozen people at Crater Lake, which had a thick enough skim of wet ice to bowl snowballs well toward the other side. After that diversion, I passed through an endless horde on my way to the trailhead.

There were cars circling the lot waiting to park, but I took my time cooking lunch, washed my dishes, talked to the skiers I had met that morning, then escaped the craziness. There were probably a hundred cars lined up at the entry station, with their bored passengers wandering up and down the road and wandering obliviously into the downhill lane. Ugh. As I read somewhere recently, “I went to the mountains to find solitude. Then I came to Colorado.”

Looking up from apron

Bell Cord and Y to the right

Traversing to base of couloir

Up from base of Y

Down near base of Y

Snowmass and Capitol from ridge

Down Y from top