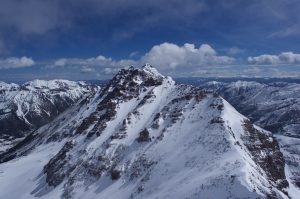 I was tired of getting spanked by Front Range weather, so I looked around for some more agreeable weather, and saw that western Colorado was at least passable. This would involve some backtracking, but would not be that far out of the way. “Thunder Pyramid,” a high 13er south of Pyramid Peak near Aspen, was one of my few remaining Centennial peaks. I had hoped to tag it when I did Cathedral, but the (dry) road was gated an infuriating 6+ miles from the normal trailhead, and I lacked the will. With the road now open, Thunder Pyramid would be almost too easy, so I upped the difficulty by climbing it as part of a long traverse from an unnamed 13er to Pyramid. 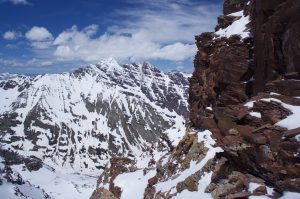 With snow, this turned out to be Serious Business, taking nearly 12 hours car-to-car with quite a bit of that spent managing rotten snow and rock above 13,000′. It was good Canadian Rockies practice: the rock around Aspen is similar to what I found up there in 2014, rotten and surprisingly steep, with angled layering that makes one face easier to climb than the other. I have climbed chossier rock, but this was some of the worst rock in the area, significantly more rotten than the Bells. 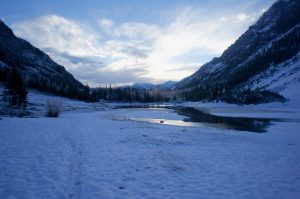 I had planned to get up at 4:30, but it sounded like it might be raining a bit, so I was up at 5:00 and off by 5:30. Given the conditions, I chose to do this the heavy way, with boots, crampons (unused), ice axe, and snowshoes. There were a couple sets of helpful bootprints to follow on the West Maroon trail, which was snow-packed and obscure before the holiday weekend. After bashing through some willows, I saw the print-makers working their way up the Bell Cord couloir between the Maroon Bells. I continued a short distance past their starting point, then crossed the creek on a snow bridge to make my way east into Len Shoemaker Basin. 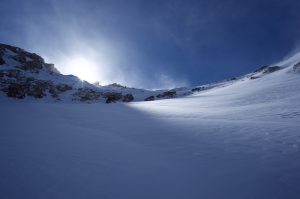 The snow remained supportive yet soft enough to kick steps as I made my way straight up the basin’s outflow, and I was regretting bringing the snowshoes. However, as soon as the basin flattened, I started postholing, and gratefully put on my snowshoes to hike the flats toward the saddle north of Peak 13,631′. I finally got my first taste of sun just below the saddle, where I put the snowshoes away for the day and made my way south — away from my main objective — to tag this nothing-peak. Though I had been watching spindrift off the surrounding peaks all morning, the fresh snow made it look windier than it actually was, and conditions were pleasant on the ridge all day. 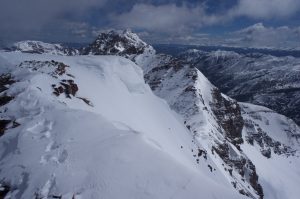 I was instantly made aware that the day would involve considerable suffering, as the ridge to 13,631′ was crust over sugar over movable Elk Range choss. Cursing ensued. It also featured some impressive cornices, which I gave a wide berth. I found a couple of awkward rock steps, which would probably have been easier when dry, but met no serious difficulties on the way to the summit. I briefly took in the view, then began the traverse in earnest, over 4 hours after leaving the car. 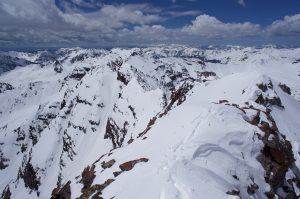 I returned to the saddle, then began the traverse with some easy but frustrating postholing toward the first of many bumps on the ridge. The traverse from 13,631′ to Pyramid took about 4.5 hours, and I was focused too much on immediate problems to give a detailed account. The detailed route description I linked above describes one 5.2 headwall and lots of 4th class scrambling, but I found quite a few sections of what felt like 5th class. This was probably because the snow obscured some ledge bypasses, forcing me along the ridge crest more than when the route is dry. Also, later in the day the east side, which had been baking in the sun all morning, was quite prone to wet avalanches, making it largely unusable. 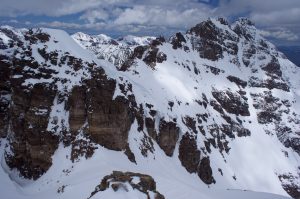 I surmounted the first notable headwall before “Lightning Pyramid” via a sort of chimney just west of the ridge crest, then continued along a snow crest. In general, I found it best to leave the ridge to the west, as the joints are more favorable for climbing on that side. I had hoped to take advantage of the snow to traverse the east side, but by noon or so it had become slushy and prone to avalanche. Making my way along the crest, I kicked off a couple of small wet slabs that expanded to full-on wet avalanches as they made their way well down the face. Dealing with the ridge crest was often the best course, despite multiple small bumps and intermittent cornices. At one point I even did a small section of narrow snow crest à cheval, an unusual thing to do. 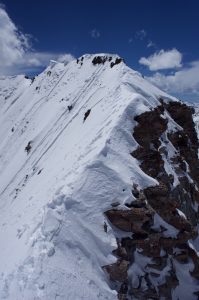 While Pyramid looks close from Thunder Pyramid, the final leg of the traverse seems interminable, with multiple steep subpeaks along the way and few opportunities to bypass them. I finally intersected the semi-standard northwest ridge route just below a 4th class chimney, and followed it to the summit. The current standard route, the northeast ridge, looked way too avalanche-y to try, so I retraced my steps a bit to follow the northwest ridge. 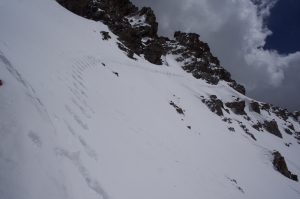 I had done this route in 2010, but did not recognize it with snow. I started down via a steep, descending snow traverse that is probably a ledge in summer, following the occasional cairn. Judging by the cairns I saw, the route follows a series of gullies on and off the northwest ridge. I dutifully did so as well, then headed straight down as soon as I reached a gully that I could see did not cliff out. After some obnoxious knee-deep plunge-stepping, I glissaded part, scrambled around a constriction, then reached the stream at the valley bottom via a combination of hiking, glissades, and boot-skiing.

I rejoined the trail south of the Bell Cord couloir, then stomped through slush back to the car. It was the Friday before a holiday weekend, and the once-faint trail had been beaten to a slushy trench by the tourist hordes. Reaching the car around 5:30, I had some food and debated going into town. However, I wanted to climb an east-facing couloir the next day, which meant waking up extra-early, so I watched some downloaded TV and tried to go to sleep by 9:00 instead.

Bells and shadow of ridge

Bells with Snowmass and Capitol behind