Why I am a summer “mountaineer” 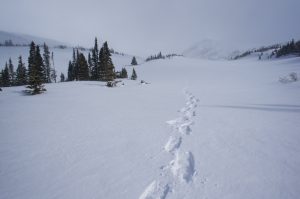 Ain’t nobody got time for that

After a resupply and some maintenance, including an oil change by a possible neo-Nazi, I looked around and realized I was relatively close to Mount Bancroft. I had put its east ridge, a class 4-5 affair supposedly best with some snow, but it seemed like a perfect objective for a day forecast to be “mostly sunny with a 20% chance of snow.” So I drove up to the first of two locked gates and watched some saved up TV as it started snowing. There was an inch or so on the ground by the time I went to sleep, and about 2 when I woke up: not great, but still manageable.

I clomped up the road with boots, snowshoes, crampons, and axe, eyeing the partly-cloudy skies. Below Loch Lomond (a man-made reservoir, not a lake), the snow got punchy enough for snowshoes, and the wind picked up enough for goggles. The wind picked up as I continued past the dam and up the slope to the west, adding spindrift to complement the persistent clouds. It wasn’t particularly cold, and I could see the headwall at the base at the ridge, so I knew where to start. But my chances of success seemed low given the fresh snow and lack of visibility. Screw that.

I had plenty of day left after getting back to the car, so I headed up to Boulder to do some laps in the Flatirons. Boulder is even more obnoxious than I remember, and I had to park well down the street from Chautauqua Park, but carrying only rock shoes, water, and snacks, I didn’t mind the extra walk. Boulder is also home to a university, so I got to inhale the pheromones of beautiful people half my age as I hiked and jogged around.

Flatirons climbing is unlike anything I have done recently: the rock is very sticky with few cracks, so climbing it relies on dishes, crystals, and thin edges. This sort of slabby climbing is unnerving until you get your mind in the right place, since no single appendage will hold you if something goes wrong. I hadn’t done this style of climbing in awhile, so I warmed up on the easy 2nd Flatiron. I tried to do Dodge Block, but couldn’t find the upper part of the route, so I finished on something else to the right. Next, I headed over to the significantly harder 1st. Starting up was a bit scary, especially since the hardest part is near the start. I had the hang of it by the time I got to the top, and knew I had to return for another lap.

To break up the repetition, I headed out to Royal Arch. I hadn’t climbed on top of that, so I did it from the downhill side, which I found pretty easy. Then it was back to the 1st for another go. This time went much smoother, though I took a slightly different line. I passed a party I had seen on my first lap near the top, then repeated the awkward downclimb off the back. This is completely different than the face, following several downward-sloping ledges covered with jugs on a near-vertical face. It feels secure if you take your time, but I’m still slow at it.

Sometimes I wonder why I subject myself to winter.