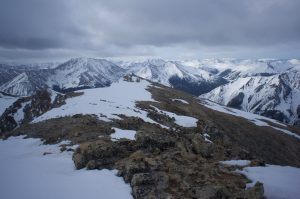 “Lackawanna” is a nondescript, unofficially-named centennial peak in the Mount Elbert area, just south of the road to Independence Pass. Unlike Oklahoma, which involves a long slog, Lackawanna is a quick couloir climb from the road. Its name, a Ute word for indifference or a shortage of enthusiasm, was bestowed by Chief Ouray when he passed through the area with a raiding party, and one of his braves dared him to climb the peak. He looked at the unexceptional hill surrounded by higher neighbors, then rode on, muttering “meh, lack a’ wanna.” 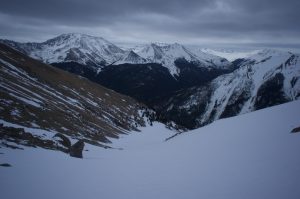 I woke up a bit before 6:00 in a pullout west of the La Plata trailhead, and started off across the road around 6:30. It is hard to get a good view of the mountains from the road, so I somewhat randomly bushwhacked to the base of what turned out to be the couloir east of the correct one. It worked out fine, but for future reference, the correct “Lackawanna Couloir” is the one you can see from the road where the valley broadens and flattens in a willow-choked flat. 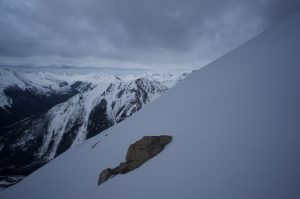 After an easy climb through open woods, I cramponed up a bit of snow, then hopped up some boulders to reach the continuous snow tongue leading to the summit ridge. The snow was pleasantly firm, and I had almost no postholing trouble as I cramponed up into a bowl, then up what turned out to be Lackawanna’s southeast face. The final climb was steep enough that I was glad to have an axe to supplement my worn-down running shoe crampons. 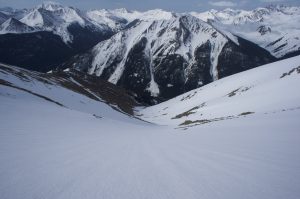 Topping out, I figured out the wrong-couloir situation, then made a quick jaunt to the summit before descending the correct chute. The initial drop was steep, and the snow was still very hard, so it was a bit of a desperate effort in my worn-out crampons, downclimbing with several kicks for each step. Once the angle eased a bit, I was able to walk down facing outward, and even began postholing occasionally lower down. Though I did not see any wildlife, I saw mountain goat tracks and spoor surprisingly low down.

At the base of the snow, I turned into the woods east of the couloir instead of bashing through the willows. For some reason, the woods here were much less pleasant than those I encountered on the way up, with more deadfall and underbrush, but the road was not too far, and I reached the car by late morning. After a random meal, I headed down to Buena Vista for a shower. The shower was dirtier than I remembered, and despite the “very hot water!” warning signs, the actual water was never warmer than not-freezing, but I managed to make myself a bit cleaner for $2, and I was on the road again before noon.

I hoped to tag Buckskin Mountain, a formless mound across from Democrat, but the weather deteriorated rapidly. I gamely headed out anyways, only to turn around when the lighting started — Buckskin just wasn’t worth risking electrocution. This turned out to be a fortunate choice, as I happened to meet a random Canadian with whom I had interacted online on the way back. It’s a small world of people who get out into the hills in the awkward season.

Oklahoma and Massive from Lackawanna