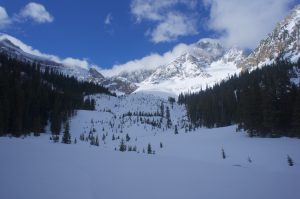 After a stupid mistake resulting in an unintended day off, I headed around through Ridgway to the north side of Mount Sneffels. I had already done it via the standard summer route, but that was in the pre-dirtbag days, so I didn’t mind visiting again to try a route on the north side, the Snake Couloir. Couloir season doesn’t really start until later this month, so I was expecting difficult conditions, though not quite as bad what I encountered. At least I didn’t get avalanched. 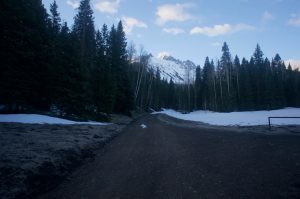 The road was blocked by a snowdrift about a mile from the normal trailhead, so I slept on the side of the road there, then got started around 6:20. There was nearly solid snow-cover from the trailhead on, though it was hard enough lower down not to require snowshoes. The trail to Blaine Basin starts as an old road, making it initially easy to follow. I guessed correctly by turning left at an unsigned fork, and soon crossed a creek to join a little-used jeep approach. From there, the trail narrows to a single lane, but it is fortunately well-signed, and has nowhere to go other than upstream. 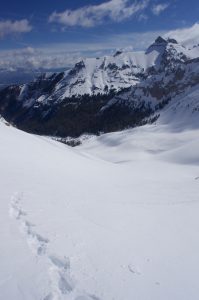 The flagging eventually gave out at a signed trail junction, so I took the most direct reasonable path through a headwall. I somehow rejoined the trail, and followed the occasional sawed logs as it side-hilled up into the basin and out of the trees. Finally, the path to Sneffels was clear. The crust was not quite strong enough to support me, so I made my laborious way up toward the base of the couloir, punching through ankle-deep with each step. Fortunately it remained partly cloudy, so it was not too hot, and the snow both stayed solid and did not slide. 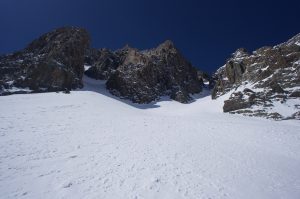 I put away my snowshoes where the couloir began to steepen, assuming I could kick steps from there. Unfortunately the sun had emerged by then, softening the initial northeast-facing section, so after some wallowing, I put snowshoes back on and switchbacked carefully to a choke-point. There the snow remained in the shade, and I was able to boot toward where the couloir turns left. 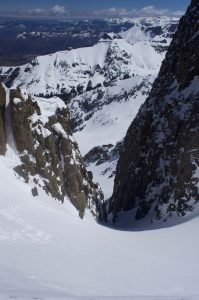 I reemerged into the sun, and was once more forced to wallow. I wasn’t sure what would happen if I fell here, but didn’t want to find out; it was steep enough that snowshoes were not an option. With some trial-and-error I managed to make my way on top of a cornice at the turn, from which I could admire the view west and scope out the rest of the climb. 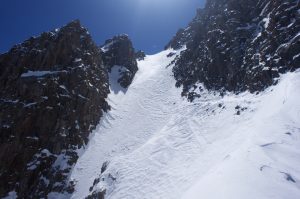 The last-bad way to climb this last part seemed to be to stay on the right side of the couloir. I hoped to make use of the rocks there, but they were all rotten and/or outward sloping. In normal couloir season, you simply follow the center of the couloir to a ridge, then climb a short pitch of low-5th-class rock to the summit. However, frustrated by the soft snow, I ended up cutting right too early, then climbing some scrappy rock on the summit’s northwest side. 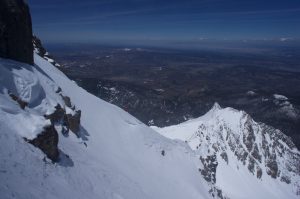 Reaching the summit, I was surprised to see a rappel in progress, with what I correctly guessed were skier(s) futzing around preparing to ski what I had just climbed, which sounded like much more fun. I enjoyed the views from the sunny and relatively calm summit, then made my way down the skiers’ boot track, hailing them across the way before they started down.

Where the standard route turns right into Yankee Boy Basin, I turned left toward Blaine, taking advantage of a few glissades to catch the skiers as they took a break and transitioned to skin up the way I had descended. I rejoined my tracks from the morning partway down to the basin, then followed them for the slog back to the car for a fairly tough 9-hour day.