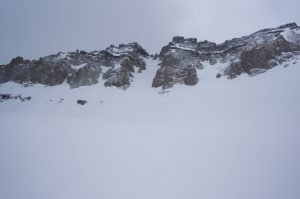 And so it begins. The start of my season coincided with the largest snowstorm of the year, dumping 6 inches in town and around 2 feet up at the ski hill. This complicated the move-out process somewhat, but it also gave me one final chance to go backcountry sledding before throwing the rest of my belongings in the car and heading north. Since the recent storm had apparently dumped much more snow on the eastern Colorado mountains, I decided to start with a few random peaks in the Ouray area. 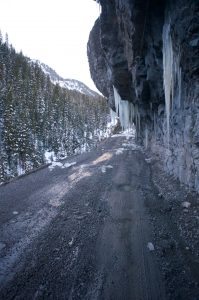 Gilpin is a 13er directly across Yankee Boy Basin from Mount Sneffels, with a prominent couloir on its north side. This made it somewhat more interesting than its neighbors, and if I had the energy, I could continue south to Emma. I found something like a campsite on the Camp Bird Road, then continued in the morning, driving to the final “half-tunnel” section, where huge icicles loomed dangerously low. I might have cleared them, but they also might have damaged my car, so I opted to hike the final half-hour of road to where it becomes 4WD-only. Maybe 10 minutes after I left the car, several trucks full of mine workers barreled straight through with no trouble, but I was already far enough up the road that it didn’t seem worth returning.

The road was well-plowed to the active mine, and mostly to where the 4WD road splits, after which it was completely neglected. I put on my snowshoes, then followed the previous day’s skin tracks up the road. They split at the outhouse, and I followed the ones headed southwest toward Emma for awhile, then struck out through untracked powder. 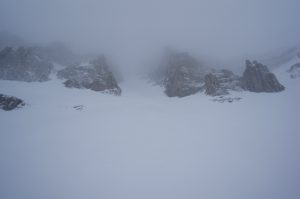 My pace became pathetically slow as I sunk ankle- to calf-deep with each step, and I was reminded what Colorado is like in May. The day remained warm but overcast, with occasional snowflakes, and it was difficult to read the terrain in the flat light, with very few exposed rocks. I fumbled my way toward the base of Gilpin’s north couloir, keeping open the option of climbing the descent route — the connecting ridge with Sneffels.

With sun and new snow there could be avalanche problems, but the day remained mostly overcast, so I decided to go for the couloir. It would probably be a slog in the fresh snow, but it would be safe and shorter than the ridge. I climbed the first third in snowshoes, then stashed them in my pack as the terrain steepened. I probably should have put on crampons, but the surface snow under the often knee-deep powder was soft enough that it was easy to continue with boots and ice axe. After some experimenting, I found a path near the right edge of the couloir that involved a manageable amount of postholing. 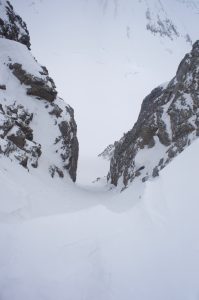 As the couloir steepened toward the top, I tried a couple of times to use the rocks to the right, but they were invariably outward-sloping and rotten, and each time I was forced to retreat to the couloir. I was missing my crampons for the final, steep choke-point leading to the ridge, as the old snow was harder here. Climbing became a laborious process of planting my axe, digging a sort of hand-hold, then making a half-dozen kicks with each foot. I eventually beached-whaled over the small cornice, and found myself maybe 50 yards west of the summit. 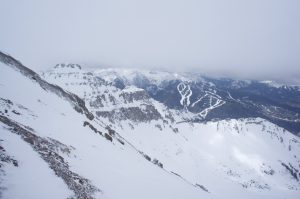 While gnawing on a partly-frozen bar, I inspected the ridge over to Emma. It looked like way too much work, so I opted for the standard descent down the ridge toward Sneffels. I found bits of use trail and a cairn on the way, but the route down the ridge was not as obvious as I had assumed. I kicked my way down a steep snow-slope just short of the ridge, slowly glissaded for a ways, then wallowed a bit before putting on my snowshoes for the slog back to the road. Though the surrounding peaks peeked out occasionally, the light remained flat, and it was to follow my outbound track until it merged with the larger skin-track. More skiers had apparently passed later the morning, and several more cars’ worth passed me as I clomped down the road to my car for a late lunch.