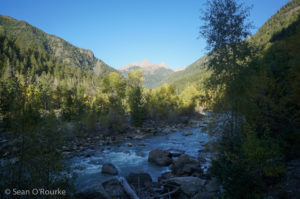 Pigeon and Turret from the Animas

Pigeon and Turret are the most visible peaks from Highway 550 of the Needles subrange of the San Juans. They were also the two most interesting peaks remaining to me on the list of Colorado’s highest 100. Doing them as a dayhike involves a long approach via Purgatory Creek and the Animas River, which I had done before to access the Chicago Basin 14ers. While Pigeon and Turret by themselves would be a “big” day by normal standards, I thought of my recent too-easy day on Rio Grande Pyramid, and of the Evolution traverse, and decided to aim higher. Looking at the topo, it seemed possible to start at Pigeon, traverse east to North Eolus (an unranked 14er, i.e. one with less than 300 feet of prominence), then continue west around the north end of Ruby Creek to either Animas or Peak Fourteen. Unfortunately the map is not the terrain, and I did nothing like this traverse. Still, in a bit over 16 hours I managed to tag Pigeon, Turret, Fifteen, Sixteen, Monitor, Thirteen, and Animas. I skipped the ranked Peak Twelve because it was not labeled on my USGS map (oops!), North Eolus because I needed water, and Little Finger and Index because they are both unranked and hard by their easiest routes.

I woke up at my quiet Pole Creek campsite at 3:00, drove over to the residential Purgatory trailhead, and was on my way by headlamp at 3:30 AM. The nighttime commute down from Purgatory and up the Animas was quiet and nostalgic; I should have put DJ Dan back in my musical rotation for the experience. I reached the Needle Creek sign in just over two hours, then continued north into new terrain, past the three shacks and dozen or so “Private Property” signs that make up Needleton, looking for the unofficial Ruby Creek trail. 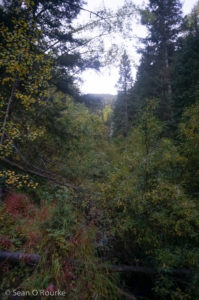 I passed a tent in the first meadow, then the trail disappeared in the second. I knew I wanted to go northwest, so I searched around the north and west sides of the meadow for the trail’s continuation. It turns out that the trail exits the southwest corner, but I didn’t find it, so I continued in the direction I wanted through open woods, following a sporadic line of reflective thumbtacks stuck in trees. Maybe this was the “trail?” I eventually lost whatever I was following, and simply made my diagonally, then straight uphill on the south side of North Pigeon Creek on faint game trails. After a bit of 4th class ugliness and brush, I stumbled upon the obvious trail a few minutes below where it crosses the creek. 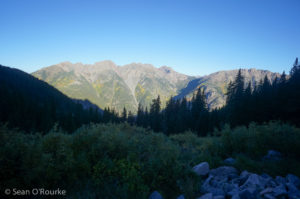 The most direct approach to Pigeon leaves the Ruby Creek trail to follow the north side of North Pigeon Creek, climbing about 2,000′ to the flat meadow due west of the peak. Guessing that the crest of the next ridge north of the creek would have the easiest terrain, I found a faint trail and the occasional cairn leading uphill. The cairns were frequent enough to be reassuring, but not enough to follow; as with many wooded ridge routes, this one would be harder to find on the way down. Climbing through the woods, I though of the Cascadian nature of the day so far: a long commute along a valley trail, then 5,500′ of elevation gain in 2 linear miles on a climbers’ trail. 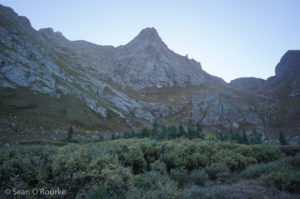 Pigeon from the west

Finally emerging into the meadow, I was surprised to see a man in a yellow jacket making his way along Pigeon’s base. I assumed our paths would converge on the northwest face, but I lost track of him shortly after spotting another figure on the grassy class 2 slope above me. He was moving quickly, and I only caught him just below the north ridge and the final class 3-4 scramble. He turned out to be an Asian man from back east, camping out for a week and hoping to clean out the Needles’ 13ers and 14ers. He had chosen the state’s best mountains, and the best time of year to visit them, but unfortunately the weather was uncooperative, with intermittent showers forecast for the rest of the week. I was glad to be dayhiking. 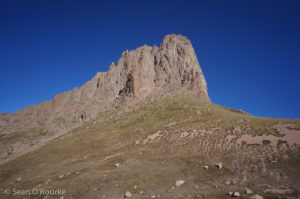 We spoke for a few minutes on Pigeon’s summit, then I tried to downclimb a gully directly to the Pigeon-Turret saddle. After some easier going, things turned steeper and chossy, on some uniquely horrible Needles rock: sharp, marble-sized gravel barely held together by I-don’t-know-what, whose surface disintegrates at a touch. I downclimbed past a couple nests of rap-tat then, chastened, returned to the standard route. Passing the Asian man again, I side-stepped and boot-skied down around Pigeon’s west face, then circled around to reach the saddle on easy grassy slopes from the southwest. Looking back, I saw that it was probably possible to climb Pigeon directly from the southeast by a convoluted class 4-5 path (the first ascent was from this side). Indeed, the traverse between Pigeon and North Eolus would be easier from east to west, going up rather than down the most convoluted choss. 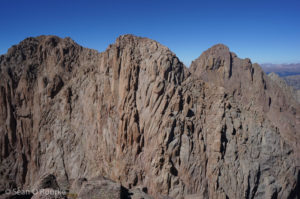 I continued up the easy class 2 route to Turret, then spent a minute eyeing the descent to the saddle with Peak Fifteen. It looked like it would go on the south side, so off I went. This proved to be the day’s crux: though the climbing was mostly class 2-3, and never harder than ~5.4, most of it was on outward-sloping gravel and rock that wanted to become gravel, demanding constant paranoia. I passed a bit more rap-tat and a fixed nut near the crux, eventually reaching the saddle. 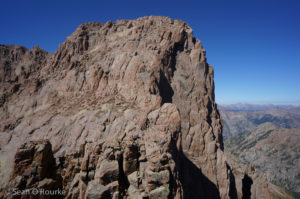 Looking down the gullies to either side, I saw that the north was near-vertical, the south steep and loose. The only way out was up and over. Fortunately, the rock quality suddenly and dramatically improved, and I had little trouble reaching Peak Fifteen’s summit. I signed the register (hi, Andrew!), then descended the standard route toward the Fifteen-Sixteen saddle. The rock quality again turned awful, but this was less steep than the descent off Turret. I passed a couple nests of rap tat near the ridge, then reached a similar saddle: vertical north, chossy south, better rock to the east. 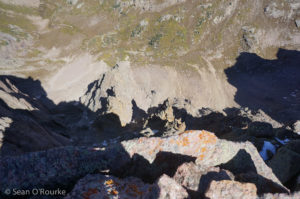 Sixteen is steep on the north side!

Just as I began the short climb to Peak Sixteen, I heard a shout behind me, and saw a man (probably the one in yellow I saw earlier) climbing up the south gully toward Fifteen’s standard route. After a short, shouted conversation and some unhelpful advice on my part, I scrambled up Sixteen on some fun, reasonably solid class 4. I looked over toward the saddle with North Eolus, but things looked complicated and likely to turn bad, so I decided to retrace my steps and contour around below Sixteen’s south ridge. 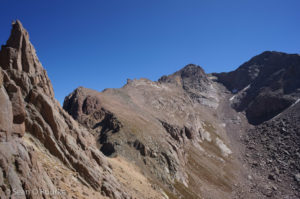 The man on Fifteen had found a route well left of the one I used which seemed to go, though he managed to break off a pretty impressive rockfall into the gully I was about to use. The gully itself was less chossy than I had feared, and I had relatively little trouble traversing to the North Eolus saddle. I eyed Little Finger in passing — it is indeed short, and looked doable — but I still had quite a bit of work to do on the other side of the valley. 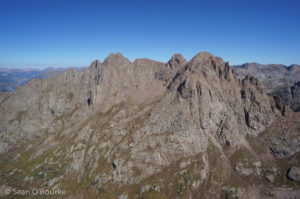 At this point I abandoned the traverse, dropping down to Ruby Creek for water instead of continuing over North Eolus and Twelve. The first part of the descent was a quick scree-ski along a goat-track. Lower down, I exited right for fear of cliffs and/or ice in the chute. This was probably a mistake, as the gully looked manageable in late season from below, and I had to deal with a bit of sketchy awkwardness to reach the valley floor. 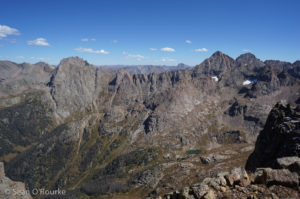 Since I was no longer traversing, I took more or less the standard route up Monitor’s west face. The view across Noname Creek to Jagged and its long connecting ridge with Sunlight was impressive, as was the view of the strangely-disconnected Arrow and Vestal to the north. The Jagged area again reminded of the Sierra, with the large Lake 12,552′, light-colored rock, and a mixture of turf and slabs. 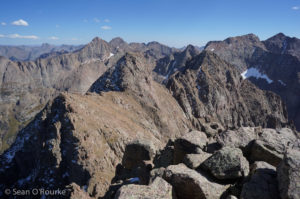 Thirteen and Monitor from Animas

The ridge down to the saddle with Peak Thirteen was another sketchy choss-fest, but I was used to that by now, and my sixth sense for choss solidity was working well. The rock fortunately improved on the class 3-4 climb up Thirteen’s east side, and the descent toward Animas was straightforward. I found a few cairns on the way up Animas, and the Summitpost printout in the register canister confirmed my plan of descent. 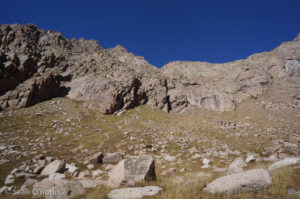 I returned to the first saddle east of Animas, then scree-skied quickly down most of the thousand feet to the grass below. Thinking I was basically home, I unfortunately strayed a bit too far right, and had to deal with another 50-foot rotten downclimb to reach easy ground. I made my way down mostly easy grass and slabs, with only about 50 years of vicious bush-whacking to reach the “trail” below. 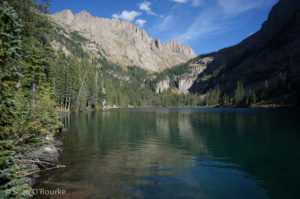 While easy enough to follow, I found the Ruby Creek trail both long and surprisingly brushy higher up. However, I was still feeling fresh, and the striking views ahead to the West Needles, and behind to the craggy south side of Ruby Creek, kept my mind occupied. I eventually reached the two meadows near the Animas, and saw that the guy I met on Peak Fifteen had not yet returned to his camp. Hopefully he did not have too long a day. 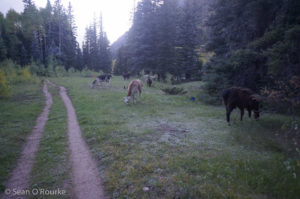 I removed my pant legs, then fortified myself with Pop-tarts and Ibuprofen for the long run home. I passed some campers and a herd of grazing (i.e. not dead) llamas near Needleton, then started jogging. I felt freakishly fresh on the net-downhill trail, covering the seven miles to Purgatory Creek in about an hour. I had expected to do this section at night, and was pleased both to have easier daytime running, and to see the sunset on Pigeon and Turret behind me. It took another hour to climb from the Animas to the trailhead, with only the last 5-10 minutes by headlamp. I hadn’t found the elegant traverse I had hoped, but it had still been a satisfying day.

Pigeon from the west

Turret and 14ers from Pigeon

Toward Purgatory from Pigeon

Sixteen is steep on the north side!

Animas and Thirteen from Monitor

Thirteen and Monitor from Animas

Pigeon and Turret from the Animas