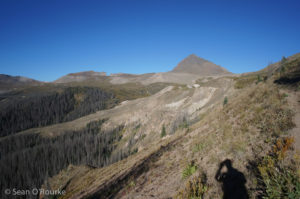 Rising alone above a low, gently-rolling part of the San Juans, Rio Grande Pyramid is a landmark visible from many peaks in the range. It is also one of Colorado’s more remote major peaks. It has little to offer from a climber’s perspective — it’s a basalt choss-pile a long hike from the nearest road. However, since I’m not primarily a climber, I was looking forward to finally standing on top of it. I remembered that it was remote, but when I looked up the details the afternoon before, I realized that it is only “remote” in a Colorado sense of the word: 20 miles round-trip and 4,400 feet of gain from the Thirtymile trailhead at Rio Grande Reservoir. 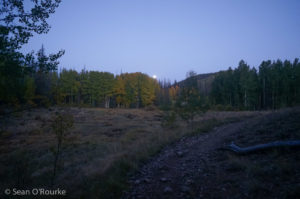 I woke to my 5:00 alarm, drove the rest of the way to the trailhead, and started by headlamp just before 6:00 AM. This would be a short day, but sometimes morning headlamp is good for the soul. I spent perhaps a half-hour by headlamp traversing along Rio Grande Reservoir’s southern shore, then turned it off as I climbed through the short, narrow basalt canyon of Weminuche Creek. The canyon quickly opens up into broad meadows, slowly gaining elevation to the nearly-imperceptible Weminuche Pass. Though this trail sees a lot of horse traffic, I found it less repulsive and dusty than the Sierra stock trails I have recently been traveling. Along the way I passed a “sick” llama, staked to the ground and “resting” in a very corpse-like way. 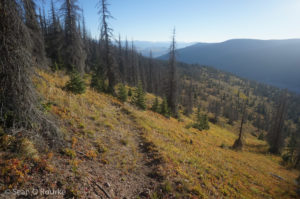 At the pass, I turned off the main trail on the abandoned Skyline trail. For some reason this is the standard approach for RGP, though the likely-maintained Divide Trail heads in more or less the same direction less than a mile farther south. Despite the lack of maintenance, the trail is only obliterated by deadfall in one small section, and remains usable through the long brush traverse above Rincon La Vaca. I finally found sunrise a couple hundred feet above the pass, and hiked the climb through sparse woods in a t-shirt. 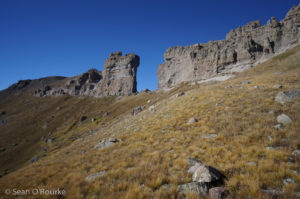 As the trail flattens out around 12,000 feet, Rio Grande Pyramid appears in its classic pose, still discouragingly far away. The trail makes a long westward traverse through endless brush, which turns out to be surprisingly runnable on the way down. The standard route up RGP’s east face and ridge is clearly visible the entire way. While Summitpost recommends visiting RGP and the window as separate out-and-backs, that seemed wasteful to me. I decided to tag the Window first, then figure out a line back up the peak from there. 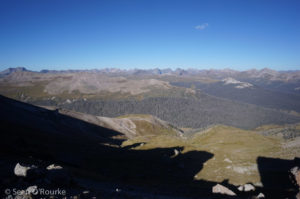 There are a mass of more- and less-usable old trails in this area. The most usable are of course the CDT and an equestrian route along part of the Skyline to near 12,600′ on RGP’s east side. I followed the Skyline toward the unnamed lake below the Window, then left it cross-country to pick up a faint old trail climbing through brush and talus just northeast of the Window. Another trail connects the Window directly to the lake. 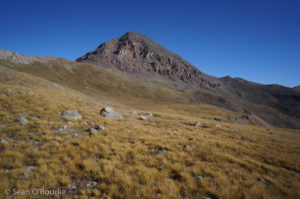 After looking through to the “real” San Juans — the Grenadiers and Needles — I made my way north across the grass toward the peak. RGP’s south side is a mess of rotten cliffs and scree, so I decided to traverse around to the eastern standard route, which was presumably less bad. This worked well: I stayed above 12,800′ across a bench, then briefly contended with some nasty loose stuff before picking up the standard route around 13,100′. 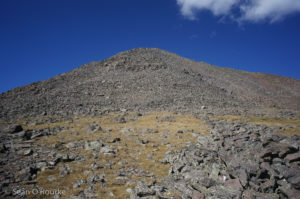 Though the standard route is less bad than the rest of the mountain, it is still a mound of ill-behaved basalt talus, so the climb wasn’t overly inspiring. The summit, however, is well worth the effort. Most of the terrain north, south, and east is a rolling subalpine mix of (dead) conifers, aspens, and meadows. To the west, the Grenadiers and Needles rise 4-5,000 feet above Vallecito Creek. I could easily pick out Arrow and Vestal, but the Needles were too jumbled and unfamiliar for me to identify. Clearly I need to pay them another visit. I signed the surprisingly-busy register, then headed down the standard route. 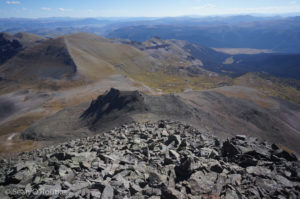 After getting off the upper talus-cone, I realized I had chosen wisely visiting the Window and RGP in this order: the standard route to the Skyline was a quick boot-ski on the way down, but would be a miserable talus- or sand-slog going up. I had no reason to jog the trail back, but it seemed like the natural thing to do. I passed the “resting” llama, which had attracted a cloud of flies by now, and a few dayhikers near the trailhead, but was surprised by the absence of backpackers and leaf-peepers on a pleasant Saturday. I had some post-hike tuna, then informed the llama’s owner of its unfortunate demise on the drive out. The outing had only taken about 6h45; I clearly needed to raise my sights.