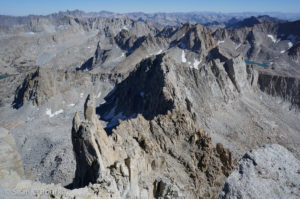 I have already climbed Darwin from the north and west, but those who know a bit about Sierra climbing will understand this trip. 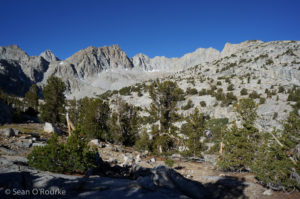 I waited for dawn, then mostly tuned out the surroundings as I made my way around the lake, up the switchbacks, and on into the maze of lakes and trails in Sabrina Basin. It felt like fall, with the aspens starting to turn, the sun rising low and late, and the air cool enough to hike in an overshirt. Over the years I have gone from awe at the basin’s lakes and jagged peaks, to frustration at the length of the horse-ravaged trail, to familiar, benign indifference, and the two hours or so to the Midnight Lake junction passed almost unnoticed. 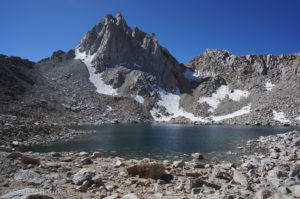 After a short deviation toward Hungry Packer Lake, I took off up the broad, slabby ridge toward Haeckel Col and started paying more attention. I had used this route twice in the past, for Goddard and Spencer, and I believe it is the least-bad way for day-hikers to reach peaks between Muir Pass and the Darwin Bench. It is still awfully long, and I was feeling sluggish, stopping frequently and eating more of my food than I needed. Passing some unnecessary cairns, I eventually reached Lake 12,345′ at the base of Haeckel’s north face, then followed a faint boot-pack up the sand and boulders to the pass, just north of the saddle. 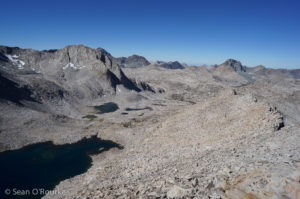 I was not impressed with my time, and still not feeling fast, so I sat down to eat my fish and decide how to proceed. This would be the natural route to dayhike McGee, but I doubted I had the energy for that. I could also just tag nearby Point 13,332′ and go home, or simply turn around at the pass. Indecisive as usual, I found a comfortable spot and some suitable listening material, then let my mind drift for an hour or so. 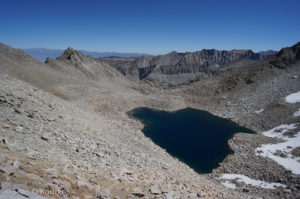 I eventually decided to at least check out 13,332′, and was about to leave when I spotted a backpacker making his way past 12,345′ toward the pass. Curious to see who it was, I waited another 15-20 minutes for him to reach me. I hadn’t met him (Dale?) before, but he turned out to be widely-traveled in the range. On this trip, he was headed around to Darwin Bench and probably out Lamarck, after spending a few nights in Sabrina Basin eating through enough of his 11 days of food to be able to get over the pass. 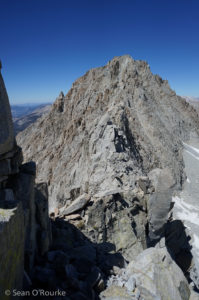 After we parted, I took off for 13,332′. Having scoped out the initial route, I eschewed the crest, which would cost a lot of difficulty and up-and-down, instead making a class 2-3 traverse up boulders and ledges on the right. This had the side-benefit of protecting me from the wind whipping over from the west. At the summit, I found a register featuring some well-known names from before I was born (Lane, Smatko, etc.), and more recently some more and less familiar ones, mostly doing the popular Evolution Traverse.

I eyed the slope back toward Lake 12,345′, then the ridge north to Darwin, then psyched myself up enough to “at least start on” the latter. After a quick mistake on the east side, I downclimbed past some difficulties on the west, and things fairly quickly turned serious. In general, the ridge to Darwin is a gradually-rising sawblade, with sides steep enough that it is often best to stay on the crest. The rock is mostly good, usually better to the west and dirtier and more rotten to the east (as expected). There are many possible paths, and the one I took is too complicated to describe, but I will describe some highlights. 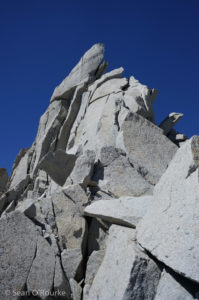 Got around this somehow…

The first main tower north of 13,332′ is, I think, the crux of the route for many people, with a reportedly 5.9 hand-crack leading up the crest. I explored a bit, and nearly turned around — once past here, my retreat would be a trek down the west side and around over Haeckel Col — but found a series of chossy ledges and low 5th class boulder problems that got me back to the crest past the difficulties. 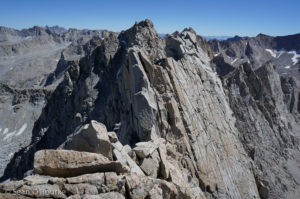 Past here I stayed mostly on or west of the crest for awhile, pulling the odd bit of low 5th class or alpine craziness, including some chimneying between giant blocks and a 20-foot a cheval along the crest. I found a few slings in random places, signs of other climbers’ distress. As things steepened toward Darwin, I again dodged some difficulties to the east, then was forced back east for the final climb. 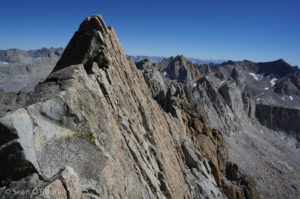 I climbed some knobby 5.5-ish face up to a large nest of rap-tat, staying left of the rappel line, then continued up to an impasse. Seeing a cairn on a fin to the west, I retreated a bit, then made an awkward traverse to pass it, at one point trying and failing to go down and around via perpendicular chimneys and a squeeze. I climbed a dirty gully, passed under a chockstone to the east, then returned to the crest for most of the final climb. Shortly below the summit, I was again forced west, this time climbing a dirty and unstable-looking garbage-vein past another rap station. I wasn’t too happy doing this, but I climbed paranoid and nothing broke off. Above, it was smooth sailing to Darwin’s summit. 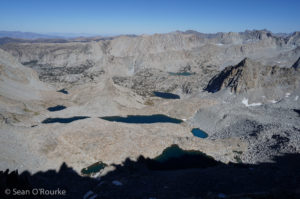 Most of the register entries were from traverse parties — it’s like the JMT, but for climbers! I added my own swimming-upstream entry, then headed off down the east face and northeast ridge, all of which was supposedly class 4. After some initial steep dirt in a chute that sucked, I found some dirty but more pleasant ledges, and headed generally north to avoid cliffing out at the bottom of the face. I reached the northeast ridge near its base, and found some surprising difficulties, including what I felt was a low 5th class downclimb next to a fixed line.

After a bit more shenanigans getting down from “Darwin Col,” I headed down easier ground to Blue Heaven Lake. In a “what the hell” mood, I went cross-country down the Hell Diver Lakes drainage instead of picking up the trail at Midnight Lake. The middle lake is home to an impressive disappearing act, its outflow buried deep in a talus blockade. I picked up the trail just above the big rock-hop across Bishop Creek, then hiked and jogged back to the car, reaching it with just enough daylight left to rinse off my feet and cook some sort of dinner.

Haeckel and Darwin closer up

Got around this somehow…