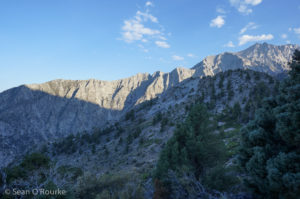 While California’s highest peak, Mount Whitney, hides well back from the Owens Valley, its second highest, Mount Williamson, stands strikingly close to the eastern edge of the range. Its long, twisting northeast ridge, rising 8000 feet from the sloping valley bottom, is one of the more striking features seen while driving along highway 395. This long, waterless ridge, rated between class 4 and 5.6 depending upon whom you believe, is something of a classic “type II fun” Sierra climb. 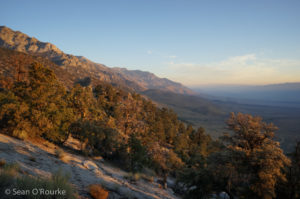 After three solid days, the last a dayhike to Bolton Brown out of Red Lake (ugh), I took a day off, then drove down to Independence to camp at the base of the ridge. When my alarm woke me entirely too early, I felt stiff and unmotivated, and decided to take another day off and try a later start. An hour-plus bushwhack by headlamp was not how I wanted to start my day, so I got an irresponsibly late start around 5:45, using my headlamp just long enough to make the surprisingly tricky crossing of Shepherd Creek before pocketing it to begin the ‘schwack. I knew I had a few hours at the end of the day descending Shepherd Pass that I would almost rather do in the dark. 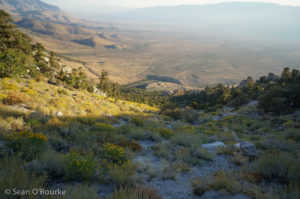 The first 3500 feet do not follow a well-defined ridge, but instead climb a steep slope of decomposed granite — basically kitty litter with trees and brush. As on the similar start to the northeast ridge of Lone Pine Peak, I was able to find some game trails to make it more manageable, but it was still a slog. Fortunately the slope is angled so that I remained in the shade for most of the climb, staying cool and saving my precious water. 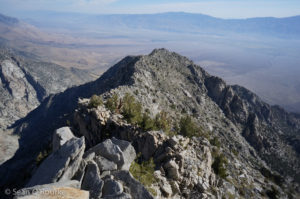 View back down lower ridge

Above this initial climb, the ridge becomes narrower and flatter, entering a new regime of suck. From 9900′ to where it turns south around 11,000′, the ridge is mostly uneven on top, with steep, sandy, brushy terrain on the south side, and often unusably steep rock on the north. The easiest path usually stays close to the crest on its south side. I found an old paint can hanging from a tree, and possibly some old boot-prints, but there were very few signs of human passage. 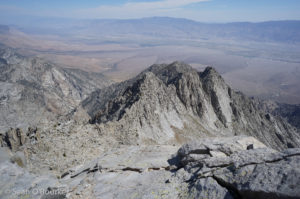 Looking down from above first south turn

Around 10,500′, the ridge is cut by a double notch, which presents the first real climbing challenge. I got into the first notch via some 4th class on the crest or to its north, then continued along and up the right (north) side on class 3-4 ledges and slabs. The terrain on the left may have been less steep, but the lack of brush on the right made it seem preferable. From here to the southward turn I stayed close to the crest, which offered brief stretches of quick hiking broken up by boulder problems. After a morning of brush, I welcomed something more like climbing. 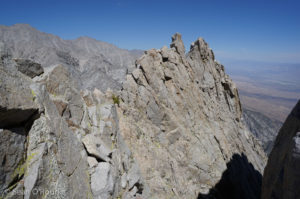 Passing the turn, I stayed right of the crest, diagonaling up class 2-3 terrain to where the ridge flattens out near another notch. It might be easiest here to head far right and climb the talus-slope, but I thought it would be more fun and sporting to stay somewhere near the ridge. I found the first crux near a step in some reddish rock that was just a bit too large to jump. Climbing down the left side of the ridge, I found a few pieces of rap tat, which I climbed past and around via some tricky traversing right and down, to where I could regain the ridge at a notch. 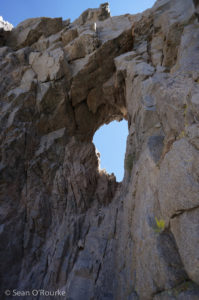 Farther up, where the ridge splits, I was again forced down the left side. This time, I was surprised and pleased to find a natural arch burrowing through the notch that had caused me to leave the crest. I passed through to the right side of the ridge, then climbed some easier class 2-3 slabs to where the ridge flattens and turns back north. I am amazed that I did not find any mention of this arch on Summitpost, since it seemed natural to pass through it on the climb. 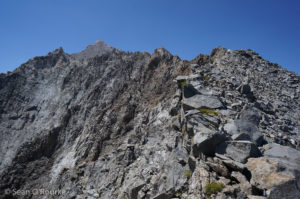 The ridge becomes easy talus here, and it looks like it should be smooth sailing to the top of the East Horn. But the rock turns ominously reddish as the ridge makes another jog south, usually a sign of rotten, shale-y rock in the Sierra. After climbing the crest of the garbage-fest for a bit, I crossed again to the right side to avoid some decomposing towers, then began slogging the final talus-slope to the East Horn. Due to a combination of altitude and late-season fatigue, I was painfully slow on this final easy climb. 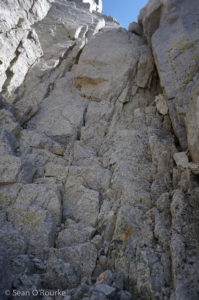 With most of the distance and elevation gain out of the way, it was time to deal with the bulk of the technical difficulty. I dropped left of the ridge a bit on some broken terrain, then returned to the crest as the left side dropped away. Where the crest got serious before the first of two notches, I downclimbed to some rap tat, where I was momentarily stymied. Looking back, I saw that I could traverse back, down a sort of dihedral/chimney, then forward again to the base of the apparent rappel. This second crux felt about as hard as the first, definitely harder than 4th class, but not 5.6 as some claim. The rock was decent, and I felt reasonably secure in running shoes.

I could have climbed back up to the ridge crest from here, but I remembered that there is a second notch, and I suspected that going too high would lead to more difficulties. Instead, I traversed some crappy dirt-ledges, crossed a partially ice-filled gully, then crossed some outward-sloping ledges to emerge near the base of the second notch. While not as hard as the chimney, this section was probably more intimidating, made worse by leftover snow from the unusual storm a week before. 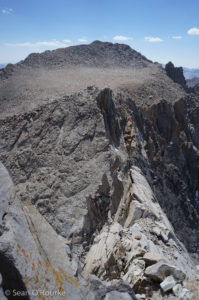 Back on easier class 3 terrain, I quickly scrambled to the top of the West Horn, where I saw that the difficulties were not quite over. Rather than guessing the route, I took the time to read Secor on my camera, which said to drop 200 feet (vertically? straight-line?) on the right side before passing through a notch. I dropped part of this distance, then saw a ledge/crack system that might save some elevation loss. I don’t think it saved time or effort, but it certainly added some interest and spice. Returning to the ridge crest before the notch, I was surprised to find an incredibly sheer knife-edge. Resisting the urge to further tear my pants with an a cheval, I carefully hand-traversed along this section, gasping in relief when the ridge once again broadened.

I traversed down into Secor’s notch, and found easier terrain leading to the gap with the true summit. A final traverse left around a slabby knoll led to the summit sand- and talus-plain. I was tempted to skip the summit, but made the trudge to see if the old register was still there, and to enjoy my summit fish a bit over 9 hours into the day. The register was intact, but the talus gnats had apparently migrated up from Lake Helen of Troy since I was last here in 2012, so I moved on quickly, cramming down some pop-tarts as I boulder-hopped toward the tourist route. 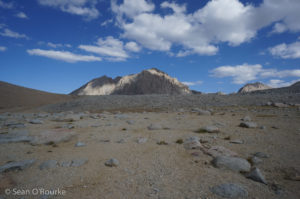 Williamson from near Shepherd Pass

The rest of the day was familiar: slide down the loose chute, hop across the Williamson Bowl, then make the surprisingly long hike past Tyndall to the Shepherd Pass trail. For better or worse, I was fast enough to do the trail entirely in daylight. The top section, which switchbacks down a steep scree-slope, was partly destroyed as usual. Below Anvil camp, I saw signs of a trail crew re-routing (and doubtless lengthening) the trail where it crosses a dirt-gully. Though frustratingly low-angle, the trail is at least pleasantly runnable from here to the base of the dreaded sand hill, and I had enough energy to make good time. I hiked the hill, hated life down the endless switchbacks into Symmes Creek, then appreciated the newly-improved water crossings on the final stretch to the parking lot.

As I was parked a mile or so away at the mouth of Shepherd Creek, I slowed briefly in the parking lot while preparing to jog the road. A man just packing for a late start to a backpack hailed me and asked me my name; I gave it warily, figuring I had offended some authority or other. Instead, he turned out to be the guy who had videotaped me coming down the very same trail on my 14er record run in 2012. After getting over the amazing coincidence, we talked for awhile, then he got back to packing while I jogged and hiked the remaining distance to my car. I had not felt fast for most of the day, but I think my time of around 13h45 is fairly respectable.

East Horn in the distance

View back down lower ridge

Looking down from above first south turn

Looking down from East Horn

Williamson from near Shepherd Pass