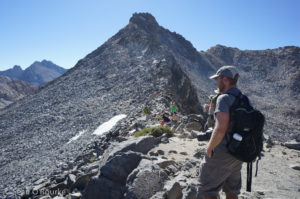 It was the final day of the Challenge, and a number of us were camped out in the Onion Valley parking lot. It was also a Sunday in August, so the Challenge crowd, which overwhelms lesser trailheads, was lost in the sea of cars from dayhikers, backpackers, and fishermen. I had never seen cars parked so far down the road at Onion Valley. 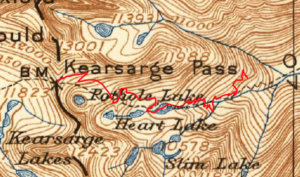 Other than the frustration of a trail reroute adding a bunch of horizontal switchbacks, Kearsarge is a pleasant approach, and it is a shame that I don’t get to use it more. I hiked along pleasantly with the group on the lower section, then cut ahead on the old trail to reach the pass a few minutes ahead of the rest. I stopped to eat and enjoy the view of Brewer and the Kearsarge Pinnacles while they caught up, then took the old trail down the other side. It has been deliberately destroyed, with rocks piled on its graceful curve, but it is still faster than the new one. 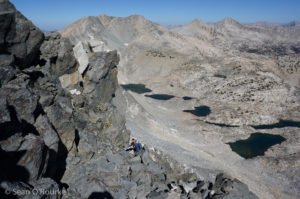 Bob on a bit of 3rd class

I had not been to Glen Pass since 2011, a heavy snow year, and was surprised to find a dry stream and no snow on the south side. I was also a bit taken aback by the crowds. We had timed our arrival to coincide with the flood of people headed south from camp at Rae Lakes, either bound for Whitney on the JMT, or headed out to Kearsarge or Kings Canyon after a weekend backpack. I chatted with two of the friendlier members of the dozen-strong crowd at the summit, then a few of us surprised them by taking off up the ridge toward “Glacier Spike,” which Bob had chosen as this year’s final peak. 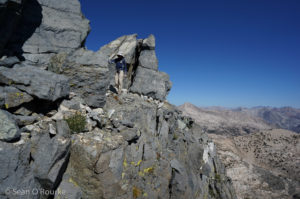 While the others traversed across loose-looking stuff north of the ridge, I found a pleasant, solid sidewalk up the crest, which took me nearly to the final step before the summit. I contoured left to meet the others, then climbed some class 3-4 terrain to return to the ridge just before the first of two summit regions separated by a steep gap. While the others followed the crest to the gap, then milled around in confusion, Bob and I snuck along a ledge on the left, then climbed through it to the right-hand side. 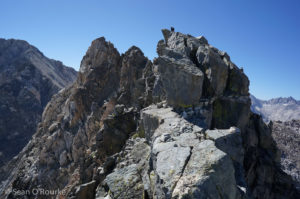 Someone stuck before the gap

Seeing a fourth class way to what might be the summit, I told the others I would check it out, then disappeared around a corner. As it turned out, I forgot to shout back that it worked, and they didn’t wait for such a shout. While I made my way over a black, slightly lower bump to the flat, white summit, Bob, Mason, and Gil dropped down and around to the south and found an easier way, joining me a few minutes later. From the summit, it became clear that the peak is much easier from the south, and that it is possible to shortcut the trail by traversing to the saddle with Rixford, then dropping south toward Kearsarge Lakes. 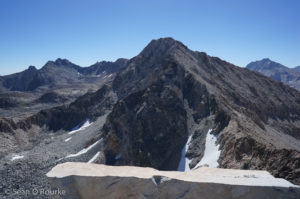 The four of us descended southeast, waving unhelpfully at a few others trapped just short of Glacier Spike’s summit. I left the others at the saddle, traversing on over Rixford, “Falcor,” and finally Gould to rejoin the trail at Kearsarge Pass. Rixford was just a big talus pile, though mostly solid when I stayed near the ridge or on a helpful goat-path. Looking back from its summit, I saw that the others had still not found their way to the summit in nearly an hour of trying. Most eventually made it, but at least one person was surprisingly defeated. 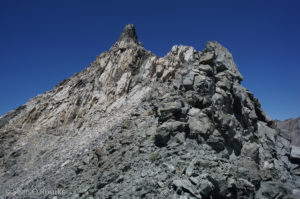 Falcor was a bit trickier, and I made it unnecessarily more so. I headed up a black-and-white gully to the west side of the golden summit block. Then, instead of traversing the south face to the possibly-easier east side, I fourth-classed my way up the west end. I worried at a couple places that I had spiraled into a vortex of bad route-finding decisions, but it all worked out in the end. From the register, I learned that “Falcor” is the name of the good-luck dragon (really a creepy giant man-dog that flies by flapping its ears) in “The Never-Ending Story.” If someone wanted to make a play on neighboring Dragon Peak, at least they could have chosen a real dragon like Smaug or Glaurung… 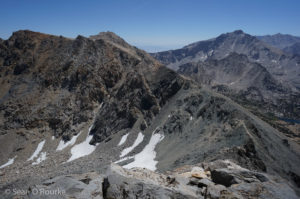 Ridge to Gould and Kearsarge Pass

After a bit of third class, things got much easier on the way to the popular Gould. I boosted onto its summit block, then hid behind it to eat my last summit fish and savor the end of another Challenge before sand-skiing back to the trail. I was torn between desires to follow the old direct trail and not to be yelled at by self-righteous backpackers, so I followed a bit of both old and new. Apparently I was lucky, since some other finishers reported being approached by an overzealous ranger who asked for their permits (unnecessary for dayhikers) and sternly told them to stay on the trail (where they already were). I doubt she would have accepted my story about following the old trail for research purposes.

Since I wanted to sleep up high, and had no need to head into town, I hung out with a changing crowd of Challengers into the early evening, then retreated to my car to read sometime just before when Scott finally returned from his final, insane 14.5-hour day. Having missed the last two years, the group had changed enough that I felt like a bit of a stranger, but it was a fun time overall, and a good way to stay focused and kill time while my hand continues to heal. I am less enamored of the Sierra than I was before spending more time up north, but they’re not a bad place to spend this part of 2016.

Bob on a bit of 3rd class

Someone stuck before the gap

Ridge to Gould and Kearsarge Pass