“Firebird Peak” is a bump on Norman Clyde Peak’s long northeast (“Firebird”) ridge. I had originally planned to find an alternative, but my only unclimbed alternate from the South Fork trailhead was “Big Kid,” a monstrous pile of sand, and I had little energy or time to plan after the previous 12-hour day. JD was planning to continue to Norman Clyde on his SPS list death-march, and I made noises about doing the same, despite having already climbed it twice before. 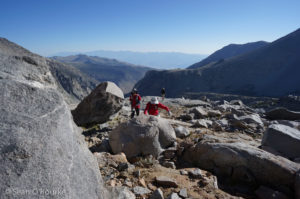 There was a healthy crowd on the South Fork trail for the 6 AM start. This is one of my favorite approaches for several reasons: the trail is livestock-free and built for humans; I used it for some memorable early Sierra climbs back when I was in school; and the sunrise on Middle Palisade’s and Norman Clyde’s east faces is always inspiring. As usual, I traded places with Bob on the way up the switchbacks: I would pull ahead while hiking, then he would pass me while I stopped to pee, put on sunscreen, or whatever. As I learned on my first Challenge, Bob almost never stops (or eats) on hikes. He also knows secret trails, as he demonstrated by emerging from the trees just ahead of us near Finger Lake after dropping behind below Brainerd. 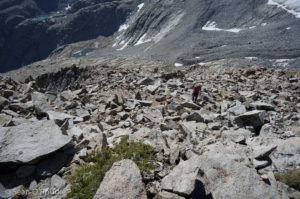 After some confusion about which point along the ridge was Firebird, we deviated from the standard Middle Palisade approach to climb a long, mostly-stable boulder-field toward the summit. I was tired, but still had an automatic sense of how fast I should go on this terrain when rested, so I ascended in bursts, periodically stopping to let the lactic acid drain from my legs. Scott, just behind me, mistakenly thought I was just stopping to take in the view. 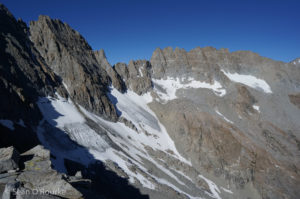 Reaching the summit, I found the register, which contained a few entries to the effect of “this thing has a register? Okay…,” then sat to wait for company. I eventually got out my summit fish, implicitly admitting that I would not be tagging any more peaks today. JD, who had had a nearly 20-hour ordeal the day before, arrived some time later, admitting defeat on Norman Clyde. He was dealing with a malfunctioning ankle that turned out to be much worse than he expected, and would send him home that evening.

I probably spent about an hour on the summit before dropping down the dirt-slopes south to pick up the Middle Pal route and follow the familiar boulders and slabs back to Finger Lake and the trail. Talking with Robert near Grass Lake, I was surprised to meet Iris coming up the trail. Like JD, she was coming off a brutally long day, and had started around 10:45. In classic Iris style, she appeared to be cheerful, unhurried, and on the verge of disintegration, held together by tape and braces. There was no need to hurry, but Robert and I convinced each other to run from the switchbacks back to the trailhead, leaving me with plenty of time to socialize at the trailhead before descending into the brutal 100-degree heat of the Owens Valley. The next day’s low start meant there would be no convenient, cool trailhead camping.