The Powells and Clyde Spires 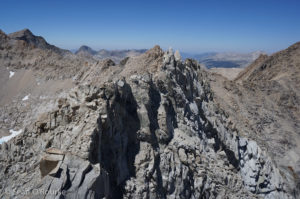 The Challenge Peak for the day was “Potluck Pass Peak,” a fun 4th class scramble reached by a scenic stroll through the Barrett Lakes. Since I had already done it as a bonus in 2012, and since there was more or less nothing I had yet to climb out of South Lake that was not insane (i.e. would involve crossing Le Conte Canyon), I headed to the Sabrina basin to tag some things on my to-do list. I am not always a fan of the area, with its long approaches and heavy packer use, but this was to be a fun outing, with interesting scrambling, some nice summits, and quiet time to myself. 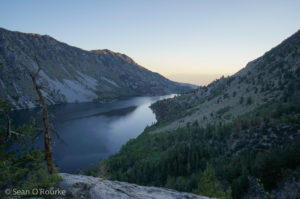 I found a spot to sleep in the small parking area near the North Lake turnoff, set my alarm for 5:00, and was soon asleep in the pleasantly cool air near 9000 feet. Waking to my alarm, I discovered that I had acquired a neighbor overnight, and he too had set his alarm for 5:00. We both flailed around preparing for awhile, presumably watching each other’s bobbing headlamps. I finished last, taking the time to heat my cup of sadness, drove to the outhouse at Sabrina, then back to the tiny day use parking area at the trailhead, and got started just before 6:00. 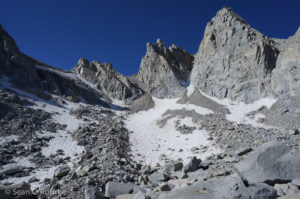 I feel guilty listening to stuff while hiking with other people, so I had plenty of listening material queued up for the familiar miles to Blue Lake, then the unfamiliar ones past Baboon and Sunset Lakes. Above Sunset, I was presented with what used to be a small glacier, and an unappealing dirt-chute leading to the Powell-Thompson col. Fortunately, a slabby rib on the right got me most of the way across the moraine, and snow and bits of hidden ice eased passage to the base of the chute. I carefully kicked steps up the snow to one side, then switched to stepping nervously on rubble frozen into the dirt/ice substance, and finally worked my way along the right-hand wall to the col. 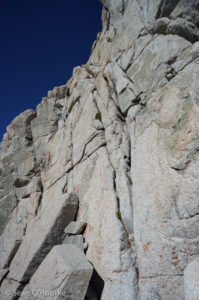 Climb out of P-T col

The climb from here was probably just class 3-4, but with my current supply of hands, I had to backtrack a few times before finding a route that did not require a big right-hand mantle. An ascending traverse up the south side of the ridge eventually deposited me on the summit sand-plateau, with “Powell” close to my right, “Wesley” farther ahead to my left, and “John” obscured by the plateau/ridge in between. Clearly I had done things in the wrong order. 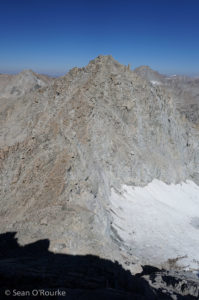 I tagged Powell (the one on the SPS list), then marched across the sand to easily tag Wesley before getting back to serious work on the ridge to John. I descended a loose chute to the south a bit, then retreated to stay closer to the ridge. An experiment with a line on the north side worked, but with some sketchiness, so I returned to the crest, then worked my way along the top and ledges to the south, with occasional exposed moves between levels. Things got easier at the saddle, and I was soon on the last and highest JWP summit. 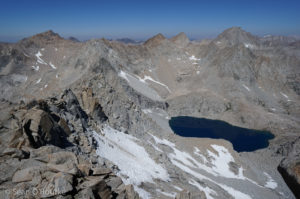 When climbing this point several years ago after a big winter, Bob had used a snow/glacier route to the north, but I had no crampons or axe, and years of drought had pretty much hosed that option. Besides, I needed to be south of Echo Col for the standard route on Clyde Spires, my next objective. This was probaboy the worst part of the day, a long, right-handed descent of garbage chutes and fins south of the ridge, leading finally to boulders below the pass.

Coming off this experience, I found the Clyde Spires’ south ridge quite pleasant, a quick-for-tired-me hop up a stable boulder field nearly to the ridge. I checked out the east spire first, having to fetch a cheater block to overcome what would normally be an easy two-handed boost, and was soon on the big flat summit next to the register can. I sat down and had almost started eating my fish when I noticed that the west spire was both higher-looking and more spire-like. Secor confirmed that it was higher, so I packed up the register and made my way to the other summit; Norman deserved as much. 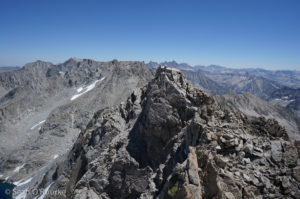 The traverse was wander-y but not difficult until just below the summit block. Getting to the base seems to require either some chimneying from the south or something equally hard and slightly weirder from the west. I chose the chimneying, clanking and grinding as the register canister on my back gripped the rock. The summit block itself is maybe 10 feet high and very close to being one of the harder blocks in the Sierra. Fortunately, there is a sort of “mounting block” on its west side, and a perfect series of holds spiraling around north to the east side, leading to a flat top with just enough room for one person and his fish. 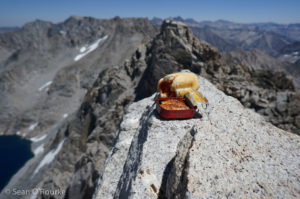 Focus on what matters

I put the register in its rightful place, then had a late lunch while contemplating my return. I could retrace my steps down the south ridge and come back over Echo Col, but that seemed longer than traversing onward over “Crumbling Spire” to Wallace Col. Other than one less-sketchy-than-it-looked class 4-5 downclimb, the traverse worked well, and I was soon looking for the least-bad way down the east side of the col.

I had hoped for easy scree-ing, but instead found mostly steep loose garbage that required a bit of care. Like Haeckel-Wallace Col to its north, this is not a “pass,” but a saddle where either side should be descended but never climbed. Filling my water at a nice lake where the two cols join, I noticed some people in the talus above. They waved when they noticed me, and I climbed out of my way within hailing distance to see what was going on. They turned out to be a group camped at Hungry Packer Lake, out for a “fun” wander through the talus, and unsure of their exact location. They seemed okay once I oriented them on their map, but if I had been thinking, I would have told them to try hiking up to the excellent Lake 12,345′ instead of suffering around below Wallace. Sabrina’s length began to weigh on me as I joined the convergent trails near Moonlight Lake, but I had plenty of listening material, and enough stores of good-will from the day to last me to the trailhead. After a long-ish 12-hour day, I rinsed off in the creek, stopped briefly in Bishop for dinner and a chat with Bob, then drove back up to cooler climbs above Big Pine to prepare for the next day.

Climb out of P-T col

Focus on what matters