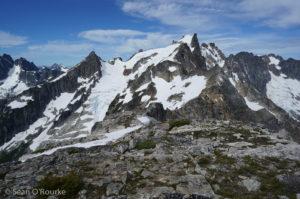 East Fury anchors the southern end of the core Northern Pickets, which wrap around Luna Cirque to Challenger. The easiest way to reach it requires 17 miles along the Ross Lake and Big Beaver trails, a heinous bushwhack up Access Creek, and a long traverse over snow and rock along the ridge west of Luna Peak. While I had hoped to do something much more ambitious, simply tagging East Fury by itself was a serious undertaking, significantly longer than doing Luna by the same approach last year.

Planning something bigger, I did some sleep manipulation and napping to be at least somewhat rested for a start just after midnight. The advantage of doing the Big Beaver approach at night is that you don’t have to think so much about how long it is. The main disadvantage is the giant toads, which squat in the middle of the trail and galumph in some random direction if you give them time to think. I made the Big Beaver junction in about 1h20, and was at somewhere near the start of Access Creek by 3:45 AM, much better time than I had expected. 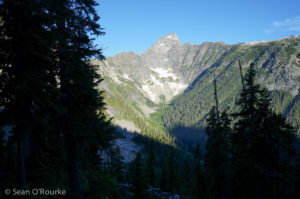 Luna from the wrong place

I was not really prepared to start the cross-country in the dark, but I had a map and GPS, and Access Creek sucks no matter what, so I put on my pant legs and headed off into the woods. After thrashing down to the stream-bank and looking around a bit, it was light enough for me to pick out a decent ford: I saw no sign of last year’s complicated log bridge. I splashed through the slow, thigh-deep water without bothering to take off my shoes or pants, as I figured they would be soaked by brush anyways. 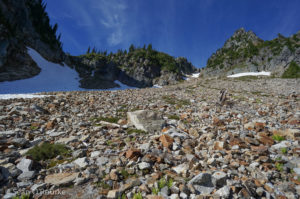 Slog up to Luna-MacMillan saddle

I cut back and forth as I climbed the other side of the Big Beaver, periodically checking my coordinates to try to figure out where I was relative to Access Creek. Unfortunately my map wasn’t high-resolution enough to be much use, as the creek is completely undetectable from as little as a hundred yards away, so when I finally got a clear view around 4500′, I saw that I was well above the creek on the south side of its valley. After a descending traverse with much misery and trashing through pines and berries, I crossed to the north side for a bit, then crossed back south to pick up the “trail.” I estimated I had lost an hour or more versus the correct route. 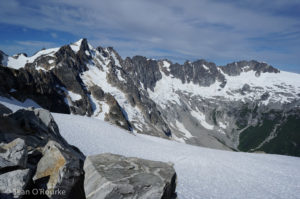 At least I knew where to go from here, and I made quick work of the gully up to the saddle with MacMillan Creek, which still held a bit of avoidable snow. After a short break enjoying the view of the Southern Pickets, I made the long traverse to the Luna saddle, where I got my first glimpse of Fury, far to the west along an undulating ridge.

After unnecessarily traversing around the first bump, I stayed mostly on top of the ridge, which is mostly broad and flat. I found a few cairns at one point where the route deviates north, and some typical Cascades rappel-junk where it deviates south. Though none of it is difficult, the traverse is long, made longer by the remaining patches of soft snow. 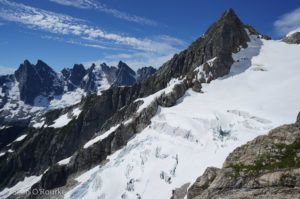 Shortly before where the ridge turns to sharp, red choss, the route traverses south across a bowl, going under some rock buttresses to reach the Southeast Fury Glacier. The glacier itself was both badly broken up and covered in soft snow, so it was faster to follow the ledge-y third class rock to its right most of the way up, then traverse a bit of snow to the saddle just east of the summit, which is hidden behind a snow dome from this direction. I crossed the top of the glacier, then cautiously kicked my way up the left side of the snow dome before transitioning to more third class rock to reach the summit, about 11h35 from the car. 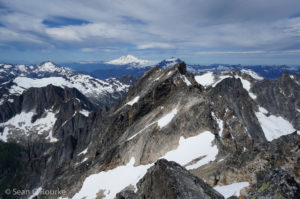 It was a perfect day, with most of the Cascade visible, and even Rainier making a ghostly appearance far to the south. The rest of northern Pickets stretched out to the west and north, as well as the long return route from Challenger to Beaver Pass. I thought about traversing over to West Fury, which is not that far away, but the ridge looked like complicated choss, and I was a bit demotivated by the morning’s Access Creek fiasco. Instead, I sat around perusing the register, eating, and taking photos, then began my return. 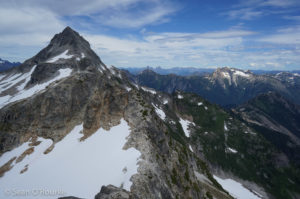 The steep snow slopes were unpleasantly soft, so I stuck to rock around the snow dome. The northeast side of the glacier was flat enough to plunge-step and boot-ski partway, before crossing the rocks at its edge. Now that I knew the route, the return to Access Creek was efficient, but still took quite a bit of time. Anticipating vicious insects and brush below, I put my pant legs back on before descending to the creek, putting up with sweaty legs.

The correct route above the creek crossing was mostly pleasant, with a decent path beaten through a thin strip of berries and alder. At a wider strip of brush near 4000′, where the woods are close to the north side of the creek, the current route crosses to dive into the relatively open woods. I tried to cross on some logs instead of just fording, and was rewarded with both wet feet and a bashed hand when I slipped. The best route stays in open woods somewhat near the creek higher up, then strays farther away onto an indistinct ridge as the creek steepens and turns north. I had to contend with some vicious blueberries when I lost it in a couple of places, but still made pretty good time down to the Big Beaver. Here you stay left above the swamp, then reach the stream junction mostly in blueberries. 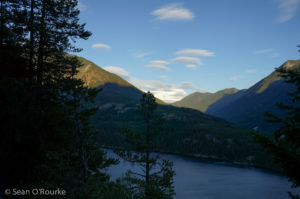 I recognized the series of logs I had used the previous year, but one was either submerged or gone. Fortunately there is a reasonable ford immediately upstream. After a bit of devil’s club and other misery, I lucked into the correct path into the woods, and was back to the trail much sooner than expected. Only 17 miles to home!

The bugs were out in full force, and I was completely swarmed by flies in the brief time it took to remove my pant legs for the hobble/jog. I ran a few miles to a place that seemed less buggy, then stopped to quickly wring out my socks before trudging on. The final stretch from Big Beaver to Ross Dam was as miserable as last time, though at least it was still light. My hand ached, my back was sore where my (unused) crampons had been poking it through my pack, and my feet, which had been damp or wet most of the day, were working on blisters. I crept up the spiteful climb from the dam to the trailhead, humbled by the unexpected difficulty of my larger plan (not this year…), but pleased to have dayhiked one of the most remote peaks in the lower 48.

Luna from the wrong place

Slog up to Luna-MacMillan saddle