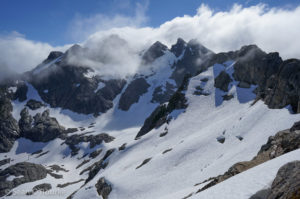 Three Fingers is home to perhaps the most impressive surviving fire lookout in the United States. Its construction required blasting the top off the mountain, blasting a trail, and constructing a temporary tram to move building materials up the final cliffs. Reaching it requires crossing a bit of the Queest Alb glacier, then climbing three wooden ladders to the summit pinnacle; the trail below can be covered by steep snowfields well into July. The Forest Service was planning to burn the lookout down to avoid liability, but a group of volunteers offered to maintain it, and it is now open to the public as a sort-of museum and also a place for up to two people to sleep.

After hanging out with Luke in Edmonds, I drove up the Mountain Loop, found the subtly-signed Green Mountain road, and drove about 8 potholed miles to what I thought was the road closure, where I crashed next to a couple of other cars. According to the National Forest website, the road was washed out just beyond this point, leaving about 10 miles of road to bike or run to reach the old trailhead. I set my alarm to make sure I had time for the anticipated road misery, then gave in to my accumulated fatigue.

In the morning, I saw that the boulders blocking the bridge had been partly removed, and both the bridge and the road beyond seemed to be in good shape. As Frank Underwood said, “There are two kinds of pain. The sort of pain that makes you strong, or useless pain. The sort of pain that’s only suffering. I have no patience for useless things.” Running a perfectly drivable road is the epitome of useless pain, and there was no “road closed” sign, so I happily drove another 7-8 miles to an actual washout much closer to the trail. While I was too cautious to even attempt to drive through, an overzealous couple had apparently tried the night before, and were now camping in their high-centered vehicle in the rut. I established that they had food and water, and that there was no way I could pull them out with my car, then said I’d be back in the afternoon and took off up the road at a fast walk. 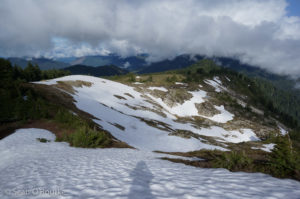 About a half-hour later — much sooner than I had expected — I was at the old trailhead, where the stream/trail leaves the excellent road to climb gradually east and north. The trail was fairly standard Cascades fare, with slick roots and wet brush, but fewer uncut blowdowns than one would expect on a trail so far from vehicular access. I reached the Meadow Mountain trail junction without incident, catching occasional glimpses of Three Fingers in clearings. Above this, a large tree has exploded all over the trail and hidden it for 50 yards, but the route is otherwise easy to follow, and I was soon at the Goat Flats camping area, where I saw two tents and one camper heading toward a supposed outhouse. 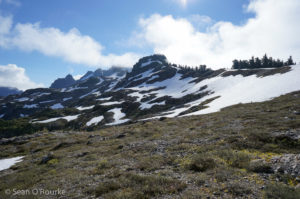 Above the camping area, the trail follows the ridge a short ways, then ducks sneakily into the woods on the south side to traverse around the rocky, serrated ridge. I unfortunately was not paying enough attention, and instead took a likely-seeming goat-path up the ridge and around its north side. This involved some steep snow, third class rock, and one armpit-deep fall through into a moat. Fortunately humans are designed so their arms naturally catch them when this happens, so there was no damage. I eventually realized that the goats had a different goal than I did, scrambled to a gap on the ridge, and descended a loose chute back to the old boot-pack on the south side. 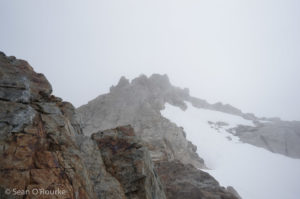 The trail became unavoidably treacherous near the final notch, where it crosses a steep northeast slope. It looked like there might have been some built-up retaining walls back in the day, and the lookouts probably shoveled this section, but it was now a steep snow-slope with a bad runout. I picked my way across, downclimbed some 4th class rock past an old fixed line, and regained the trail where it crosses back south to easy terrain. More easy switchbacks led up into the clouds. 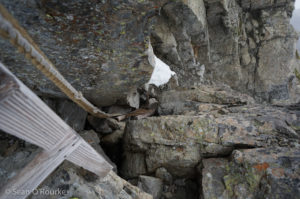 I almost did not find the summit, as there are several sub-fingers of the south Finger, the lookout is nearly hidden from below, and I could not quite see the tops of the sub-fingers from the snow below. I eventually climbed one pillar, waited for a partial clearing, and spied the lookout back to my south. I was tempted to free-climb the summit without using the ladders, but they were in the way of the best route and the rock was wet, so I clambered carefully up two old wooden ladders, made a couple scrambling moves, then climbed up the third to top out on the sloping slab “front porch,” where a massive gym-class rope led to near the front door. 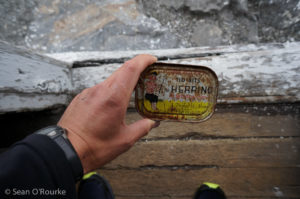 The building and its contents seemed to be in reasonable shape, especially considering its winter conditions. I checked out the contents for awhile, resisted my urge to eat the old canned fish (I was out of food), then made my way back. I passed one man hiking in, like me was surprised at the “open” road, who informed me that the poor couple was still stuck. The clouds stayed where they were, a few hundred feet below the peaks, so there was not much to see on the hungry jog back to the car.

I offered the couple a ride into town, but they preferred to wait for a tow, so I took their information and headed into Granite Falls to find the nearest towing company. Unfortunately someone else had come before me, the authorities had been made aware of the unfortunate situation, and they were not pleased, as the road had seemingly been “opened” by some locals with a winch. I probably missed an unpleasant encounter with The Law by about an hour, while the others at the “upper trailhead” probably got a dose of blue fury and unjust but non-disputable fines. So… I lucked out and got that done without road-running. Unfortunately, the rest of you will have to park lower down.