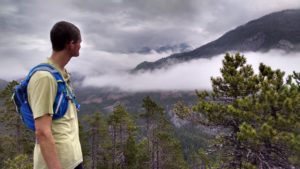 [All photos by Renée.]

With the snowpack and my own motivation not quite in condition for Serious Business in the Cascades, I took advantage of an opportunity to both climb and interact with civilization up in Squamish, where Renée and a couple of her friends were doing things with ropes and gear. In addition to getting in some roped climbing practice, I hoped to tag a couple of local peaks. After another typically unpleasant encounter with a Canadian border guard, I pulled into the Stawamus Chief parking lot early enough to chat with Renée and MJ before it got dark, and easily found parking in the “day use” lot on a weekday. I had been worried about being deported or sent to the Snow Mexican juzgado for sleeping there, but plenty of other climbers were already blatantly camped, so I figured I would have time to make a getaway if things turned bad. 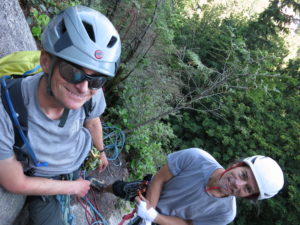 First up was Calculus Crack (direct 5.9 start), a 5-ish pitch route on the Apron. After waiting for a couple of groups ahead of us, MJ led the first pitch, up a corner and out above the forest canopy. While it did not look too steep, the rock was much slicker than at Index, and I embarassingly could hardly follow the pitch. I was almost discouraged enough to be lowered off and walk home, but the rest was only 5.8, and was supposedly more sticky where the rock received more sun. 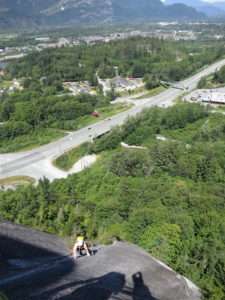 Climbing as a team of three on two ropes was a bit of a nuisance, but we were fast enough to have to wait again at the top of the second pitch. The rest of the climb was less slick and easy enough for me to actually enjoy it. The “top” was actually an exit ledge partway up the huge face, and walls beckoned above and to either side. I am not a climber, but I understood why people spend weeks camped at the base, following different paths up this maze of routes.

With the two waits, we did not have enough time to do another long route, so we instead headed over to Smoke Bluffs, a forest maze surrounding single-pitch crags facing different directions and with different levels of tree-cover. With this variety, it would be possible to find comfortable temperatures at most times during the climbing season, and the approach trails were well-maintained and -signed enough not to confuse a newcomer. I followed a fun and sometimes painful 5.9 hand-crack, then we all retreated to the friends’ house for fancy dinner. This mode of existence was neither temperamentally nor financially sustainable for me, but I could put up with it for a couple of days. 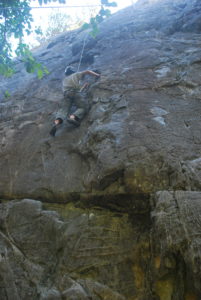 The next day we headed up to Cheakamus Canyon for some bolted face climbs with great views of the Tantalus range. I much preferred this area, with face climbing on predictably sticky rock on which routes I could actually climb were steep enough for falling not to hurt. I managed to lead a few things, and toproped some 5.10s less embarrassingly than I had feared. Still, by the end of the day a mixture of failure and lack of sleep had reduced my desire to crag; it was time for more typical activities.

After another late night, it was off to do some hill-running. Renée and I started with a sort-of loop over the Chief’s three summits, leading through hordes of tourists on some familiar and more unfamiliar trail. The “climber’s route” off the back of the first summit, with its hand-chain and rebar ladders, is easy to miss from the top, but well worth finding. The route is too steep to involve much running, but I didn’t mind saving my knees.

I had lunch in the climbers’ lot, then caught up on sleep for a couple of hours in the back of my car before heading over to the tram to run the Sea to Sky trail. There had been a race the previous weekend, and I wanted to see how close I could come to the winning time. At about 3600 ft/hr, it looked approachable on paper: I had managed similar speeds around Jackson, even when not fully rested. However, the actual trail had numerous flat sections and downhills, several of which were rooty and technical. The course record was actually set by someone capable of near-world-class ascent rates, and I did about how I should have expected: 25% off the CR at 57 minutes bottom-to-top. Hills don’t lie.

This entry was posted in Canada, Climbing, Tourism. Bookmark the permalink.