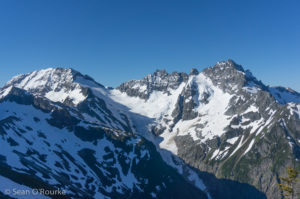 The lousy weather was finally passing, so I did the Lookout Mountain lookout on a cloudy afternoon before driving up to Cascade Pass to do some real peaks. Notes to others: (1) Lookout Mountain is a good workout hike, with 4400 feet of steady, moderately steep gain, and the lookout is in good condition and open to campers on a first-come, first-served basis. (2) There are stinging nettles on the approach, a seeming rarity in the Cascades.

Anyways, I was far from the only one bivying in the Cascade Pass lot, so I watched the others gather pickets, helmets, and similar superfluous things as I ate, then shouldered my daypack and ground out the miserable flat switchbacks to Cascade Pass (its 9% average grade is suitable for a road, not a footpath). At the pass, I turned right to follow the well-trodden path to Cache Col, at the northern end of the popular Ptarmigan Traverse. I had gone this way the year before to tag Magic and Mix-up, and a fresh bootpack made it easy even without crampons. This time, I hoped to follow it farther to tag Spider and Formidable, two 8000-foot peaks. As a bonus, this would give me a view of the remainder of the Traverse south to Dome, giving me first-hand knowledge of a relatively unfamiliar part of the range. 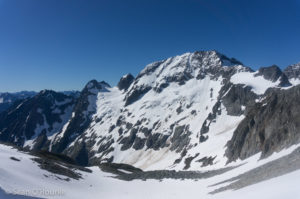 I passed a tent at Kool-aid Lake, then continued along the bootpack to a northwest-southeast col. This did not seem quite right, but without Beckey’s description of the Traverse (I had only route descriptions from Spider-Formidable Col onward), I decided to follow along. As I descended from the col toward Spider’s north face, I eyed the ridge to my right for a potential crossing point back to where I expected to be. Partway down, I met a man coming the opposite direction, who said he and his partner had just made a possible first ascent of something near Glory or Trapper. Once I had established the fact that I was some kind of off-route idiot, I returned to the col and got onto what I thought was a reasonable line toward the Middle Cascade Glacier. 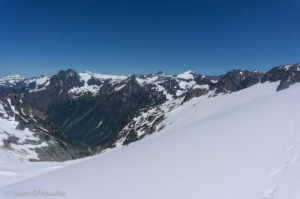 Not finding any helpful tracks or trail, I traversed around Art’s Knoll on a long, dirty ledge above the official “Red Ledge” (which I found retrospectively on my way back), then crossed a mixture of heather and snow to the Middle Cascade Glacier. The obvious crevasse-free route stays left. Unfortunately, the snow was mostly a breakable rain crust over ankle- to calf-deep slush, so I had plenty of time to think as I slogged to the Spider-Formidable saddle. 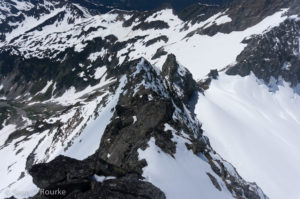 The standard route on Formidable starts south of the col on a (now snowy) bench, then does something complicated. I was too postholed-out to contemplate this, or the equivalent southern route on Spider, but Spider’s west ridge was right along my return path, so I decided to salvage the day by doing that. Angling to the upper right corner of the glacier, I briefly put on crampons to climb a steep, narrow, shaded snow tongue, gaining the ridge just east of a striking choss-fin. Beckey describes this route as a sketchy choss-fest (or maybe, in his parlance, a “dioritic schist-heap”), and it was certainly that: a sometimes-narrow fin of friable rock cemented together with mud. The patchy snow, obnoxious on the glacier below, was a welcome relief. The ridge from the west to the true summit was similarly wretched. I’ve climbed worse choss — nearby Boston comes to mind — but not often. 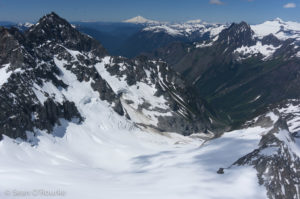 Reaching the rarely-visited summit, I found a nice old register cataloguing reviews of various routes over the decades. Other than some praise for a north-facing snow climb, most could be summarized as “sucked.” After delaying the inevitable as long as possible, I retraced my steps to the glacier, then minimized the postholing by linking some sitting glissades. I waved at a party coming back from Formidable, but for some reason did not stop to chat. Instead I headed back via a slightly different line, which turned out about the same as on the way out, narrowly missing the “Red Ledge” when I downclimbed out of it partway through (it dips, then jogs back up). Finding better snow north of Cache Col, I quickly boot-skied and jogged back to the car, thankful to be done with the Cascade Pass trail for the season.

My neighbor in the parking lot turned out to be a distance runner who was just getting into the mountains — my target audience! She seemed friendly and enthusiastic, so I gave her a few pointers on where to go next, and tried to encourage her in a fast-and-light direction. I had seen too many big boots and snow pickets on the trail, and it would be a shame for her to come to believe that, in the mountains, “slow and heavy wins the race.” Then it was time to consume a pot of nutrient glop and move on to the next.

Dome and Spire from Spider-Formidable Col

Glacier and (barely) Rainier from Spider

Not many people bother with this one

True summit from west one