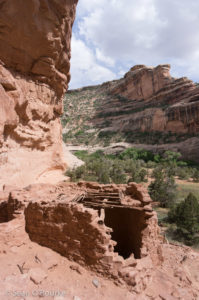 I am not usually much of a desert or ruins person. However, both are necessary parts of any visit to the southwest, and I found them much more tolerable when combined with a trail run. Renée had picked out a path through Grand Gulch going in Bullet and out Todie Canyons, which she claimed was “about 16 miles of mostly runnable trail” (it actually turned out to be 25-ish miles with plenty of bushwhacking and sand-slogging). The route would visit 10 or so ruins and pictographs of various shapes and sizes. 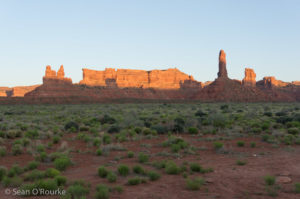 We lazed around our campsite in Valley of the Gods — the BLM version of Monument Valley — then drove up the improbable Moki Dugway and through a herd of cattle, set up the car shuttle, and got started running around mid-morning. The trail down Bullet Canyon was well-used and clear, and we passed a few backpackers heading out as we descended. At the first major ruin area, we wasted a bunch of time trying to find a “perfect kiva” before giving up and visiting the more obvious cliff-dwelling guarded by a weird ghost-face. Like many of the other dwellings we visited, it consisted of a well-built lower layer of living quarters, and a more primitive upper one, used perhaps for storage or defense. Sheltered by the overhanging canyon wall, and preserved in the desert air, the buildings’ stick-and-mud construction had survived six centuries surprisingly well. 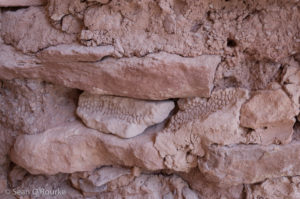 After passing a granary helpfully labeled with a corn impression, we blew right past the intersection with Grand Gulch, hidden in a mass of cottonwoods, greenery, and use trails leading to campsites. We went most of a mile downstream before realizing our error, but I did not mind at the time, since I was still feeling fresh, and I got to catch a young bullsnake along the way. Returning to the junction, we found that the trail up the Gulch was not nearly as running-friendly as the one down Bullet Canyon. It alternated between bush-whacking through the overgrown sides and following the dry, sandy wash. Neither was particularly fast, and we alternated between abusing our shins on the brush and slogging along in the soft sand. 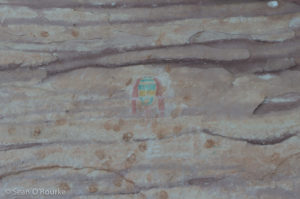 Much canyon later, we found a bit of flagging and followed the short detour leading to the Green Mask Ruin. There we found a couple of backpackers relaxing in the shade, perhaps refilling their water from the supposed spring farther up. Parts of the cave roof had collapsed, destroying most of the structures, but this ruin had the most impressive petroglyphs, from several periods of occupation, including the eponymous green mask. It also had an ammo can with a short history lesson and a summit register, which I dutifully signed. 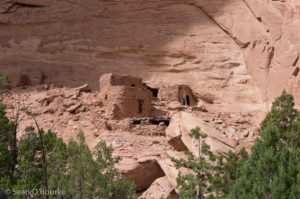 Back in the main draw, we passed a few more ruins, but having become either “ruin snobs” or too hot and tired, we only visited the ones closest to the trail. However the last major site, the Split Level Ruin, was worth taking some time to appreciate (it also had the all-important summit register). Though not as sheltered as the first ruin in Bullet Canyon, it was still in good shape, with substantial portions of the buildings’ roofs intact. We tiptoed around the town dump (useful to archaeologists), and peered into the various structures, then picked grass seeds from our socks and went into “let’s get this over with” mode for the slog up to and out Todie Canyon. After a brief scramble near the canyon rim, we had only a final bit of blessedly non-brushy desert slogging to reach my car. There I sensibly sat in the shade and drank water, while Renée performed some kind of stretching ritual. After a fancy dinner at the Bullet trailhead, we made late-night drive back through the cattle and down the Dugway to find the closest reasonable camping in Valley of the Gods and think of easier things to do on the morrow.

Valley of the Gods