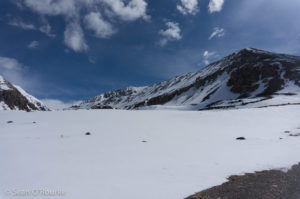 After two fairly long days, I burned a good weather day on a short, easy peak to give myself time to catch up and dry out. This was probably a mistake, as it may have been the last good weather I will see for awhile. Dyer is a classic Leadville-adjacent peak, with a standard route that passes a mine tailings pond, then follows one of the high-voltage power lines leading to the rich, ski-resort-heavy eastern side of the Tenmile Range. While somewhat contrived, the west ridge route turns Dyer into a fun third class scramble. 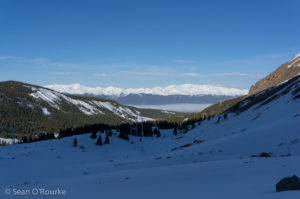 I parked less than a half-mile past where the approach road turns to dirt, and booted my way on to where the standard and west ridge routes diverge. After the previous day’s miserable snow, I was surprised to find snowshoes unnecessary not only on the road, which sees a fair amount of snowmobile traffic, but even going cross-country to the saddle between Dyer and West Dyer. 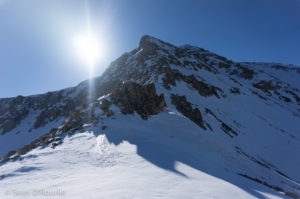 After a bit of obnoxious broken terrain, the ridge turns into an enjoyable class 3 scramble. While it may be possible to “cheat” on the south side, the north side of the ridge is mostly vertical. Staying near the ridge crest, I found some loose blocks, but mostly solid rock, mixed with snow that was mostly wind-packed on the south side and frustrating otherwise. There were some bits of exposed traversing near the top, which may not be an issue in summer conditions. 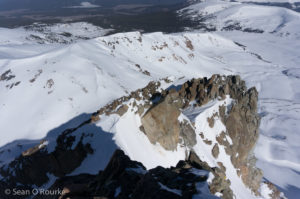 The route’s main downside is that it leaves you several false summits away from the true one. However, that is a small price to pay to avoid the standard “brain cancer” route, which follows a high-voltage power line for awhile before ascending gentle snow (or talus). I made a loop of it, returning via the standard route to reach the car well before lunch.

Pool of fog over South Park