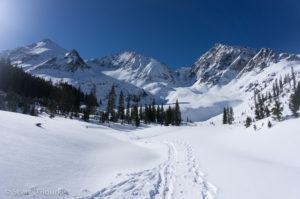 Apostles from the north

Ice and the other Apostles are a strikingly rugged sight in a range composed mostly of giant, placid ant-hills. Ice Mountain is unique among major Sawatch peaks for having no route easier than class 3. I was torn between traversing all three Apostles (North Apostle, Ice, and West Apostle), and doing the Refrigerator Couloir on Ice, the center Apostle. I had naively hoped to do both — climb the Fridge, hop over to North Apostle, then back across to West — but ended up skipping West Apostle on a challenging day. 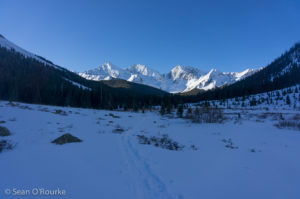 First view from the approach

I got started a bit before 6:30 near the lower Huron trailhead, as the road was still blocked by snowdrifts. The cold night had hardened the snow enough that I did not need snowshoes until after entering the Refrigerator Couloir, over three hours into the day. This surprised me, as there had been a late-season snowstorm only two days before, and I have suffered the hellish slush-bog of a Sawatch melt in years past. 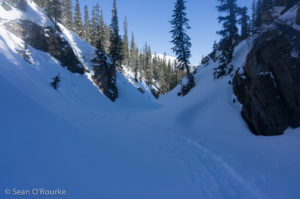 Thanks to the party who I had met the day before, I had a fresh, fat snowshoe track to follow, and therefore had easy going and no route-finding trouble between the end of the road and the base of the couloir. While the summer route evidently follows the right side of the creek leading out of the Apostle cirque, there was enough snow to simple boot along the creek itself as it winds through its narrow slot. 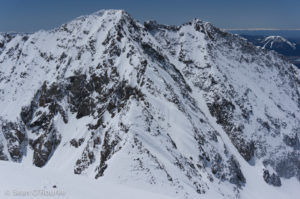 The Refrigerator is hidden as one approaches the peaks, but fortunately I could simply follow the track as it climbed through a steep slot toward the base of North Apostle. Entering the couloir, the friendly snow turned to heavy powder a foot or more deep with a thin, breakable crust. Even following the previous day’s track was a grim wallow: I put on my snowshoes, then duck-walked up the least-bad line, usually managing not to slide backward. It was brutal work, and I was conscious that once the sun warmed the upper couloir there was a decent chance of a wet slide. 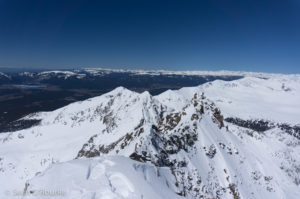 Perhaps 100 feet from the top, the previous day’s party had given up. I tried exiting left onto rock, but found nothing I particularly wanted to climb, so I returned to the main couloir to brute-force my way to the ridge. Things definitely became sketchy as the couloir steepened: the new snow would no longer support my snowshoes, so I had to kick each step a half-dozen times to burrow down to the pre-storm layer. While I did not manage to kick off a wet slide, it certainly felt like I could have. The cornice presented a final obstacle. Stomping down a solid platform near the left side, I chopped and burrowed at the top until, after a couple tries, I managed to “beached whale” onto the ridge and writhe to security. 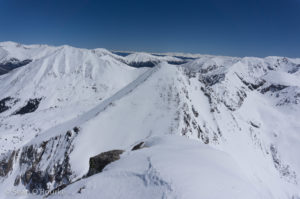 Looking around, I saw a cool balanced block to the west, and the summit a short distance to the east. I carefully snowshoed straight up the ridge, headed south to what might have been a slightly higher point, then returned to the junction of ridges leading to the Apostles. Traversing to both Apostles was clearly out of the question, as the west ridge was long and involved in fresh snow, and the north was steep enough to be invisible from the summit. Not wanting to descend the warming couloir, I decided to try the ridge to North Apostle. 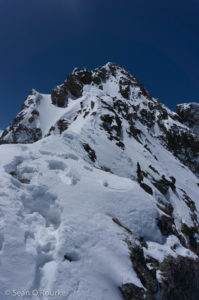 Switching to boots and ice axe, I peered over the edge, and saw a complicated-looking ridge with a sheer east side and ribs extending west. I was surprised and relieved to discover that even the steep snow on the ridge was nicely consolidated. Using a mixture of the ridge crest and the left (west) side, I carefully picked my way toward the saddle. This involved cleaning off snowy 4th class rock to find footholds, and plunging my axe for (psychological?) protection while downclimbing steep snow. It felt good to do something like “real mountaineering” for the first time in awhile. 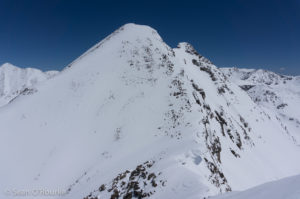 From the saddle, North Apostle is straightforward class 2, so it was all over except the slogging. I tagged the summit, admiring views of neighboring Ice and Huron, then awkwardly snowshoed down to rejoin the path. The snow had softened enough to require snowshoes, but had not turned to Sawatch hell-slush, so I made it back without straining myself in about 8h30 for one of the better days I’m likely to have this month.

First view from the approach

Apostles from the north

Approach from base of couloir

Ice and West from North Apostle