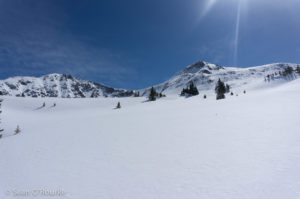 After a wretched slog up and down Hope Mountain in a white-out, and a forced rest day when I woke to snow and sleet at 10,000′, I was finally granted a few days’ good weather. The first order of business was Emerald Peak, a typical Sawatch rubble-mound near Missouri Basin. The most direct approach is via the seldom-used road to Clohesy Lake. Having been turned around by epic high water in Clear Creek when I last wanted to use the approach in 2010, I looked forward to exploring this valley between Huron and Missouri. I was not disappointed: the rugged side of Huron and its neighbors to the north is far more scenic than the rolling terrain in Missouri Basin. 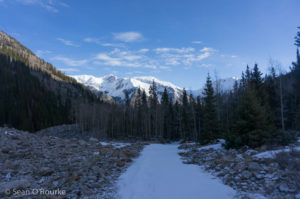 I forded the first two of three branches of Clear Creek in my car, then rock-hopped across the last in the morning, hiking the rocky and soon snow-covered 4WD road to its end just before the lake. Clohesy Lake was just starting to emerge from the snow, but the snow above was deep and consolidated enough that I could tromp straight over the willows, swamp, and stream in the bottom of the valley rather than hunt for the supposed trail in the woods. 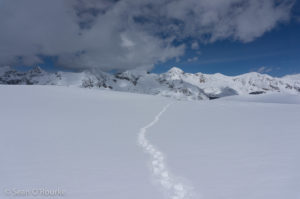 After heading south along the valley bottom for awhile, I arbitrarily decided to head straight up through the woods to the east, emerging nearly dead-east of Emerald’s summit. As I climbed toward the plain to its southwest, the impressive Apostles emerged above the valley rim behind me. With the fresh snow, a direct attack on Emerald would be frustrating, so I looped south, passing near the ruins of an old building before making my way up the gentler south ridge to the summit. 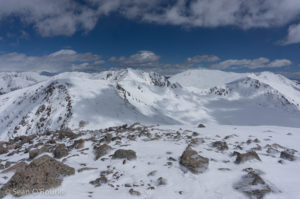 The weather was starting to deteriorate, with clouds to the southwest and a strong wind driving me on toward Iowa after only a brief stop. Iowa has just enough prominence from nearby Missouri to count as a peak, and does not rank among Colorado’s highest 100, but it was more or less in the way of my getting home, so I tagged it, looked at the frozen-shut summit register, then dropped down its west ridge until I could slide, plunge-step, and glissade back to Clohesy Lake. Despite the oncoming clouds, the day had warmed enough to soften the snow and make it much less cooperative than in the morning.

After a post-hike meal, I headed up-creek to the ghost town of Winfield and the trailhead for my main objective in the area, the Apostles. Having had the mountains to myself for awhile, I was surprised to find a group of four having just attempted what I planned to do the next day. They had found thigh-deep wallowing in the couloir (which sounded like an avalanche risk to me), and turned around short of the summit, two of them having a good ski while the others snowshoed home. I thanked them for plowing a trench, then turned in to read for awhile.

Apostles (l) and Huron (r) from near Emerald