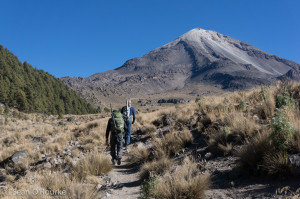 At 18,490′, Pico de Orizaba (or Citlatépetl, “Star Mountain”) is North America’s third highest peak, behind Denali and Logan. Its north side is home to Mexico’s largest glacier, extending from near the summit to around 16,000′, though most of its aspects are entirely unglaciated. Because it is a volcano, i.e. a giant pile of loose sand and terrible rock, the standard route takes advantage of the glacier, approaching from the north via a purportedly rough road to a hut above 14,000′. However, the peak can also be approached from the south, where a radio telescope on neighboring Sierra Negra ensures that a road to the 13,100′ saddle between the two peaks is reasonably maintained (and hosts a webcam). Since our rental car would take us higher on the south side, and hiring a 4WD is expensive, we opted for the Ruta Sur. Though it is the expected loose slog on the way up, I highly recommend this route for the nice camping near the trailhead and epic scree-ing on the descent. 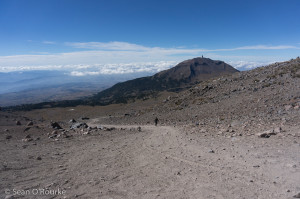 After the last night’s adventures, we got a lazy start from Ciudad Serdán, despite having a potentially long morning drive to the south side of Orizaba. This being our biggest day in terms of gain (5,300′) and peak elevation (18,490′), I was antsy to start early; in retrospect, there was no reason to do so, and we probably should have slept in. In any case, after retracing our route a short ways, we turned off on a side road through Atzitzintla and Texmalaquilla, which ultimately leads to the radio telescope. Our outdated guidebook said the road was steep dirt, but it is now semi-paved to the saddle, and passable for any passenger car with enough power or a low enough gear. Beyond the saddle, the road remains passable for another half-mile or so to a well-used trailhead and camping area. It quickly goes to hell after that, though a high-clearance 4WD with a granny gear can reach just over 15,000′, making this perhaps the highest road in North America. 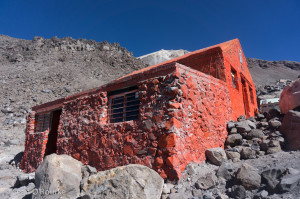 After picking out a random selection of gear, we started hiking around 9:30. I brought crampons (useless), a down jacket and mitts (nice, but not necessary), and about two liters of water, but left my ice axe behind. In retrospect, the peak could be done for speed with a single bottle, a handful of gels, hat and gloves, and a windbreaker. Starting at such a “low” elevation, we climbed about 1,000′ before reaching tree line, and grass and flowers extended to nearly 15,000′. The 4WD road switchbacks steeply to just below the orange-painted Fausto Gonzales hut near 15,500′, while a steeper climbers’ trail cuts directly across most of the bends. We met a fair number of people on this stretch headed in both directions, and two SUVs more competent than ours. 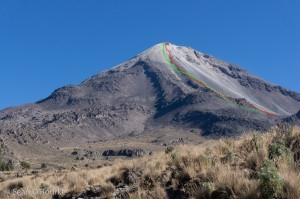 Unlike the Los Cien hut on Iztaccíhuatl, the Fausto Gonzales is sort of a dump, with a bare, dirty concrete floor and two utterly repulsive outhouses in back. After dithering around for a few minutes, we started up the long gully leading to the summit. There are three possible routes: a ridge of rocky outcroppings to the left, loose sand on either side of the gully, or talus in its center. The best upward route would probably be the ridge, but the talus was stable lower down and closer to the climbers’ trail, so I chose that, and the others followed. 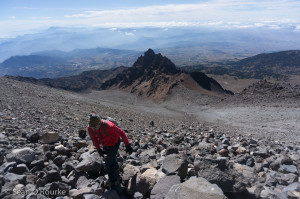 I felt slightly faster than the day before at the same elevation, feeling the noticeable slowdown closer to 16,000′, but this part was a pure cardiovascular test, so I was in complete coma drive keeping up with Mike. The talus became less stable as the gully steepened higher up, and eventually I decided to cut over to the ridge. After a short but extremely unpleasant crossing of the sandy slope — thrashing at a 45 degree angle to move straight across — I reached the ridge and found much easier going that allowed me to gap Mike, who stayed on the talus for awhile. I also found plenty of bootprints and, as is depressingly common in Mexico, bits of trash. 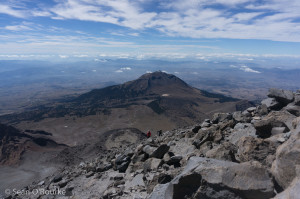 Unlike the past two days, there was a strong west wind, which encouraged me to stay on the protected right-hand side of the ridge. Passing through 17,000′, I felt no effects of altitude other than the expected slowness. However Mike was apparently feeling light-headed when he stopped, and Cameron appeared to be suffering a bit. I found a sheltered nook and put on my shell and mitts to wait for them, then continued climbing. 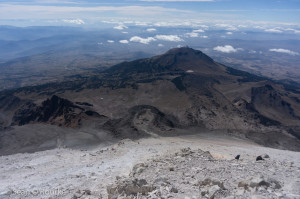 The convenient ridge disappears below a white rock outcrop known as “the pulpit,” and the steep, loose slope above is both frustrating and dangerous. Moving from rock to rock up the sand-slope, I broke off a decent-sized outcropping, which broke into several pieces and sped down toward the others below. I yelled “rock!” (less colorful than the Mexican equivalent, “aguas!”, a warning from former times of incoming night-soil), though I am not sure they could hear me over the wind. Fortunately no one was hurt, and I continued somewhat more cautiously and less selfishly. 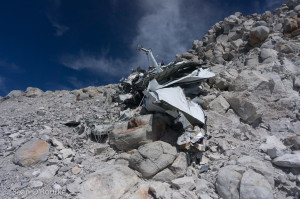 The rock becomes somewhat more solid at the pulpit, and a bizarre plane wreck also provides good holds. Topping out on this section, I got my first views of both the crater and the summit cross. I slogged up the much easier final slope, then did the traditional jog up the last 10 yards to tag the cross, reaching it just as oxygen debt caught up with me. I had expected to find crowds of Americans on the summit, arriving via the standard northern route, but found only a single woman from Guatemala. Using the cross as a windbreak, we shared Coke and Mexican Cheetos, and I learned that she was quite the mountaineer. In addition to four times up Orizaba, she had made three attempts at Everest, reaching 25,000′ once and witnessing this year’s devastating avalanche on the latest. 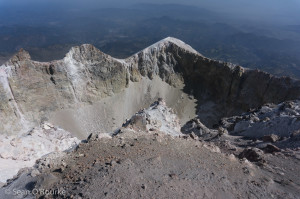 While there are good views from the summit west to Popo, Izta, and La Malinche, the eye is drawn east to the abyss of Orizaba’s crater. 1,500′ wide, it plunges vertically on all sides in rotten and rime-covered cliffs to an invisible floor 1,000′ below. I am sure someone has been inside, but it would take a long rope to get down, ascenders to get back out, and some creativity to make an anchor on the sandy rim. I stepped as far as I dared down the loose slope on its edge to take some photos, then retreated a bit to sit out of the wind and wait for the others. It was chilly even out of the wind, and I would have been uncomfortable sitting still without my puffy. As the others had not brought down jackets, we did not stay long after they arrived. 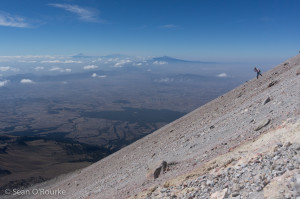 Retracing our steps would have been slow, and would have subjected other climbers to a hail of rockfall. Instead, we headed into the next gully west of the ridge, where we enjoyed epic scree-ing in the sandy equivalent of untracked powder down to about 17,000′. Here we crossed back over to the ascent gully, where further sand took us within a short hike of the hut. Including stops, I averaged about 100 vertical feet per minute descending from the summit to 16,000′. This is why the south route beats the north, despite the slog on the way up. 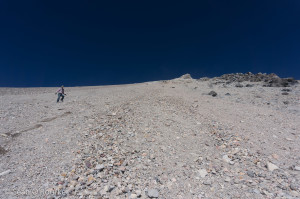 I chatted with a guide and his client as I emptied my shoes and waited for the others, then we all continued to the car at a comfortable walk, jogging a few sections of the road for variety. We passed a variety of people on the way down, from mountaineers with camping gear to locals out for a hike, but no fellow gringos.

It was only early afternoon, but we were all feeling worked after three busy days, so after hanging out for awhile at the trailhead, we drove only as far as the town of Orizaba before finding a hotel and some terrible (but cheap!) pizza. The road from the Mexican Altiplano down to the town at 4,000′ was spectacular, passing through several tunnels as it wound its way down the side of a lush, steep-sided valley from which Orizaba would occasionally show itself far above. Having avoided injury so far, I let my guard down in the hotel and cut my big toe exiting the bathroom, leaving blood all over the floor. As John Muir said, “few places in this world are more dangerous than home. Fear not, therefore, to try the mountain-passes.”

One of many crosses