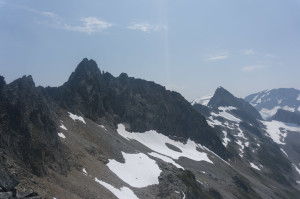 As a warm-up after what turned out to be some poorly-timed rest, I did an easy hike up to Cascade Pass and on to Magic and Hurry-up, two peaks on the start of the popular Ptarmigan Traverse. While I needed a bit of time to psych myself up for another shot at the Pickets, I took one day too many and ran into the first rain in the Cascades in a month. Washington and British Columbia will certainly benefit, and I wouldn’t mind less smoke and fire, but I am still not water-resistant enough to force myself to do long days in the wet. 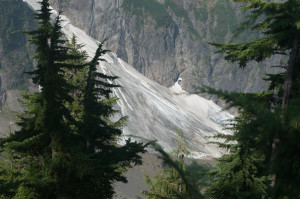 Pulling into the parking lot, it was immediately apparent just how dry things are this year. The snow bridge below Johannesburg was long gone, and the lower end of the Sill Glacier was all bare glacial ice with wide, ugly cracks that were not at all visible late last July. The direct descent from Cascade-Johannesburg Col, already tricky last year, would now be a nightmare. 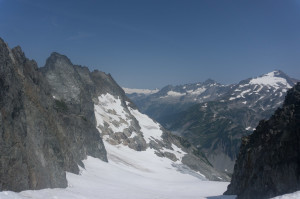 Toodling up the trail, I passed some day-hikers and heavily-laden climbers on the way to the pass, then followed the restroom sign to the start of the Ptarmigan Traverse. I saw no evidence of a current or former pit toilet; maybe the sign is just there to discourage hikers from following the well-traveled but still unofficial trail. After a somewhat tricky crossing of a bare dirt ravine, I reached the foot of the Cache Glacier. Despite having neither axe nor crampons, the climb to Cache Col went easily on the soft and low-angle snow. 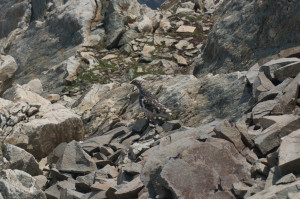 From the col, the Ptarmigan trail descends through heather and talus to a small tarn known as “Kool-aid Lake.” Beckey’s route description for Magic Peak starts from the tarn, but I figured I would save myself some up-and-down by traversing along the ridge. This initially went well, as I followed a goat- or use-trail through a large camping spot and along or near the crest of the ridge. However, as I neared the peak, the ridge grew more jagged and the trail disappeared. For the final section, I ended up traversing a loose talus-bowl below the ridge, then taking a narrow 4th class ledge around to join the standard southwest route to the summit. I passed some old bits of rope on the ledge, suggesting that someone else had made the same mistake some decades ago. 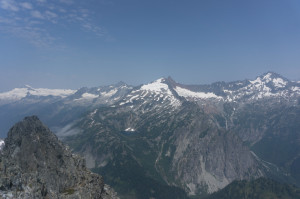 Relaxing on the summit, I admired the view of the larger peaks from Eldorado to Buckner across the way, and watched the clouds stream in from the valleys to the north and west. Though rain seemed unlikely nearby, there were thunderstorms building to the east, and the hot, dry spell was clearly ending. Leaving the summit, I made an easy traverse over to the base of Hurry-up, climbed onto its west face, and hiked up steep grass and heather to the summit. On the other side, the S Glacier drops from nearly the summit toward Trapper Lake, above the Stehekin River. Amazingly, the old Stehekin road used to be drivable all the way to below the lake, only a few miles east of Cascade Pass, with daily bus service in the summer. 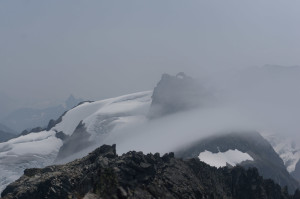 After descending the west face, I again tried to save elevation by traversing high above the Ptarmigan trail, but eventually realized this was a wasted effort, and joined it a short ways north of Kool-aid Lake. From here, it was a pleasant walk back to the car, and I arrived fresh enough to do something bigger the next day. Unfortunately the forecast did not lie, so I would be killing time between rain showers for a bit.

Johannesburg from near Cascade Pass