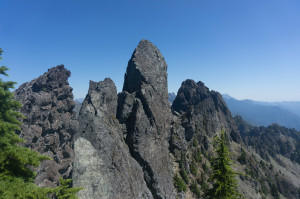 After a day off to recover from self-destructive activities, I headed over to the other side of the Olympic Peninsula for a bit of more standard peak-bagging, killing time during the northwest heat wave somewhere slightly cooler than the Cascades. While not one of the higher Olympic peaks, Cruiser is interesting for having a 5th-class-only summit. Most of the “climb” is a long walk up a trail through the woods, then a shorter but interminable talus-slog; however, the final ridge scramble and climb up the summit blob is enjoyable, and some nearby spires look interesting as well. The “pillow basalt” rock generates horrid scree piles, but is surprisingly solid. 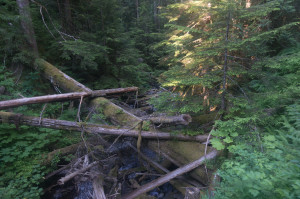 I drove to the popular Staircase trailhead fairly early, getting a reasonably cool start for the standard Olympics approach: 4 miles along a river, then 4 miles and 3-4,000 feet up and out of the rain forest to a popular camping lake. This time, the destination was Flapjack Lake. I passed a few lake campers on the climb, but mostly had the green tunnel to myself. My earbuds were down to one ear, which is intolerable for listening to music, but okay for spoken podcasts, of which I still had a decent backlog. 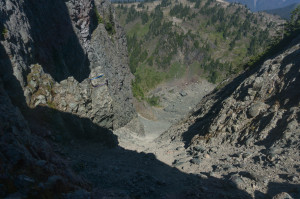 Passing the lake, I continued toward Gladys Divide, emerging from the trees to be immediately smothered in muggy heat. Nearing the pass, I looked darkly at the dismal scree-chute to the right, then psyched myself up for a couple of minutes in the shade before doing battle. The couloir is normally snow-filled, but at mid-summer in a very dry year it is the expected mix of hard-pack and horribly-loose scree. The rock is hard, but has formed irregular round-ish debris that resists becoming stable. I escaped the worst up the class 3-4 left-hand wall, finding a rappel sling and even a bolt as evidence of others’ desperation. 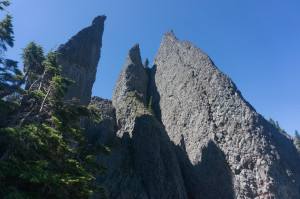 At the saddle, I saw three attractive-looking spires to the right, one with slings around its summit, and a rounded mass to the left, where Cruiser presumably lay. Following the theme, I assume that climber-bros have named the three spires “Bomber,” “Splitter,” and “Sinker” (thanks to Gina for that last one, which I had never heard). Scrambling up to the left, I found a mother goat and her kid occupying the highpoint, seemingly unwilling to get out of my way. Fortunately I did not need to reach this highpoint, so I traversed around to their left, where Cruiser’s summit monolith finally came into view. 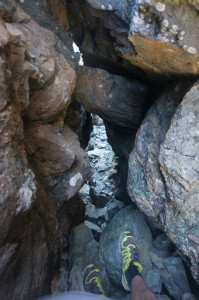 I descended along the right-hand side of the ridge on a goat- and person-trail, then climbed the gully/chimney toward the final ledge, straying onto the left-hand wall to get around some steps. The final bit went through a fun little tunnel narrow enough to force me to remove my pack and feed it through. From the large platform above, a ramp led around the right-hand side of the monolith to where it eases off to low fifth class. 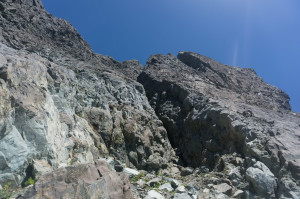 After experimenting a bit, I stemmed and writhed my way up the steep start onto the face, then carefully worked my zig-zag way up to the crest. I found the most positive holds in the golden sections, but eventually ended up trending toward the left-hand side, where a sketchy hardware-store-quality bolt told me I was on the right path. At the ridge, I found the usual PNW tat-pile, and some more very exposed third class leading to the summit, with a couple more bolts for good measure. 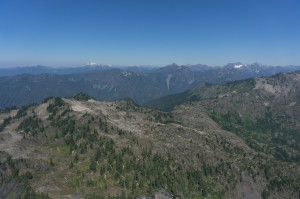 The summit consisted of two bumps, one perhaps a foot higher than the other. The flies had somehow found the true highpoint, making it uninhabitable, so I descended a bit to the north to a shady semi-platform. Enjoying views of higher peaks to the north and west, with Olympus in the distance, I resolved to find out how much work it would take to summit another glaciated peak in the mid-distance, Mount Anderson. (“About as much as Olympus,” as it turns out.) 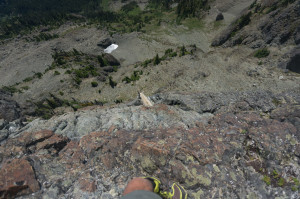 I finished my food, then returned to the dreaded face-downclimb. There are positive holds the whole way, but the easiest route wanders a bit, and the exposure is thought-provoking, contemplating my next move on the crux lower section, who should poke her head out from the platform but Mother Goat? Having failed to dislodge her from her perch before, I was not pleased by this development. I looked around for a rock to throw at her, wishing I were climbing something with more portable holds, but when I found my golf-ball-sized projectile, I turned around to find the kid staring at me instead. I wanted to startle mom away, not piss her off, so I held my fire and waited with some frustration until the two apparently got out of my way. I eventually descended to the ledge, thankful not to receive a horn in the rear. 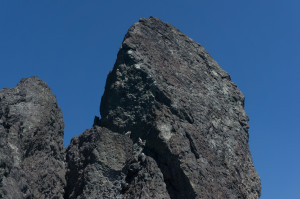 Rounding the corner to the platform, I encountered my friends once again, but there was enough room for me to maneuver around them at a non-threatening distance on my way back to the tunnel. The return was about as expected: scramble, miserable chute, trail slog. Temperatures were fairly comfortable going downhill in a daypack, but I pitied the campers headed up in the afternoon, most somewhat out-of-shape with unnecessary quantities of gear. Clearly, I need to do better spreading the Gospel of the Dayhike.

Don’t suppose you could move a bit?

Yes, you’re cute. Now out of the way.