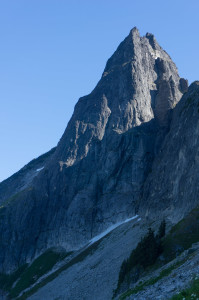 Though not especially high, Triumph is a striking peak from many points in the Marblemount area. With its steep north and east faces, it is especially notable from the southern Pickets. Triumph has been on my to-do list for awhile, so when I found myself needing both a relatively cool place to sleep and a short day, I knew it was time. Triumph being sharp on all sides, its easiest route is the 4th class west face, with the 5.3 NW and 5.6 NE ridges both being within my ability. Partly from caution and partly because they share an approach, I chose to go up the second and down the first, for an enjoyable 10-hour day.

Even up at 2,700 feet I had a sweaty night, but managed to get enough sleep before my 5:00 start. I jogged most of the old roadbed, then hiked the trail to the Trapper Peak junction, passing a pair of hiking poles and, a bit farther on, the woman who had left them. Despite the bugs, lower Thornton Lake is a popular beginner camp spot, and I met another camper as I neared the outlet. 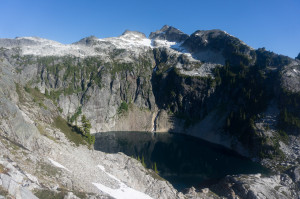 Though the official trail ends at the lower lake, a clear use trail continues around its western shore, growing fainter as it follows the stream to the middle lake. Somewhere in here the east- and west-side Triumph approaches diverge, with the former taking a chute north to the Triumph Glacier, and the latter following the ridge south and west of the lakes. Missing the junction, I split the difference, side-hilling around the middle lake on talus, following its inlet stream, then heading straight south to the ridge to regain the Triumph Pass trail. 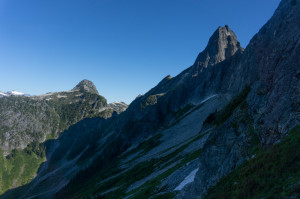 This trail continues up the slightly annoying dips of the ridge, then disappears on the long side-hill down and west of the Thornton-Triumph ridge and back up to the pass. The best route is just to give up and lose the elevation, but as often happens on such terrain, I tried to stay high, incurring some unnecessary battles with steep heather. Rather than going over to the pass, I made my way up faint goat-trails in some steep chutes leading to the base of the west face. 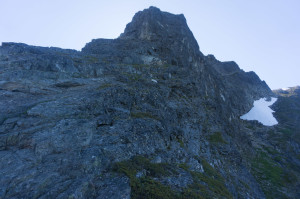 I climbed in or next to the broad, water-scoured face, then ascended left to the northwest ridge, emerging on heather and slabs below the step where the Real Climbing begins. Despite Beckey’s route description being fresh in my mind, I checked out the lower-angle left side first. However, the angle of the rock joints makes this an unpleasant mixture of slightly overhanging steps and cruddy outward-sloping slabs, so I returned and headed up the steep right-hand side as I should have the first time. 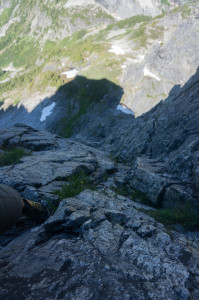 It had been awhile since I did any semi-serious soloing, so it took me awhile to get my head right as I found my way up the steep, exposed face. The holds were generally positive, but the rock was sometimes rotten, with some zig-zagging required to find the easiest way, and the general trend of the rock taking one away from the now-easy top of the ridge above the step. After a short lieback/step crux, I regained the ridge top, where more class 3-4 scrambling led to the summit. 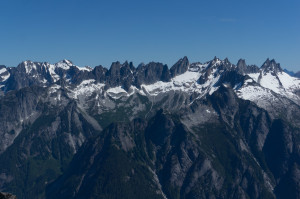 After enjoying the excellent Pickets view and scoping out the popular NE Ridge from above, I bumbled around a bit before finding the standard West Face route, which actually starts with some surprisingly-steep downclimbing on the east side of the south ridge. Below this, it crosses the ridge and descends toward the water-scoured slabs on a steep heather bench. I retraced my path down the slabs and steep gully, then found a slightly-better line back to the ridge above the upper Thornton Lake. I followed the trail along the ridge, then continued on open grass and slabs that I hoped would lead me to the lower lake’s outlet more easily than the path along the shore. This worked until the final 50 yards, which involved savage brushy combat. Then it was back to the trail for a quick hike-run to the car, and a drive to Clark’s the home of cheap showers and free bread.

Thornton Lakes from above