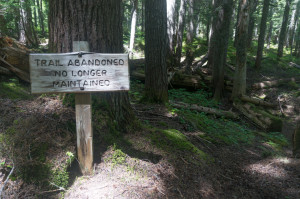 Finding myself disinclined to do Easy Pass twice in two days, and wanting something a bit easier than Mesahchie and its neighbors, I consulted my map and guidebook for awhile, then settled on Ruby Mountain, a lower summit prominently overlooking Ross and Diablo Lakes. With an old maintenance trail leading to the (unfortunately still present) radio tower on top and about 6,000 feet of gain, I thought it would be about the same as Crater. However, the trail junction has been totally obscured, so while the trail is still useful, it is essentially impossible to find unless you know exactly where to look. 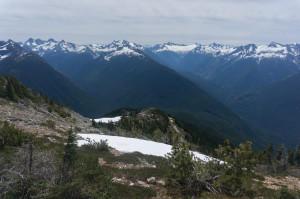 After puttering around at the trailhead for a bit, I headed up the Thunder Creek trail, crossed a bridge over the glacially-blue stream, and started up the switchbacks to Fourth of July Pass. A campground near the pass, and access to the other side from highway 20 via Panther Creek, make this a popular beginner overnight hike, so I passed the occasional family or newbie on the climb. Beckey’s directions suggested that the old trail turned off before the pass, so I turned off into the campground to search its far end for a junction. It seemed like a likely place, but I found nothing. 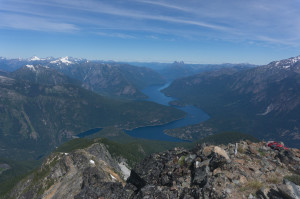 Eventually returning to the main trail, I continued a short way, then left it at a red spike in a tree on what looked like a broad ridge in fairly open forest. Though there was no sign of a trail, I hoped that the spike meant “junction,” and that I could find other trail signs once the forest became more dense. Unfortunately, though the woods and brush thickened, no trail materialized, so I spent hours climbing over deadfall and bashing through underbrush. I eventually started to reach open rock slabs and small cliff bands, and finally found cairns and the old trail in one of these. From there, it was a surprisingly long but much more pleasant hike to the summit. 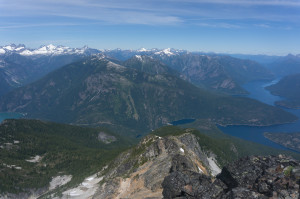 Trying to ignore the ugly radio installation, I admired the view north to Ross Lake 6,000 feet below, and south up Thunder Creek to Logan and Buckner. On the way down, I found the trail easy to follow, with regular cairns and occasional flagging. I even found a sign — hidden from the Fourth of July Pass trail — declaring it unmaintained, though the junction itself is essentially invisible and possibly deliberately obscured. To find it, continue past the campground along a side-hilling section and into a broad, flat area. At a large, rotting tree stump naturally broken off about 6 feet high to the left, head into the woods. If you are in the right place, you should find the “unmaintained trail” sign within 50-100 yards.

Workout hike complete, I headed into Concrete to resupply and rest for bigger things.