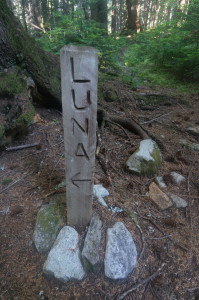 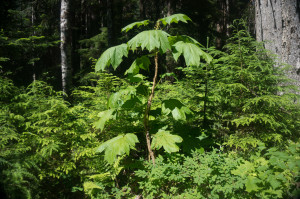 Luna and Fury, at the southern end of the northern Pickets, are two of the last peaks on my list of “hardest dayhikes in the lower 48.” The most direct approach is a 16-mile hike around Ross Lake and up Big Beaver Creek, followed by a bushwhack up Access Creek. Since Luna is easier, my plan was to do it first as a scouting mission, then repeat the awful approach once more for Fury. I had visited Challenger and the southern Pickets in 2014, finding both approaches easier than their reputations suggested, and hoped for more of the same. Instead, I found brush every bit as awful as in the worst Pickets stories, and gave up after two hours wandering along a river through a swamp full of devil’s club. Now that I know what I am up against, I should be able to handle it, but I doubt I can force myself to repeat the approach twice more this summer. 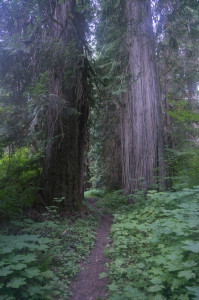 I set my alarm for an ambitious 2:00 AM, but slept right through it and started around 5:00 instead. Given the long days an an expected 16- to 18-hour outing, the late start didn’t really matter. I hiked and jogged the 7 miles to Big Beaver Creek, crossed the nice bridge, and turned left up the well-traveled Big Beaver trail. This section passes through lush old-growth forest, with huge trees, a moss carpet, and relatively little undergrowth. The trail is unfortunately and surprisingly popular with horsemen, so I dodged manure as I climbed a gradual thousand feet over 9 miles to Luna Camp. 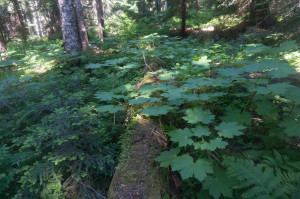 The normal route leaves the trail slightly past this point, crossing Big Beaver Creek to climb along Access Creek, eventually reaching the saddle between Luna and Fury. Trip reports I found online mention various faint markers along the trail, and a large log or log-jam near the junction of the two creeks. One would think that a creek/valley junction would be obvious, but the woods are so dense here that it is difficult to see even where the two valleys join; in all of what follows, I never had a clear view of the actual creek junction. 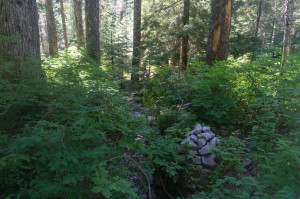 Finding Steph Abegg’s cairn, I headed into the woods along a narrow, gravelly dry stream, hoping that it would channel climbers and other animals into some kind of path, possibly with cairns. This was not what I found. Instead, after a bit of not-terrible woods, I descended into a mixture of bog, devil’s club, pine scrub, and alders. The vegetation was often too dense to step on actual soil, or even to see my own feet clearly. The best footing included old deadfall, alder trunks, and some kind of giant mutant spinach. When crossing fields of devil’s club, I found myself carefully stepping on stems to move the spiny leaves out of my way as I passed. The things seemed to be in heat, emitting some kind of frothy substance that, amazingly, was not venomous or corrosive. 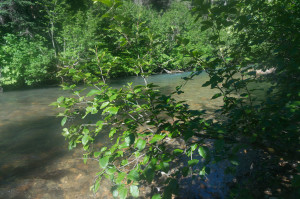 Reaching the Big Beaver, I found no sign of a log or stream junction. My (possibly inaccurate) map and GPS suggested that I was still upriver of the junction, so I made my way down near the creek along a sort of path of least resistance, periodically returning to the bank to look for a crossing or any sign of passage. I found a faint game trail for a short distance along the bank, and a few deer footprints on a sandy beach, but saw neither creek junction nor log. 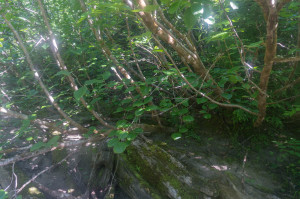 After two fruitless hours of full-on bushwhacking, I realized I should have simply forded the stream and bashed through, but I was mentally drained and possibly short on time. Even if I summited, I would not be satisfied with my time at this point. Returning to the trail, I decided to make some use of the day by checking out Beaver Pass and the start of the Eiley-Wiley approach to Challenger Arm. I continued another 4 miles up the trail, passing through multiple mowed slide paths as I climbed to the forested pass. I occasionally got glimpses of the Fury-Challenger cirque, but mostly saw a lot of green and brown. 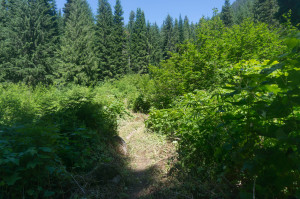 At the pass, I stopped to take some pictures of the cabin, refilled my water, and sat down for a rest before starting the 20-mile walk of failure to my car. Nearing the elusive Access Creek junction, I spent another half-hour in similarly fruitless scouting, then returned to the trail and turned off my brain for the afternoon. After re-passing a backpacker I had noticed at Beaver Pass, I picked up the pace, running past two more groups of hikers on the way to the boat dock. None of them looked like climbers, so it was a mystery to me why they would subject themselves to multiple days backpacking along a trail with almost no views of the surrounding peaks. 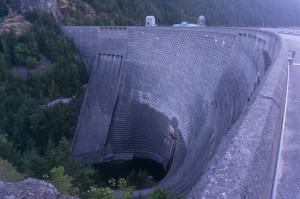 Wanting the day to end, I mustered some half-hearted speed on the downhills and flats. It wasn’t much, but I felt surprisingly functional for being over 30 miles into the day. The whole fiasco came out to about 40 miles, with 10 hours of useful travel and 3 hours of thrashing. Having experienced only the Pickets’ friendly side, I had been both chastened and educated. I hope to return mentally prepared to complete the task, but I will need some time to recover.