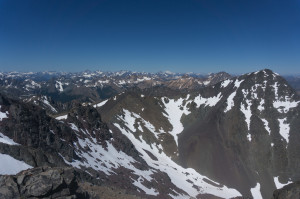 Gardner and North Gardner are two high summits on the far eastern edge of the North Cascades between Twisp and Winthrop. Despite being almost 9,000 feet high, these peaks on the dry side of the range house no glaciers, and I could have hiked them without once touching snow. A previous, less effective version of myself had been defeated by rain and the long approach up Wolf Creek, but this year they were a perfect way to knock the cobwebs off my legs after two days sitting and driving.

I woke at my favorite local camping spot, drove over to the trailhead, and started around 5:15, well into the creeping dawn. The trail descends to meet Wolf Creek, then climbs along the creek for 10 miles and about 2,500 vertical to reach Gardner Meadows. I settled into a brisk walk and tuned in some podcasts for the commute. Noticing a rustling in the underbrush, I paused the soundtrack to look for the animal. Rather than scurrying away like underbrush-sized creatures normally do, this one appeared to be approaching. The flapping and clucking soon revealed it to be an enraged grouse, hell-bent on my destruction; like Brave Sir Robin,

When danger reared its feathered head,
I bravely turned my tail and fled.

This isn’t the first time I’ve been attacked by a 3-pound woods chicken. I’m not sure how much damage one could do, but I’m too cowardly to stand my ground and find out. The things are terrifying! Are they carnivorous, or do they merely kill for sport? 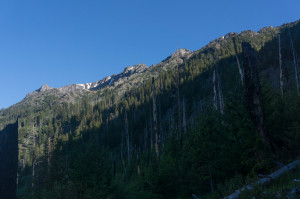 Anyways… Reaching open ground about 2h30 in, I left the trail at a convenient spot in deference to Beckey’s advice to “follow the southeast ridge from before Gardner Meadows.” I found relatively easy going up to the ridge, passing a deer that, fortunately, decided to flee panting up a ravine rather than attack. 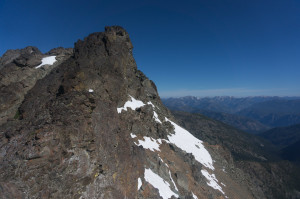 Unfortunately, what I ended up on (er… the thing upon which I ended) was more like an east or ESE ridge, with lots of choss-gendarmes and false summits, which I spent a good deal of frustrating and exhausting time negotiating to reach the broad talus mound of the true summit. The register had been stolen, but fortunately someone had left a printed-out route description from somewhere in its place, so I had a recipe to follow for the rest of the day. 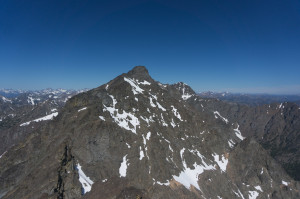 After skiing down a bit of scree to the southwest, I followed ledges and bits of faint path in a traverse to the next saddle, then continued along the ridge to North Gardner, finding a more consistent trail and a few cairns. Finding no disgusting ladybug swarms, little wind, and only a few non-biting flies, I decided to enjoy the summit for awhile. I ate my remaining food, found a flat spot, and half-dozed for an hour, sometimes opening my eyes to admire the view. The Cascades are most impressive from the northeast, with their glaciers on best display, and North Gardner, near the northeast end of the range, has a superb view of peaks from Glacier to Baker. 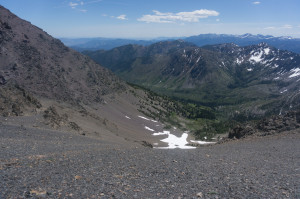 Finally getting moving again, I returned to the knob where the ridge turns east, then had an excellent scree- and snow-ski down to the valley above Gardner Meadows. After a bit of a fight with some deadfall — a twig managed to punch through my worn-out shoes and almost stab me in the foot — the trail materialized, and the rest was just mindless trail-work. I stopped in Winthrop to re-up on bug spray (I’d rather eat DEET than get West Nile), then drove west into the real Cascades for the start of the season’s Serious Business.