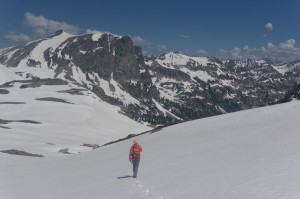 Off to south Cascade

In addition to climbing, the Tetons are made for long loop hikes and runs. With the Crest Trail running behind the major peaks, and the Valley Trail running along the eastern base, it is possible to go up one canyon (with or without trail), follow the Crest Trail to another, descend it, and return to the start along the Valley Trail. Unfortunately, the high-elevation Crest Trail is only a trail in mid- to late-summer, when I am elsewhere. Despite the sometimes-frustrating snow, I have managed to do a couple of these loops this year, and if I were more of a trail runner, I would probably come back for more while they are in season.

While Cascade Canyon features easy access and a crowded trail, Avalanche Canyon is famous for the bog blocking one end and the Wall blocking the other. On the one hand, I had always wanted to visit the Wall, a striking limestone cliff visible from the Jackson Valley, and to tag Veiled Peak, one of my last unclimbed summits between Death and Moran Canyons. On the other, I had tasted the bog once, and was not eager to do so again. Free time and Kate’s perverse fondness for the place finally moved me to return this year. 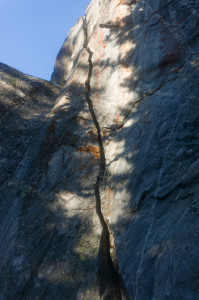 Starting off from the Ranch, we headed toward Braggart and Tadley Lakes, then thrashed around a bit until we found the reasonably well-used (more by wildlife than by humans) Avalanche trail. A recent windstorm had downed a number of trees around the park, adding more obstacles, but not enough to make it significantly worse than it was before. Passing a giant boulder split by a perfect fist crack, we made our way upstream though dense forest, trying to avoid both the bog in the center and the large talus on the north side. The trail mostly follows subtle high ground in the forested canyon bottom, with a few forays into the bog and one onto the boulders. Finally emerging from the dense forest, we crossed a large slide path descending all the way to the creek and reached the fork between north and south canyons. 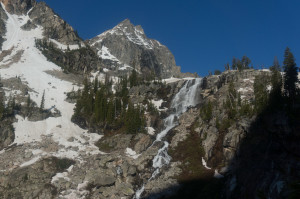 Taking the north branch, we skirted the impressive Taminah Falls to the north on scree and talus, finding the occasional cairn or bit of trail left by climbers headed to the supposedly good but seldom-climbed arêtes on the north side of the canyon. After pausing at half-melted Taminah Lake, constantly reshaped by fresh rock-slides, we continued to the equally large and mostly frozen Snowdrift Lake, crossing snow just soft enough to kick steps in running shoes, and patches of the underlying heath. 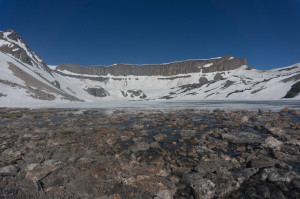 Kate was apparently happy to just hang out under the looming Wall, so I “sprinted” off to tag Veiled and rejoin her near the pass into Cascade Canyon. My hoped-for sprint was actually a bit of a slog, as the northeast-facing snowfield leading to Veiled’s east ridge had turned to slush under the northern morning sun. After extracting myself from the slush near the ridge, I spent awhile cliffing out on the dry south side before traversing around the north to reach the summit on chossy, wet class 3 rock. 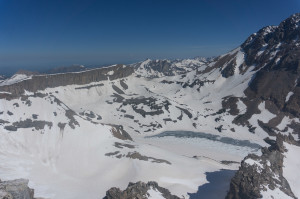 Wall and Snowdrift from Veiled

Rather than return the way I came, I decided to continue west along the ridge, hoping to traverse the Wall, or at least find better snow. After another cliff-out on the south side, I found a circuitous route down the north ridge, then back through a gap in the east ridge to the scree below. The south-facing slope to the west was mostly snow-free grass, so I was able to jog and make good time, but the southern end of the Wall was guarded by an unpleasant choss-cliff. I could probably have looped around south to gain the top, but I wasn’t sure if I could get off the north end. Rather than boring Kate by potentially spending hours route-finding through rotten rock, I cut directly back across the base of the Wall on decent but softening snow. 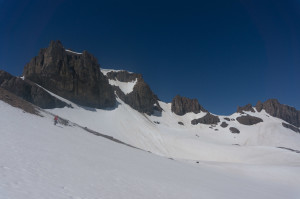 “Toilet Bowl” near the Wall

Later in the season, a trail connects the pass north of the Wall to the south Cascade Canyon trail below, but we were faced instead with miles of varied snow. After a disheartening initial plunge through knee- and thigh-deep sludge, we found good walking and even what looked to me like a perfect boot-skiing hill. Kate was reluctant, but it has been my mission this summer to spread the Gospel of the Boot-Ski in the Tetons, and I managed to convince her to give it a try. The runout was not great, but fortunately nothing bad happened, and I had another convert. 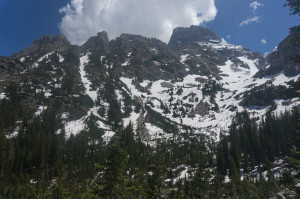 NW ridge of Enclosure from Cascade

Quite a bit of sludge-trudge remained, but it was warm and the views of the southwest side of Owen and the Grand were impressive and relatively new to me, so I squelched along happily, looking down just enough to avoid tripping. We stopped for lunch at an apparently-popular rock outcrop with a clear view of the northwest ridge of the Enclosure, the Valhalla Traverse, and Owen’s upper north face. This is another area I would like to explore, though I am not sure when, since most of the climbing would require a partner. 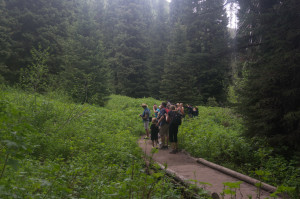 From the junction with north Cascade Canyon, we faced an increasingly tourist-choked hike to south Jenny Lake, then a walk along the bike path back to the Ranch. While Cascade is a nice hike, with its impressive views of the steep north faces of Owen and Teewinot, we were both back on familiar ground and somewhat impatient. Thus it seemed like a good idea, when we reached Inspiration Point and saw 50 canvas bags of rocks and no workers, to try to poach the closed trail down its south side. Bad idea: no more than 100 yards down the trail, a worker emerged from hiding, silently making the universal sign for “WTF?!”

After some not-so-convincing feigned ignorance on our part, we meekly retreated to the roundabout trail to the boat dock. As a small consolation, the hiker trail along the lakeshore had finally reopened, sparing us the rolling, boring horse trail higher up. Unfortunately, the trail crew had apparently packed up just minutes after thwarting us above, so we got to meet the same worker again on the way around Jenny Lake. He apparently didn’t hold a grudge, and we even talked a bit while we paused to watch three healthy kits and a vaguely protective mother fox in the boulders near the trail.

I was glad to have company on the final stretch, as the long walk along the flat, paved bike path began to wear on the soles of my feet, which had been softening and marinating in snowmelt all day. The whole thing ended up about 12h30 at a fast walk with some breaks, the most time I have spent on the trail since last season. With jogging and dry trails, it would have been a pleasant and more manageable 7-8 hours.

Wall and Snowdrift from Veiled

Grand and Owen from SW

“Toilet Bowl” near the Wall

Off to south Cascade

NW ridge of Enclosure from Cascade