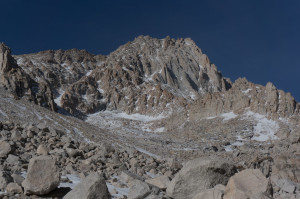 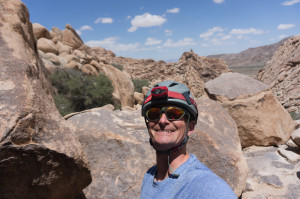 It made sense at the time

After a couple unusual days in SoCal waiting for the new snow to cook down in the Sierra, I rallied back up 395, left my bike at the Cottonwood Lakes trailhead, and drove back to Tuttle Creek. Driving at night and unsure of the road conditions, I backed down from about 6,600′ to a camp spot at 6,500′. The road was every bit as sandy as I remembered, but my “new” car is more suited to such things than the Celica I drove last time, so I didn’t leave it on three wheels in the middle of the road. 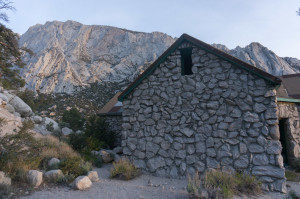 Compromising between my need for sleep and desire to get on a northeast-facing snow climb early, I set my alarm for 5:00, and was hiking by 5:30. After passing the “trailhead” around 6,900′, I followed a well-defined trail to the ashram, then continued along what was essentially a cairned game-trail up the north side of the south fork of Tuttle Creek. The trail stays 50-100 feet above the stream to avoid the worst of the brush, finally climbing steeply to an open area where the valley broadens. 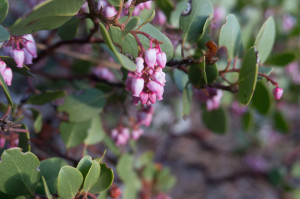 The trail fades as it climbs through this section — most people are smart enough to do this snow climb while there’s snow — but a line of cairns eventually crossed the stream and makes its way along the base of the talus to the base of the couloir. With the insanely-dry Sierra winter, what I remembered as low-angle snow last time was instead a vast talus-field partly covered in fresh snow, with some slabs to one side. The snow was breakable crust over sugar, so I treated it as lava, hopping from rock to rock where I could where I couldn’t march up the bare slabs. 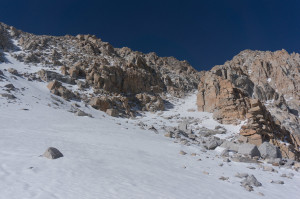 Finally turning the corner into the main northeast couloir, I saw that it was well on its way to melting out, but a winding line of snow remained. The snow seemed easier than the loose debris beneath, and I was here to do a snow climb, so I took out my axe and started kicking steps. It was a bit of a mess, with new, drifted and/or crusty snow over the remaining winter snowpack, but with a bit of experimenting I was usually able to find a supportive line, sometimes even following an old boot-pack. 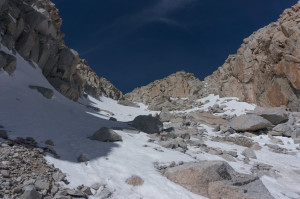 Somewhere around 12,000′ the snow finally became steep and hard enough to require crampons, which I donned sitting on one of the many exposed rocks. The branch I chose eventually melted out a couple hundred feet below the summit plateau, so I went back to scrambling from rock to rock until I topped out. Like last time, the temperature dropped dramatically as I transitioned from the sheltered snow of the couloir to the wind-blasted summit. I found a sheltered spot, read the register (other people complaining about the poor snow quality in the NE couloir, mostly), and took a look at the surroundings. The area south toward Horseshoe Meadows looked mostly dry and warm, while the alpine lakes between Langley and Whitney were still frozen. 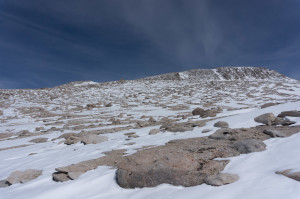 A sane person would go back the way he had come, but this was a “work” climb, so I headed off on some version of the standard route to Old Army Pass. With the crust-over-sugar snow everywhere, I quickly lost the increasingly-established trail, cliffed out a bit, and spent quality time punching through the crust and then bashing my shins on it. My optimistic belief that the spring Sierra in a low-snow year would be as friendly as the summer Sierra in a normal year was proving ill-founded. 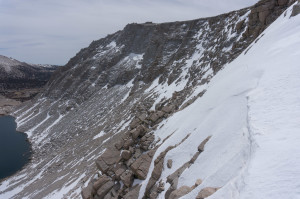 Old Army Pass was every bit as treacherous as one would expect early-season, with a steep, hard snow-slope covering the normal summer trail. I bypassed parts, carefully side-hilled others in crampons, and eventually got below the serious snow a few hundred feet above the highest Cottonwood Lake. Now there was nothing left but the standard sand-slog back to the trailhead. I passed only two people on my way through the normally-crowded area, reaching the trailhead to note happily that no one had stolen my bike. Now for the fun part. 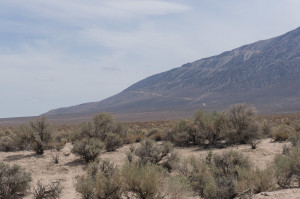 I hit 42 MPH on the first drop, ground out the little climb, then sat up and braked to keep my speed to a sane 30-35 MPH on the straights and 20 on the turns. I felt pretty stoked as I blew past some people walking down the road, probably hoping for a lift. Rounding the final turn onto the last, straight switchback, I assumed my best tuck and let go, and was elated to hit 51.8 MPH before reaching the valley floor. 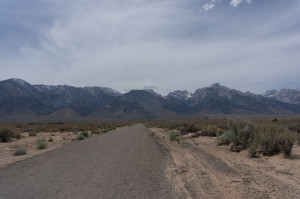 Climb back to the car

The road drops more gradually to the Tuttle Creek turnoff, so I could cruise along easily at 20+ MPH for awhile. Unfortunately, I had something like an 1,800-foot climb from Horseshoe Meadows road to my car, and was completely out of water. I could take it easy on the roughly-paved Granite View road, but the sandy track to Tuttle Creek was another matter. It was a long, grim slog, with several stops, a bit of walking, and a terrified slow-motion sprint past some jerk’s bee colony right next to the road. After about 9h30 of varied “adventure” I was back at the car. I’m glad I did it, but wouldn’t do it again.

It made sense at the time

Climb back to the car