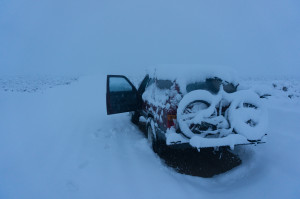 My plan for this season was driven by (changing) climate, with the increasingly-normal dry California winter convincing me to start in the Sierra. Unfortunately climate is not weather, as this past week has proved, and I must adapt. 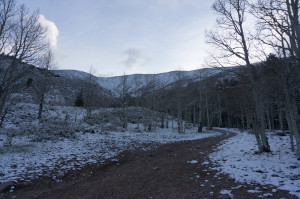 After filling up in Ely, I drove up to Timber Creek Campground, where a dusting of snow from the previous day’s storm was taking its time melting. My goal up here was North Schell Peak, one of two ultra-prominence peaks in the area I had yet to tag. (The other, Ibapah, is something like 100 miles of dirt from the nearest pavement, making it unappealing.) The forecast for the next day called for cold and wind, but relatively little precipitation, so this was the best chance I would have. 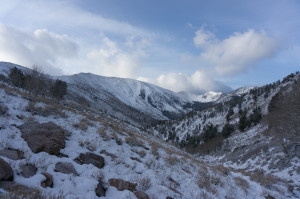 Thanks to the time change, I was on the trail at 6:10 without an alarm, easily following the faint climbers’ path under the dusting of snow. I had downloaded the route description the previous day, but mostly ignored it, as I could see the peak from the car. Despite North Schell having 5,400 feet of prominence, the climb is only 2,500 feet and a bit over two miles.

The trail follows the north branch of a stream, circling around the west side of the peak as it climbs. Where it finally disappeared under an old snowbank, I continued along the stream, then followed game trails north to gain the ridge, where I had my first taste of the eyeball-freezing wind. As I gradually realized, I had emerged well northwest of the summit, and so had a long, cold traverse back to reach it. I meandered back and forth, trying to optimize my route over loose scree, grass, and drifted snow while occasionally turning to warm my right eyeball. 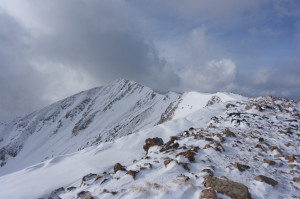 Cold ridge to the summit

Finally reaching what I thought was the summit, I saw the actual summit another quarter-mile to the south. By this time my feet were getting cold, but it was too cold to stop and put on plastic bags; I just had to get it over with. I slogged on to the summit, where I savored the experience for all of five seconds before retreating along a more direct route to the stream and trail. The whole experience had taken a mere two and a half hours, leaving me plenty of day to do something else. 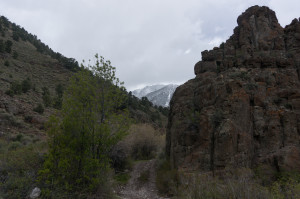 I was headed along highway 6 to Bishop, which passes right through the White Pine Range, one of the better of Nevada’s many small mountain ranges. Stopping in the Ely McDonald’s for breakfast and internet, I determined that the loop over Currant and Duckwater Peaks would be right along my way, and should be feasible in the long afternoon if the weather held. Leaving the highway toward the White River campground, I followed the good dirt road for 10 miles, then turned left on the slightly less-good FR-407, and right on a much worse spur road. Parking near a rock dike protruding into the ravine, I watched some graupel pass, then put some more warm clothes in my pack before starting up the deteriorating road toward Currant’s impressive summit crags. 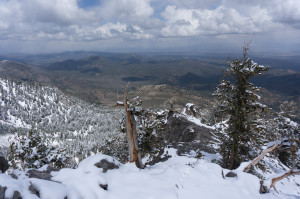 The route description mentioned following an old logging road to enter a ravine, but the main road and adjacent fields seemed much easier, so I just did that, leaving the road to follow deer- and cow-paths straight up open terrain. As the path of least resistance headed too far north, I left it to follow a ridge heading southwest toward what appeared to be Currant’s summit. The ridge was a mixture of manageable pine forest and rock outcrops; the rock, reminiscent of Eagle Peak near Death Valley, was incredibly sticky when dry or wet, though much less certain when covered with fresh wet snow. 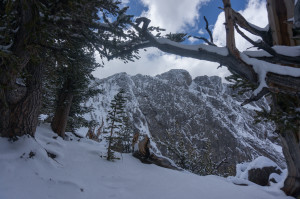 I stayed on the ridge crest to avoid side-hilling where possible, though a couple of narrow sections and serrations forced me into the ankle-deep snow on the southeast side. Showers constantly threatened to the south and east, but for some reason stayed where they were. One final, larger serration near the top forced me to detour 100 feet down the south side, until I could scramble and slide into a gully returning me to the base of the summit slabs. 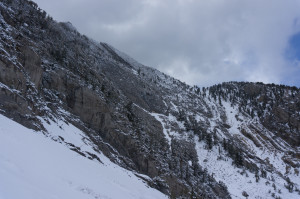 Being super-sticky rock, this class 3-4 slab would have been a quick romp when dry, but was somewhat more complicated when covered with patchy ice and snow. It was still fun and non-threatening, but kicking steps, sweeping off foot-holds, and routing around difficulties took time. After a few final, somewhat more tenuous moves, I reached the summit ridge, to find I was well north of the summit, and in for some Serious Business. 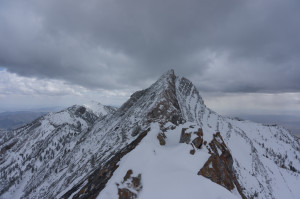 Currant’s north ridge extends in a long, jagged knife-edge well north of the highpoint. Most of the climbing is only class 3-4, but with the snow obscuring the angle of the top of the ridge, it was slow and sometimes nervous going. On a couple of the steeper narrow sections, I was forced to go a cheval, an uncomfortable maneuver on sharply-textured rock. The crux was a rotten drop just after a cairned sub-summit. Kicking off as much of the snow and loose rock as I could, I downclimbed about 6 feet to a gently outward-sloping ledge, psyched myself up, then jumped the remaining 6 feet to a dirt flat on the next part of the ridge. Desert peaks aren’t supposed to be that hard! 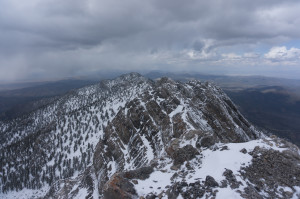 North along knife-edge toward Duckwater

Currant had taken more time and mental effort than I had expected, so after glancing at Duckwater, I headed down Currant’s standard route without hesitation. Unfortunately, the top of the chute one is supposed to follow is not obvious from above, so I got to spend some quality time cliffing out in other, lesser chutes filled with thigh-deep slush. I eventually found my way to the bottom of the correct chute, then postholed my way down a ravine to the bottom of the snow. Other than some dry-falls that required a little scrambling to bypass, the rest of the hike to the car was straightforward. I found the “old logging road,” but it was almost invisibly faint, and near-invisible where it joins the main ATV track. 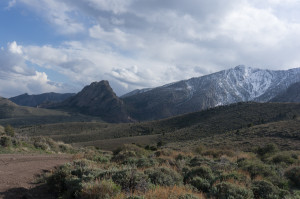 I returned to highway 6 by following FR 407 south, which was rougher but more direct than retracing my route. After filling up at the secret ghetto station in Tonopah — one of the most depressing towns in America — I drove on into the night, crossing Montgomery Pass into California before pulling off on a well-graded dirt road to sleep. Though it was bare dirt when I nodded off, I woke to find a half-foot of snow outside. Fortunately I had four-wheel drive, because otherwise I would have been stuck until someone decided to wander down this random road to nowhere. With 6″ of snow at 7,000′ in the Whites, there has to be well over a foot in the Sierra. In the short term, weather trumps climate.

Cold ridge to the summit

North along knife-edge toward Duckwater

This entry was posted in Climate, Nevada. Bookmark the permalink.